It’s completely to Red Alert’s detriment that it will automatically be compared to Sideswipe. Because that’s a fight that just isn’t fair.

Thanks to my patrons who help make galleries like this one possible! Backing me on Patreon for $5 per month can get you exclusive early access to many of the new galleries I post, as well as getting your name added to the title and thanks page that goes with every gallery. Plus, you pitch in to make sure I can make more content just like this! Head over to my Patreon page right now to find out more and sign up! 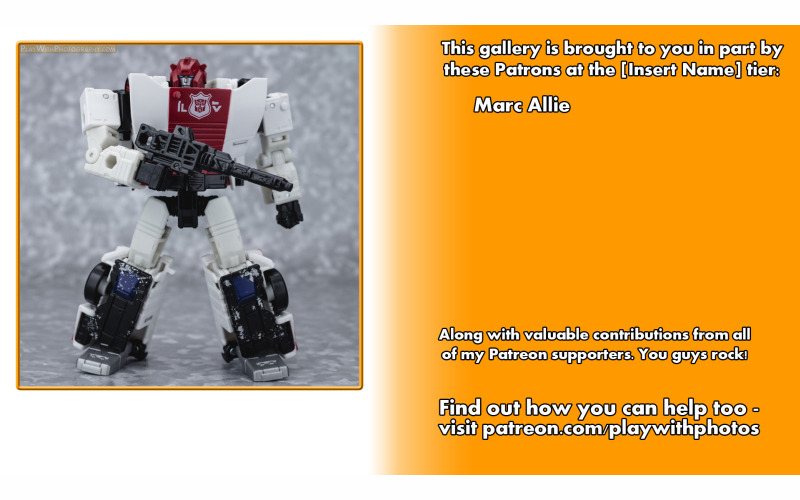 I originally decided to buy Sideswipe because I could get it cheap. When Siege launched, I was strongly in the camp of not rebuying characters that I already had perfectly good toys for. But taking a chance and grabbing Sideswipe along with Flywheels, Sideswipe was an unexpected hit. Such a great feeling toy, and looking at the 2008 Universe version again afterward, I started to feel there was no real comparison. And thus I went broke. Well, not really, but that event did expand my purchase plans substantially.


Red Alert should equally be a hit, but it’s not quite getting there. The engineering of course is exactly the same, so it’s not as if Red is taking a risk or being experimental and falling short. No, the issue at issue is simply QC. Or tolerances or whatever you want to think of it as. Sideswipe was notable to me for how smooth and near-perfect the movement of the joints felt, as well as the fittings of various parts during transformation and when it was all settled in whichever mode. There were minor flaws, sure. That whole bit of the abdomen plate not being held down by its tab like it sure seems it should be. But that also never caused any problems, so who cared? Everything that had to work did, and very well. One or more of the different color plastics Red Alert introduces just doesn’t seem to be playing well. 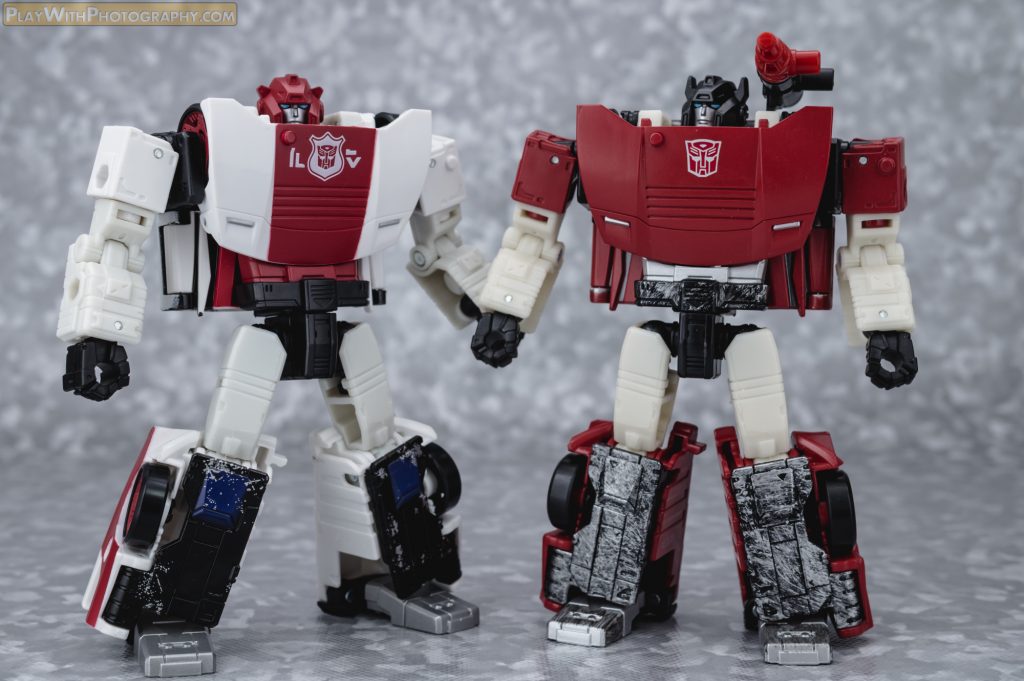 Joints, especially where some of the black plastic is involved tend to feel a bit gummy. It’s not the same kind of thing where you fear plastic is going to tear from intended use, but the action isn’t smooth and you have to fuss with it a bit to get precise poses exactly how you want them. It’s not a pleasant tactile experience. In a vacuum, I don’t even think this would matter that much. It’s simply because Sideswipe was such a great baseline to compare against that this stands out so much. Getting the little hinged car body panels to tab in the robot arms in car mode is also difficult. That’s not a very necessary thing to have work though; the panels stay in place of their own accord and the arms have room enough to get out of the way of the tabs if they have to. And on my copy, the waist swivel seems to have a bit of a burr or something, because the lower body slides a little off alignment when rotating for transformation. You have to push the lower body back in place or else the front and rear car halves won’t line up.

Those are the problems I’ve had. All are objectively minor and barely affect the toy in any way that can’t be corrected or worked around with virtually no effort. They simply feel like a tragedy because the other use of this mold ended up being so much better overall. But Red Alert has good things too. I really appreciate that they created a minor design variation on Sideswipe’s helmet so Red isn’t a 100% redeco, but actually has a minor physical difference. 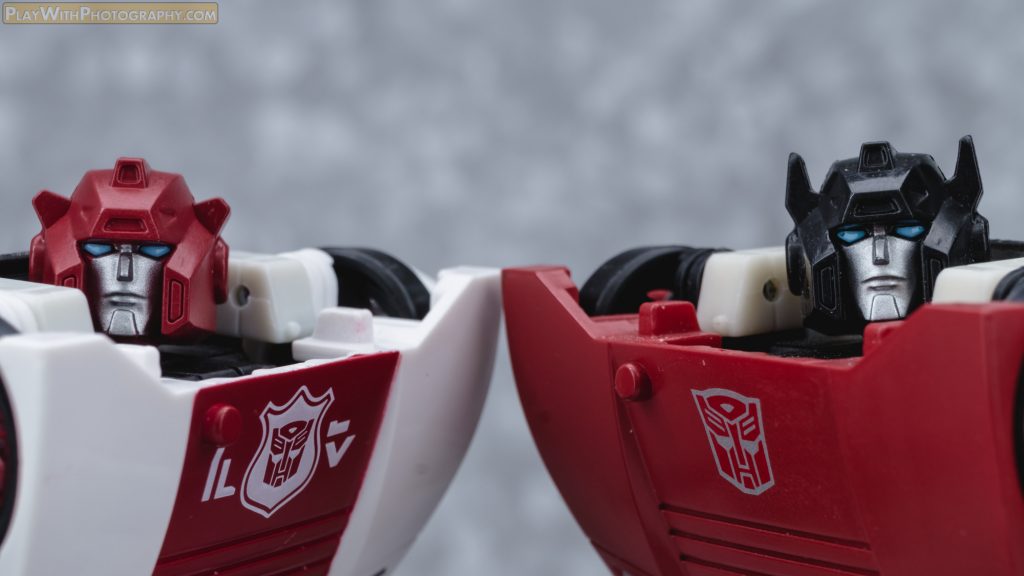 Including a rifle is great, especially when they’d have been well justified in just reusing Sideswipe’s accessories. The recommendation to attach the light bar to the rife and use it as some sort of club or axe or I don’t even know what is bizarre, but nobody’s holding a gun to your head to force you to hold a light bar to your gun. 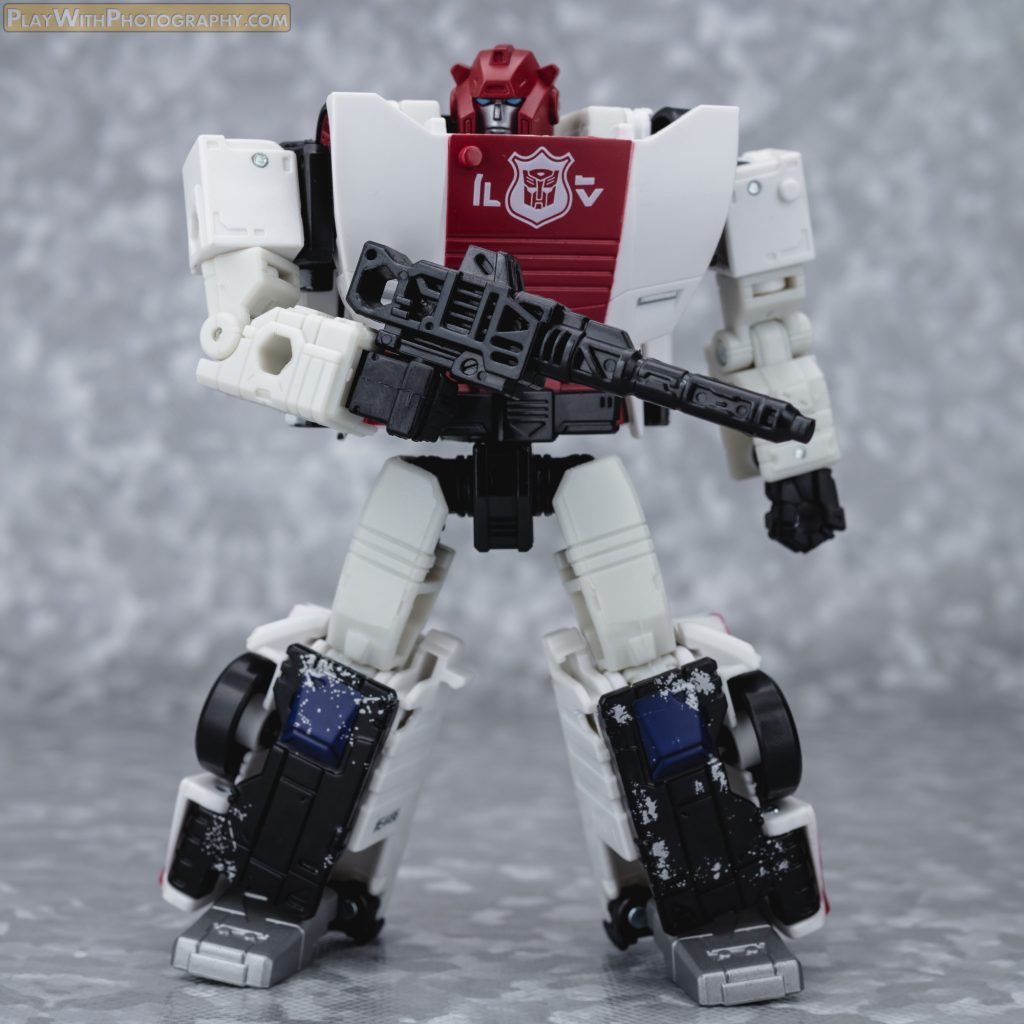 Red Alert was easier transforming the legs the first few times than Sideswipe, too. Sideswipe’s shin panels seemed to be over-painted or something and were super difficult to open up, especially starting back from car mode. Red gave a lot less struggle there. And in the area of those panels, look how much less damage paint Red Alert has overall! I think the shin panels are the only place any shows up! 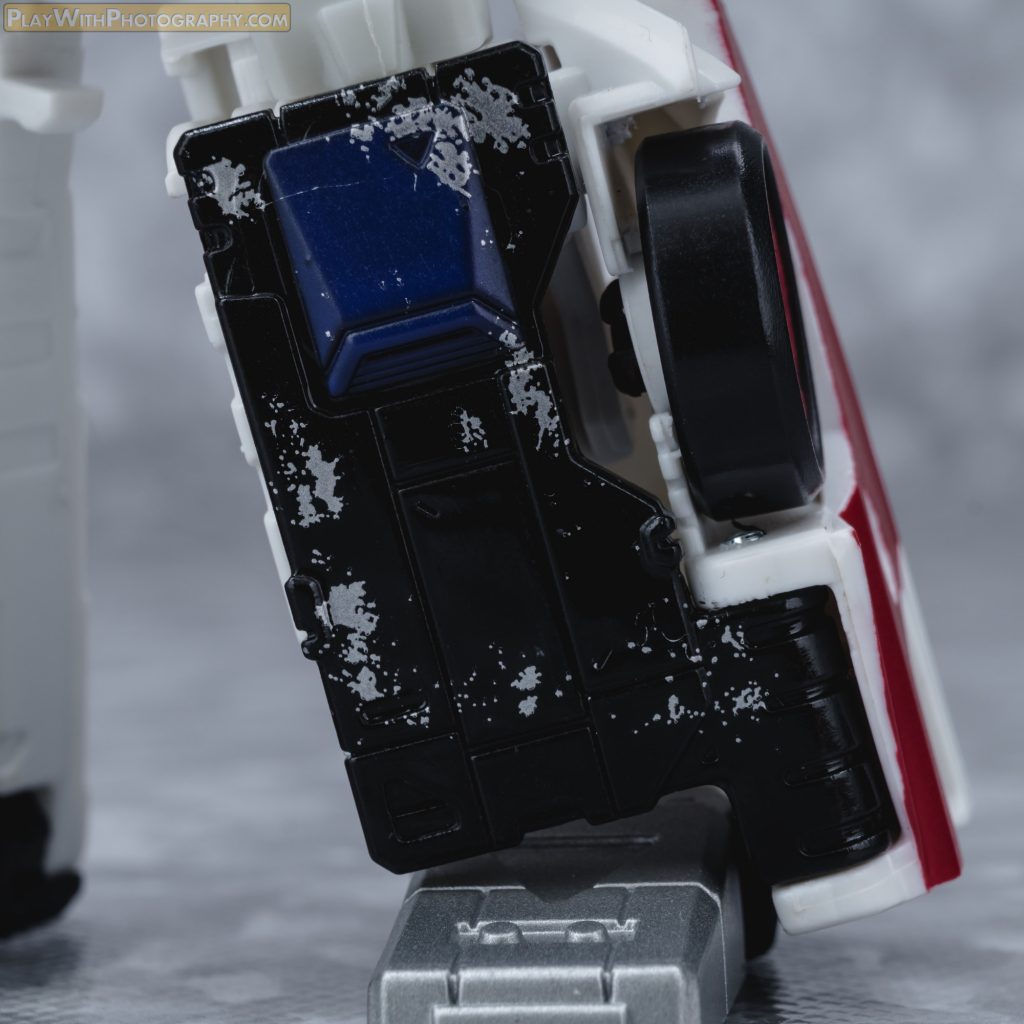 It’s weird too, but in this version, I don’t even mind the roof being all “glass”, while that still looks wrong to me with Sideswipe. I couldn’t begin to describe why or what the difference is, but I’m just fine with it here. 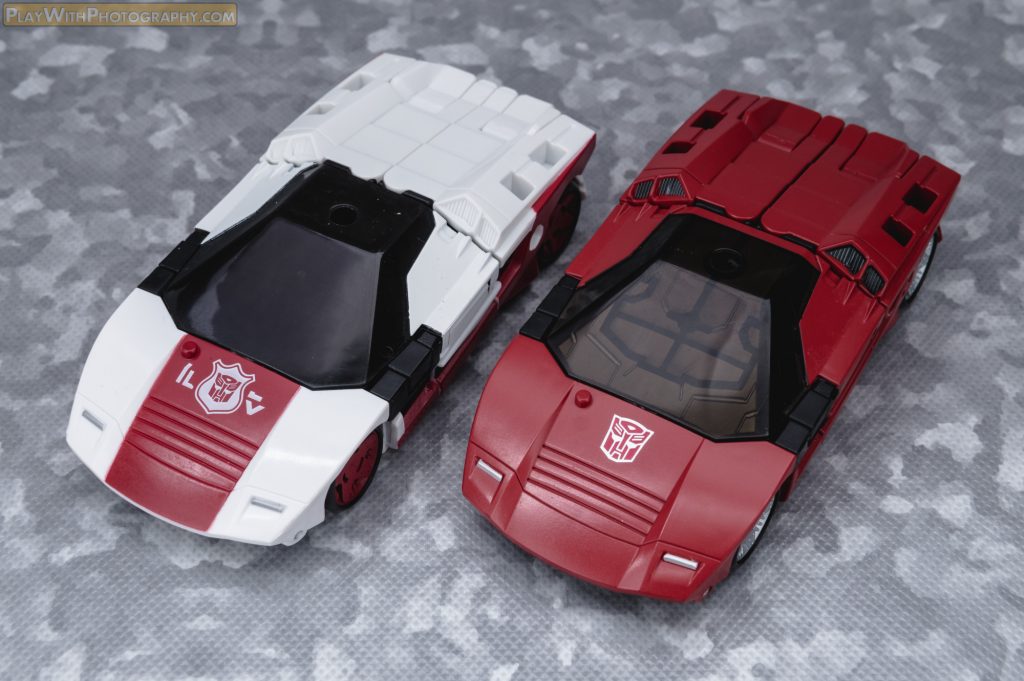 Red Alert isn’t a perfect redeco, and my copy at least leaves more than a little to be desired. I probably went in with expectations a little too high though. I had a lot of fun with Red Alert through shooting the gallery (aside from an absurd number of reshoots I ended up having to do that delayed this gallery for a couple days) and as long as you aren’t expecting lightning to strike twice, you’ll have a more immediately satisfying experience than I did. 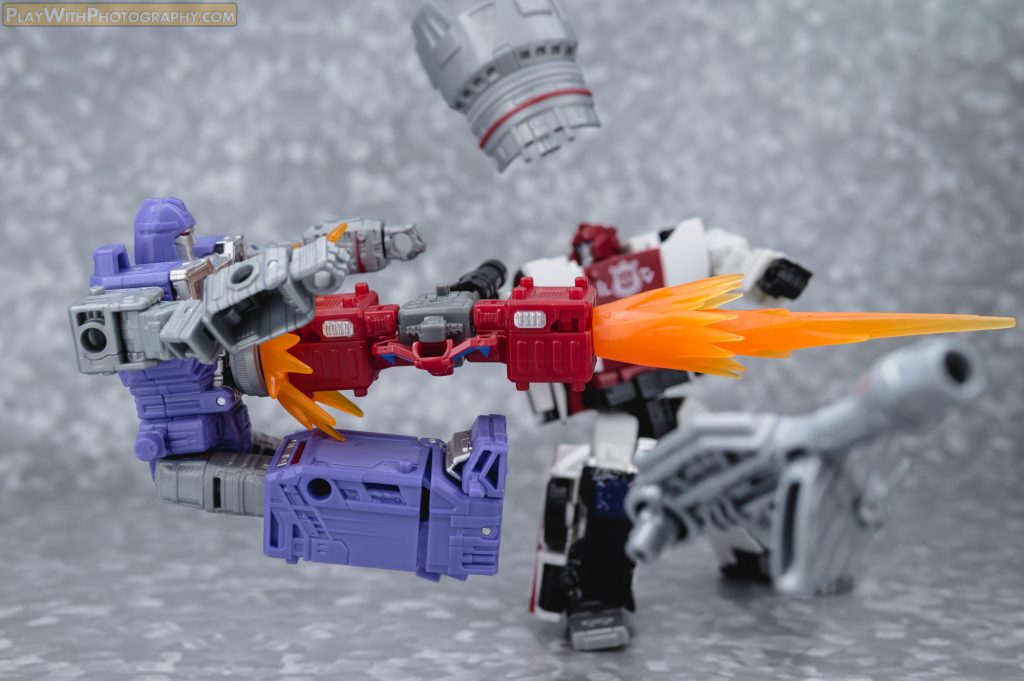