It’s a delight to be able to bring you perhaps the very first in-hand photo gallery of the new Voyager Megatron from Transformers Siege! Previously the closest contact anyone has had was the select few invited to events like SDCC and New York Comic Con where the toys could be viewed in person on display, but with this assortment starting to make its way to retail in the United States, we can go for a much more involved examination of the toy. There’s 88 photos waiting for you in the gallery… 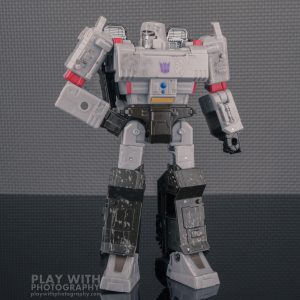 It’s kind of amazing looking at this toy in person. It’s certainly not a 1:1 realization of cartoon Megatron, but it’s by far the closest in appearance to that benchmark that we’ve had outside Masterpiece, and it works really well. Combiner Wars Leader Megatron was maybe the next closest in trying to nail the look, and while it did things I liked, it always felt stiff and restricted in what it could do in robot mode. Eventually I sold it. Siege Megatron has no such problems. My specific instance has a weak outward joint on one hip, so bearing the toy’s weight in some poses doesn’t work. But without that QC flaw, I don’t think I’d have anything to complain about as far as what Megatron can do in posing. 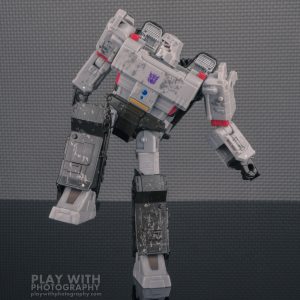 The face is a great take on Megatron’s model, something that’s always seemed hard for anyone to really get right. This one still isn’t perfect, but it checks a lot more of the boxes than most of the Megatron’s I own or have owned. And fortunately Megatron is not among the number of Siege toys with egregious levels of sculpt detailing over the body. Visually it’s pretty well balanced. 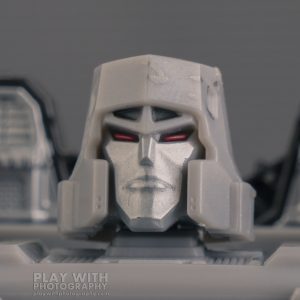 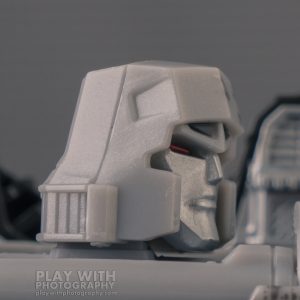 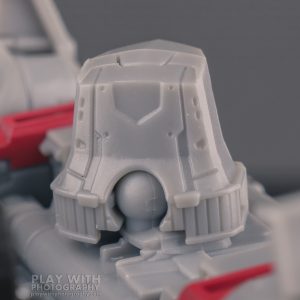 …which I guess brings us to everyone’s favorite topic: Battle damage. Megatron’s damage deco isn’t super intrusive, to me. It might help that it’s silver paint on various greys, so it might blend slightly better than if it were over bright colors. I didn’t buy Optimus, so I can’t really use that as a point of comparison. But I like one effect of the silver paint: Depending how the light hits it, the damage ends up looking either light colored like bare metal under a scraped away finish, or dark like foreign matter splattered over top of the surfaces. But if even that doesn’t help you let it pass, it doesn’t seem like the battle damage paint is layered over any other paint, so it’s probably safe to try to remove it without risk of hurting anything else. I do think some small deco elements were probably lost in favor of this. The toy seems a little light on paint cover overall when you look past the damage applications. 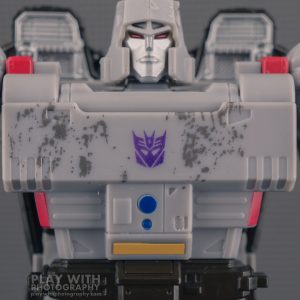 I like the tank mode well enough. It fits together solidly, and pretty easily when you get a handle on what you need to do. The current round of instructions are garbage, as per usual, I guess. One important step, flipping up small elements on the shoulders to cover the “hammers” is vital for the tank to fit together, but while a whole step in the instructions is devoted to that, I had a terrible time discerning what was actually being required since they use a full body image to depict moving two tiny pieces. And continuing for however many years it is now, the flat paper the instructions are printed on does it no favors, dulling the contrast terribly. If Hasbro Asia continues using gloss paper for their Siege releases, China will once again be getting the far more readable paperwork. 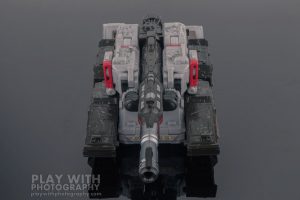 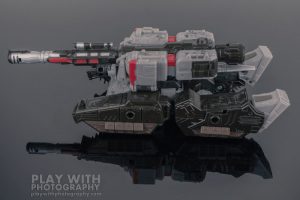 Oh, but I was talking about the tank. H-tank though it is, I like that it uses some of the robot panels to fill in the gap between the front tracks. The head also hides under all that, though you’d have to flip it over to end up seeing it. Pretty good result, all told. 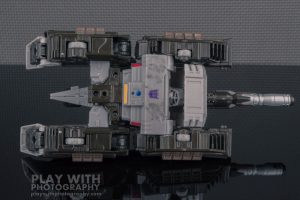 The weapons aren’t quite what I expected. Or, well, the fusion cannon is totally fine, but the sword and rifle didn’t end up being what I thought they would. The sword blades aren’t intended to detach from the rifle, something that I don’t think had really been communicated before. It makes it awkward to use the really cool looking rifle as a rifle since you need to dispose of the blades somehow. They’re attached by mushroom pegs, so they can easily be slid off their mounts non-destructively. of course they can’t be used anymore at that point, but if you care more about the rifle, it’s an option. Honestly I’m annoyed they didn’t set them up as 5mm peg attachments since they’d have gotten two extra weapons essentially free for zero added engineering effort. 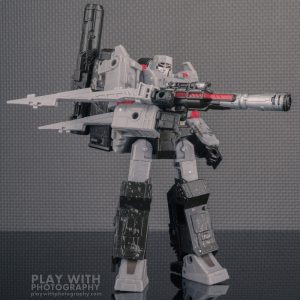 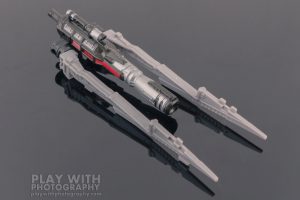 But overall, I’m pretty well pleased with this. It’s not daring at all. It’s almost the definition of playing it safe in terms of design choices. But while that may be a little boring to those of us well and deeply familiar with the usual bag of tricks, it does have the benefit of letting the toy focus on being a good rendition of a specific style of Megatron. For the SRP of $29.99, I don’t think this will be a disappointing purchase. I’m certainly quite fine with it – though I did come in just a tiny bit under SRP where I got mine, but I don’t think that’s affecting my opinion. Right now the product page is active on Amazon, though only stocked by marketplace sellers at a premium. I wouldn’t suggest paying the Early Toy Tax, but if you’d like to keep an eye out for stock at regular price, you can find Megatron right here. Your purchase through this link will also help out the site! And in the meantime, check out my full gallery: