Time for another Camera Blog post where I talk about a new camera announcement! Canon announced the EOS RP, a mildly-simplified version of their EOS R full-frame mirrorless camera, featuring a roughly thousand-dollar price cut versus the R, bringing it within striking distance of the price point of Sony’s current Alpha series APS-C offerings. But would it be any good for us?

First up for those not super conversant about different camera sensors, let’s recap why full frame versus APS-C is even important. A full frame camera sensor is called “full frame” because it’s basically equal in size to one frame of 35mm film, with physical dimensions of about 36mm x 24mm. APS-C sensor sizes can vary slightly by manufacturer, but in general they can be thought of as being about half the size. So if you have two cameras with the same megapixel count – 24 for example – the camera with a full frame sensor is likely to produce pictures with sharper fine detail and a “cleaner” overall quality, because it’s using twice the total surface area to capture those same 24MP. Those sensor pixels can also be bigger and less crowded because there’s more space for them. APS-C currently tops out at about 24MP, while full frame can potentially go much higher. Though realistically not very many people really need 47 megapixels, especially when you look at what THOSE grade of cameras cost.

So, with an understanding of the difference between APS-C like you’ll most commonly find in DSLRs and DSLR-style cameras and their full frame big siblings, why is the EOS RP important? Because the body is launching with a retail price of $1299. Previously the cheapest brand new mirrorless full frame camera was Sony’s A7III, with a body-only price of about $2000. Canon’s EOS R itself runs $2300 for just the body. This is a hugely significant leap in pricing for this level of camera and makes a full frame body legitimately competitive with the better APS-C options currently out there. Remember, Sony’s recently announced A6400 is right near $1000, and I think its existence is largely pointless for photographers. So let’s talk about what the EOS RP has to offer. 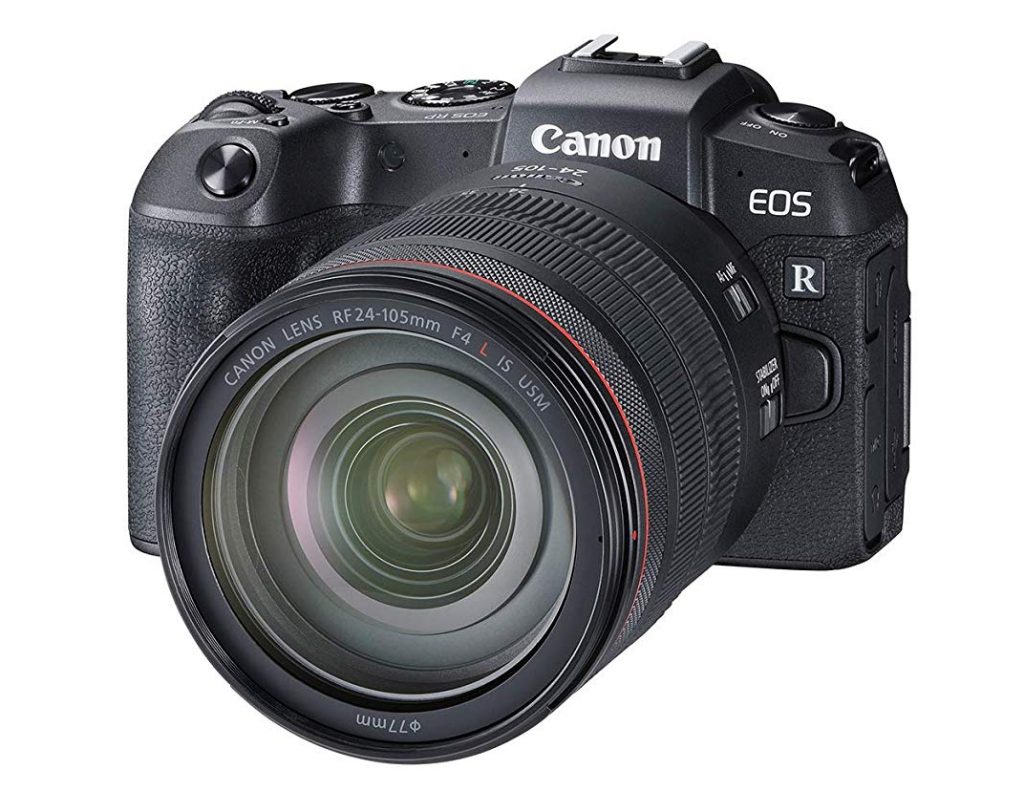 In terms of video features, the RP is a bit of a wash especially compared to …well, basically everything else in its broader product class. 4K video is hurt by losing access to the good autofocus technology, it doesn’t offer particularly high recording bitrate in any case, and its clean HDMI output is apparently restricted to just 1080p. More serious video-focused users are probably not going to find this camera a very appealing choice overall. Fortunately, that’s not really what we’re about, is it?

The EOS RP has a 26 megapixel sensor – only a small downgrade from the R’s 30MP, and still just high enough a number to look better than both any APS-C, as well as the 24 megapixel A7III. It uses Canon’s Dual-Pixel autofocus system which has delighted basically everyone who’s used it since the technology was introduced for its fast focus lock on capability, and being a Canon camera, it has a touch screen interface that you can of course use to select and focus on a subject, but also do just about any other interaction with the camera that you need to. Once upon a time I thought full touchscreen control on a camera was kind of gimmicky, but having used it for a while, I really came to like it and appreciate the speed and convenience it could sometimes offer. Apart from this, a lot of what the camera offers in photographic performance is pretty typical for what you’d expect of any of the higher end range of consumer cameras, but packed in with a full frame size sensor and some of the qualities that define Canon as Canon, like the particular rendering of colors that some people swear by.

A particular interesting feature I noticed which could be very handy for things like toy photography is a “focus bracketing” option which in practice is a semi-automated focus stacking function. You can direct the camera to shoot potentially a great many photos where it slowly crawls along the subject focusing at different points. The images can then be blended to make a photo with sharp focus from front to back. One source claims that specific Canon software has to be used to blend the images, but truthfully as long as the images are recorded to the memory card normally, you can do the same thing in Photoshop. Presumably the Canon software might make the process a little more streamlined versus the steps needed in Photoshop. On the other hand, if you’re using a full frame camera, I’d hope you’re at the point of photographing in raw format, in which case you’ll be wanting to post process the photos before merging them anyway. Figuring that part in, the hypothetical convenience of the Canon software option fades pretty quick. Ultimately, what’s notable about this feature is just the automation of it; you can focus stack with any camera where you can select through the individual focus points, you’re just doing everything yourself. The camera handling that sometimes tedious element of the process sounds very appealing, even if it might still take a minute or two for it to carry it out per sequence.

Now, as noted, the EOS RP is starting at $1299 for just the body, no lens included. A kit with one of the new RF mount lenses adds about a thousand dollars to the cost. That’s staggering, sure, but remember that any other full frame camera at a higher price point is going to basically be in the same boat in terms of body price vs kit price. However, with the Canon system there’s other options to explore that suit the needs of the kind of photography we do without inflating the cost so much. Canon smartly introduced a mount adapter when they launched the EOS R, which lets lenses from their EF range to attach to the R and RP bodies that are designed to use RF lenses. Reportedly, the adapted lenses work virtually seamlessly, opening up a lot more options for outfitting your new camera body. The adapter runs about $100, though it’s possible some retailers might opt to create bundles where the combination of body and adapter may total less than the two purchased separately.

With this adapter, we can now consider Canon lenses from outside the new mount system they introduced with the EOS R. Like the EF 50mm 1.8 STM, a very popular lens with a reputation for excellent image quality that retails for just $125. This lens is rated with a minimum focus distance of nearly 14 inches, which seems like a lot, but we have to think in slightly different terms here. Camera lenses typically have their focal lengths marked using 35mm film format – full frame – as the point of reference. That means that an APS-C or any smaller-sensor camera ends up with a different field of view versus what the lens marking indicates. On an APS-C, a 30mm lens, for instance, has a field of view equivalent to a 45mm lens on full frame. With point and shoot cameras using 1-inch class and smaller sensors, that field of view multiplication goes even higher. But that 30mm focal length example even at about a foot of minimum focus distance is still very good for being able to photograph typical size action figures, for instance. And I’ve even managed to get some very usable shots of things as small as Mega Construx figures under such constraints. And a 50mm lens on a full frame camera has even a little bit tighter view, which is a good thing in our use case.

The Canon 50mm lens is measured as having a maximum magnification of 0.21x. The easiest way to understand that is that an actual macro lens would be expected to have a magnification of 1.0 (or more!) as this describes how big the image of your subject gets projected against the sensor. 0.2 means the subject can project at up to a fifth of its actual size. A 30mm lens at a minimum focus distance of 12 inches has a maximum magnification of about 0.15. So the 50mm from a little farther away should actually get you a closer resulting shot. Aren’t cameras just wacky sometimes?

So with the adapter and the 50mm lens, you’re adding just $225 to the cost of the camera body and building yourself a starter kit for $1500 that can do good toy or other mini-studio photography. But 50mm is a favorite focal length for a lot of photographers to just go out and use as general purpose because it’s pretty versatile. And going out from there you have a lot of choices as you gradually step up in price. That was the brilliance of bringing out an EF adapter right away – even if you’re targeting a customer base brand new to full frame, you’re still increasing accessibility by letting new users come in with a very affordable starter lens before they eventually start buying in to the native system.

For starting down the road of getting more serious about photographing toys or other small things in a home studio environment, is this a must-buy camera? No, not at all. Thing’s expensive, man. Buy a used Sony A3000 kit for $200 (or a number of other relatively low-cost APS-C options). But eventually, if this is an interest that sticks and keeps developing for you, you will want to elevate to full frame. I firmly believe that you can learn to take great photos with any level of hardware – and eventually I swear I’ll get back to writing on how to do that, honest! – but it’s just a fact that every higher tier of camera offers a greater level of potential image quality when you learn it and develop your level of excellence in handling it. If you’re coming up to the point where you feel like you might have gone as far as you can with your current equipment, and are ready to invest in something bigger and hopefully better, well, this Canon looks like a worthy contender, if you have that much money to point in one direction for it. I’ve come to love what Sony is offering in their mirrorless lineup in general, but Canon is striking back hard, and when my time comes to step up to my next level, I’m going to seriously be considering the EOS RP.

Of course I’d be doing a disservice if I didn’t point out some alternative full frame options. As I’ve already pointed out, the RP is the cheapest brand new full frame mirrorless camera, so any alternatives are going to be for used equipment. That said, the original Sony A7, with a little hunting and diligence can be had for $500-$700, depending. Unfortunately it will still require a lens, and while Sony has a relatively inexpensive 50mm lens for their full frame E mount cameras, it’s more expensive than Canon’s option, and not as good. It requires a farther focusing distance, leading to a reduced maximum magnification, and its maximum aperture is 3.5, versus 1.8. And unfortunately there are very few low cost lens options for full frame Sony cameras in general, making the system harder to get in to for new users working with limited budgets. So I guess the alternatives aren’t really much of an alternative when it comes down to it. At least for right now. It’ll be worth watching to see how Sony and even Nikon might try to respond to this move, hopefully making the entire field of full frame cameras more competitive and more accessible to a wider range of potential users.