This week Sony announced two new entries for their Alpha series of mirrorless cameras, and this could be good news if you’re thinking about investing in something new. The A6100 and A6600 are following on from the A6400 in refreshing existing models to more current technology and specs. As the 6400 succeeded the 6300, the A6100 and A6600 update the A6000 and the A6500, respectively.

Content like this is made possible by you! If you appreciate what I do and would like to show your support, join my Patreon for as little as $2 per month. Or, you can help me out at no extra cost to you by doing your regular Amazon shopping by using my affiliate links like this one. Every purchase you make after clicking through my links generates a little revenue for me, but doesn’t add anything to your costs at all. Everyone wins! Except for Amazon! And now, back to our show.

Now, if you know anything at all about this range of cameras, you probably understand the distinction somewhat already. The A6600 now resides as the top of the line in the 6000 family, with a price to match: $1400 for the body only. But it has pretty much everything. Sony’s might-as-well-be magic auto focus technology, sensor stabilization (great for video or photographing without the aid of a tripod), improvements in image handling leading to better color interpretation (or “color science” as the kids say), unrestricted 4K video (no built in time limit) and a higher capacity battery. Many of these things come right out of the high end full frame A9 that costs a distressing amount of money and is geared for pro users. Seeing a lot of this hit the APS-C level in a semi-compact body is pretty fantastic. It’s also not an entirely new thing. The 6400 already borrowed the important features from its costlier cousin. The 6600 simply builds off of that and adds some extra goodies. What’s amazing though is how little is different between the 6600, and the 6100.

The A6100 is set to be $750 for the body only, and if you look at the spec sheets side by side, you’ll quickly notice how many of the fields might as well be a copy/paste from one to the other. There’s really just a few things that matter separating them. A couple are physical factors, like the 6100 still using the same smaller battery that the A6000, 6300, 6400 and 6500 do. The 6100 shares with the 6400 that there’s no sensor stabilization. Getting deeper in the functional aspects, the A6100 has a lower maximum ISO than the 6600. If you really need to try to expose a shot in a very dark situation where compensating in literally any other way isn’t possible, that might be more of an issue for you. But even at the max the 6100 can do, 51,200, the picture quality will already be so degraded on any of these cameras that it’s not like being able to jump up to 102,800 would be of much use anyway. 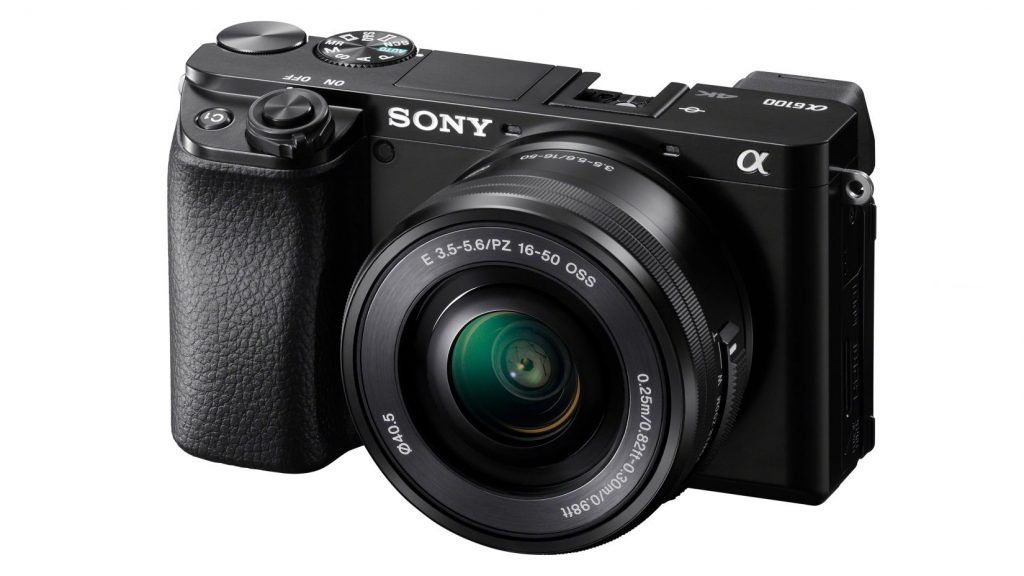 If you want to shoot video, the 6100 does fall a little bit in that regard. For one, it doesn’t get to make use of the eye-detection auto focus that’s been a huge success in Sony’s more recent cameras (but it is available for stills!) and at least one source has said that picture profiles for video won’t be available on the 6100. If you need those things, that might be a reason to think about the A6400 instead – or the 6600 if you think you need the stabilization. But the 6100 still shoots in 4K just like the others, downsampled from a 6K sensor readout for higher video image quality – something that could easily have been stripped down for a camera body at a price point like this.

All three cameras offer electronic viewfinders in addition to their rear screens. The A6100’s viewfinder is lower resolution than the other two. The screens are all the same resolution though, and all of them flip up to face forward so you can compose shots and monitor if you need to video or photograph yourself. And, that’s actually the last meaningful difference to note between the 6100 and 6600. The A6100 is simplified, but all indications are that Sony opted to make that simplification for cost as absolutely minimal as possible, which is kind of amazing and makes the A6100 a super strong contender as a body to step up to as a first APS-C mirrorless, or as an upgrade if you’re working with a years-old camera now.

Since you’re here reading this, let’s assume that your main interest is in toy photography, or at least studio-based of some sort. The 6100 feels pretty ideal for that role. Shooting from a tripod means the lack of sensor stabilization doesn’t matter, just like the lower maximum ISO is irrelevant. The video features are the most restricted comparatively, but in the context of something that will be a secondary use for the camera, it’s still going to offer pretty nice video even with just the “base model” features. While I do advocate for buying good condition used equipment when possible to save money, it’s worth considering how competitive the pricing is on the A6100 in a new-versus-new situation.

The A6000 still has an SRP of $550 (might we hope for that to drop with the successor in the picture now…?) for body only. That’s a body that’s several years old now, and while it’s still a nice camera despite its age, for an extra $200 it’s possible to not just get a body with a newer and probably somewhat better sensor, but a range of internal improvements across the board to further help make better pictures. Would I still buy a cheap used A6000? Totally. I’m poor and love a bargain. But do I want an A6100 instead? Absolutely. If the money was available to me right now to commit to a new camera purchase, the 6100 would simply be too good of a package to not go with.

All the cameras in this range feature 24MP sensors. Canon also this week announced some new cameras that have APS-C sensors at 32 megapixels. By the numbers it seems to make Sony look to be lagging behind a little. But let’s remember that more megapixels isn’t automatically better, and the more photo-receptors you have to cram on a fixed-size surface, the smaller they have to get, and that’ll start to have consequences on the image quality. My opinion is that 20-24MP is a good place to stick with APS-C, and going higher should probably stay the domain of full frame sensors. Plus, with the reworked colors on the latest Sony cameras and the excellent-performing autofocus system, there’s less and less that Canon seems to be able to offer.

The prices I’ve been talking are for the camera body without a lens. If you don’t already have some E-mount lenses on hand, you will have to expect to spend a bit more. The A6100 looks like it’ll be available as a kit with the same little 16-50mm lens that’s been around for the whole of the 6000-range – and the A5000 and 5100, too – which will add just $100 to the price. That leaves the cost still $50 less than just the cost of the A6400 body and no lens, which is pretty impressive. The A6600, meanwhile, seems like it might only be offered in a kit with an 18-135mm lens. That package is $400 more than the body alone.

It’s a pretty big jump from the A6400 to the 6600, moreso than the difference between 6100 and 6400, but it’s not hard to understand. All three cameras leave you well covered for photography, and if that’s all you care about, you can almost certainly stop at the A6100 and be doing really well. The A6400 adds in picture profiles and eye-autofocus for video, and ups the viewfinder resolution, for an extra $150. And if those are things you know you’re going to need or will miss in the A6100, it’s a very reasonable extra cost to get access to them. The A6600 has all of those things, and gives you sensor stabilization, and a bigger, longer lasting battery, which kicks the price up another $500 past the 6400. Nice to have if you need it, though at that price I think you’re knocking on the door of yet-better options.

But what this comes down to is that the lineup introduced this year has a really good structure. A very solid starting point in the A6100, and the ability to buy upward to increasingly sophisticated features if you know you’re going to need them. At this point, there’s little or no accounts of in-hand experience with these new cameras, so we’ll still have to wait and see if any surprises appear in actual practice. But the A6100 sounds super promising, and I’m very optimistic that I’ll be able to give it a full recommendation to anyone wanting to update or just enter the world of larger sensor cameras.