I’m back in action and coming to you with a gallery for a brand new Transformers Siege release! I’ve got well over 100 photos of Voyager class Apeface out of a fresh new camera. Keep reading for a highlight reel, a link to the full gallery, and an affiliated purchase link so you can buy one for yourself and help out the site! 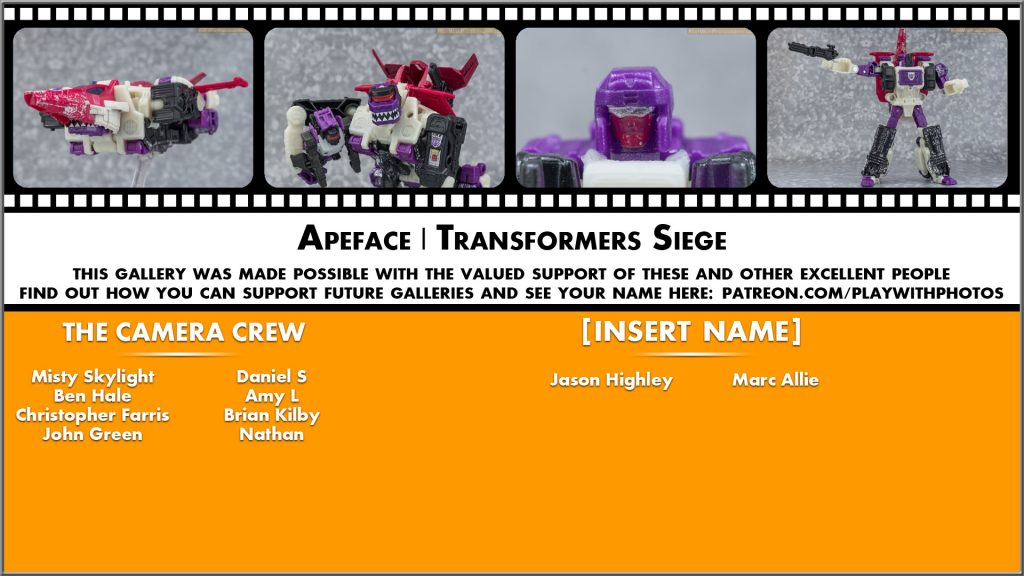 Supporters on Patreon make content like this possible! If you’d like to join, get your name on a credit page, and help me make more galleries and other assorted nonsense, click here or on the image above to head to Patreon and sign up!

Apeface is the last new Voyager mold for Transformers Siege. It also the first “real” update of Apeface, like, ever. The Titan Master Apeface in Titans Return was amusing, but I doubt anyone seriously considered it as an actual updating of the character. But thanks to 5mm standards and system-wide weapon modes, Siege Apeface can very nicely interact with its immediate predecessor! Not to mention getting an alternate robot head option! 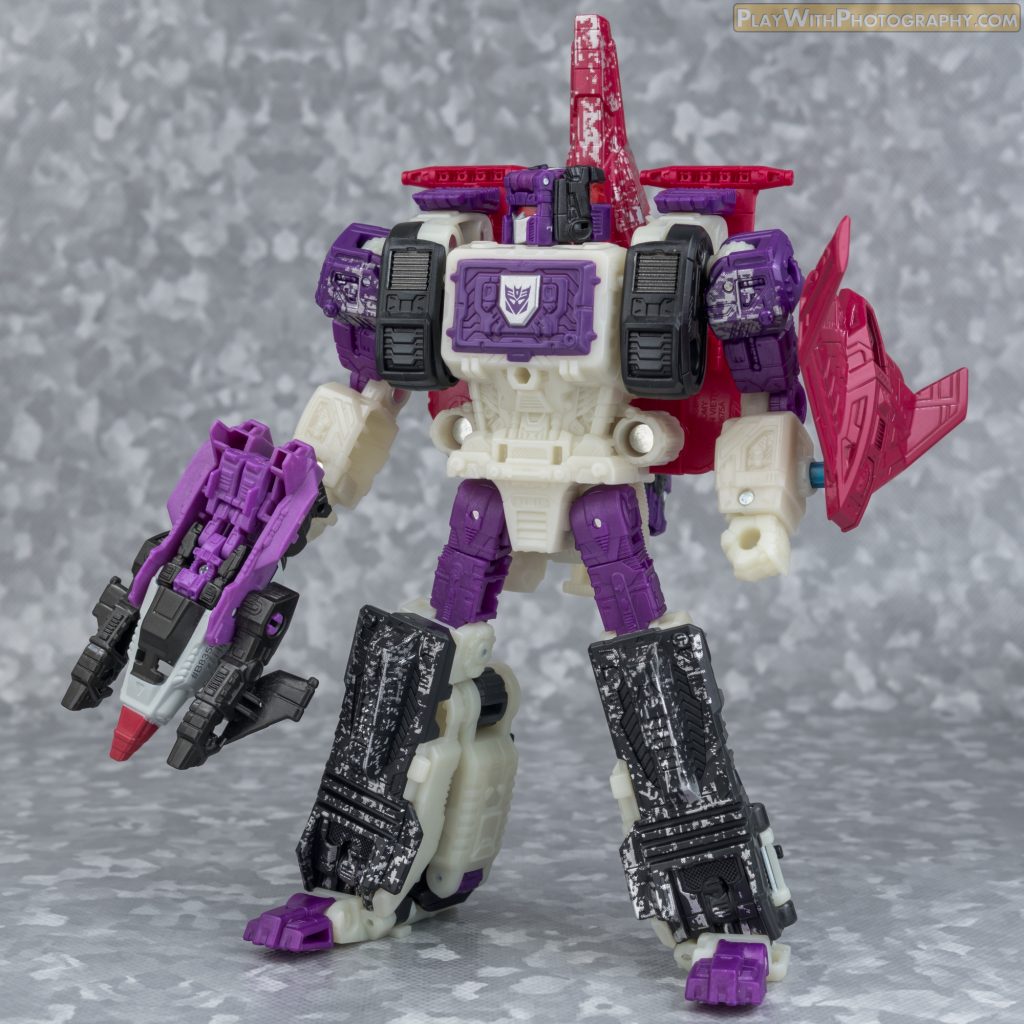 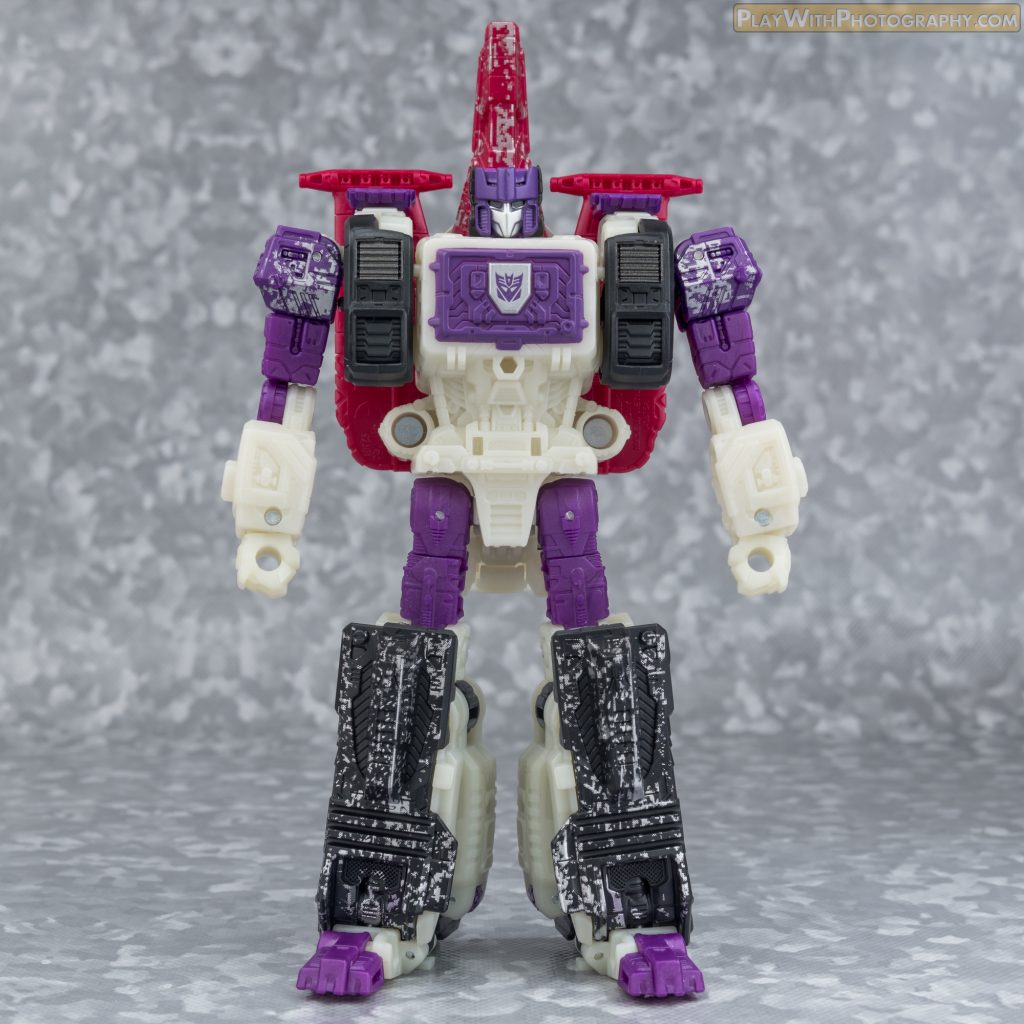 While fully functioning as a triple changer, it’s clear that the jet mode was the sacrifice for the sake of the other two; it’s barely removed in form from the ape, requires a large extra piece to cover up some gaps and finish filling out the silhouette of the aircraft, and at least in my opinion looks clunky and inelegant. The G1 toy may not have been prize-winning either, but it seemed to succeed more in this area. Still, it’s not to say that the jet mode can’t look cool… 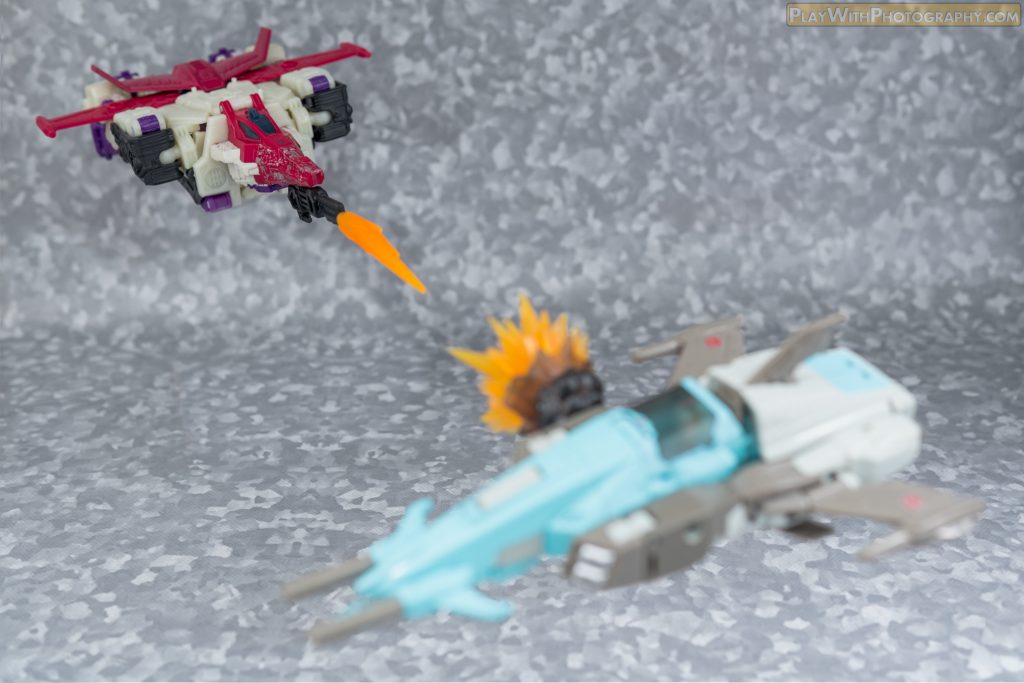 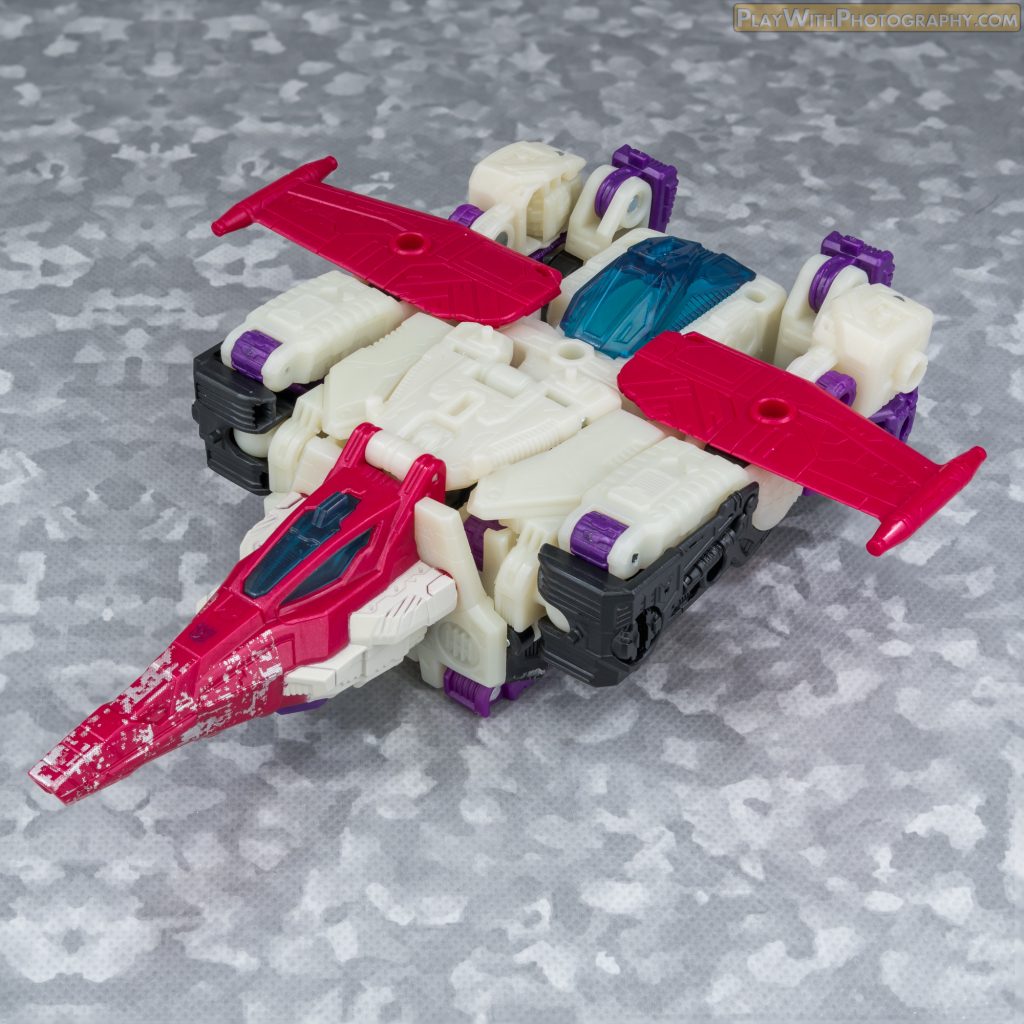 The thing that most gets me in how the jet mode was executed though is the Headmaster/Titan Master cockpit. In isolation, it works just fine, even if the little dude is driving from the back of the plane. But that big extra piece I said you had to attach to “finish” the jet? It completely covers the cockpit canopy, blocking it from view and preventing it from opening. The whole add on piece has to be removed to get access. It’s some not-that-great design, honestly. 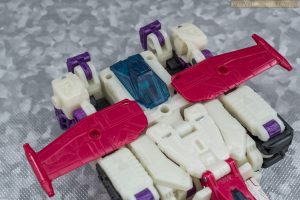 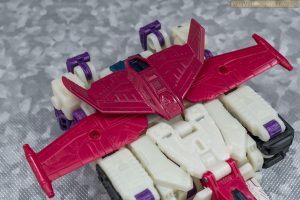 The ape mode, arguably the main thing people would care about for a toy of this character, is fine. Transforming from robot mode to ape mode – or jet mode, actually – is something of an ordeal which I don’t enjoy, and that gives the impression that the toy is not all that stable. But once all the panels and things finally do snap together properly, the ape mode is fairly sturdy. It’s not very poseable, sadly. The arms have a limited number of joints, and the articulation of the legs has very little practical usefulness.

Even with the limitations that exist, I found I was able to do some fun, and even impressive looking things with Apeface’s ape mode. But don’t expect very convincing poo-flinging or butt-scratching from this one. 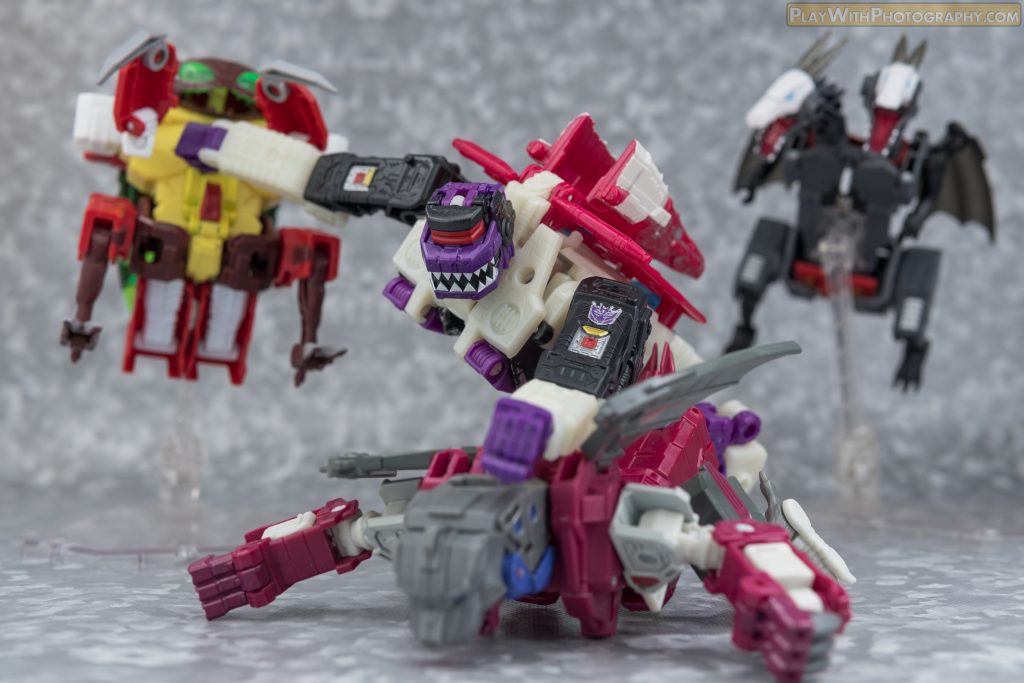 The head is on a ball joint neck, giving it some degree of mobility. Enough to pitch up and down a bit, and to get a small degree of side to side motion. It’s honestly more than I expected. The Titan Master makes the top third or so of the ape head, so all the rest of the time most of it is going to be hanging around somewhere. It is at least largely hidden in the jet mode. 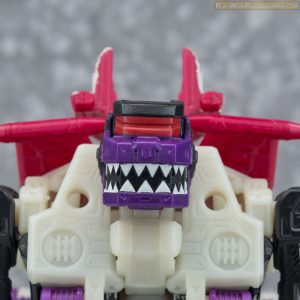 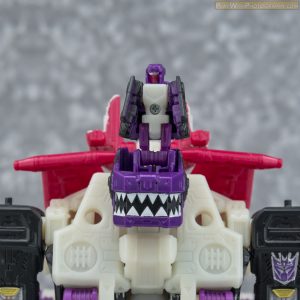 Robot mode is the strongest showing, though even then I’d mostly just say that it’s fine, but not particularly special. One huge hit against it is the use of the milky, off-white plastic that makes details hard to see under normal conditions and just generally doesn’t look very good. And then of course Apeface has a ton of battle damage tampos. For the robot mode it’s almost entirely focused on the shins, but the shoulders have a little too. 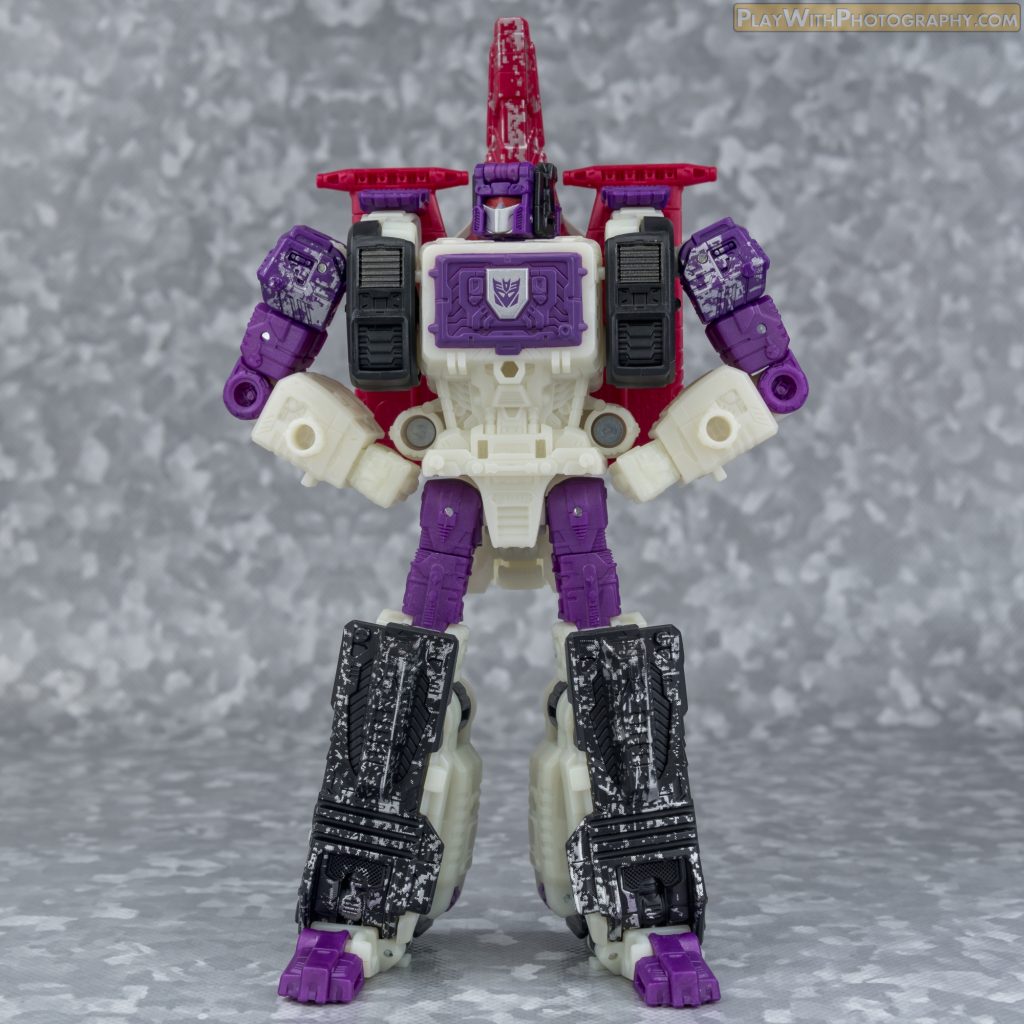 The robot is also a touch on the small side. Clearly that must be a tradeoff for some of the complexity needed for being a triple changer, and as the toy feels reasonably substantial in hand, there’s definitely not an absence of material.

The jet mode filler piece is meant to be used as a shield, and Apeface also has a small rifle which I like quite a bit. The shield is awkward in use and kind of proves that it’s more of an improvised function rather than a clear design intent. I usually just attach the shield to one of the ports on the backpack and ignore it. 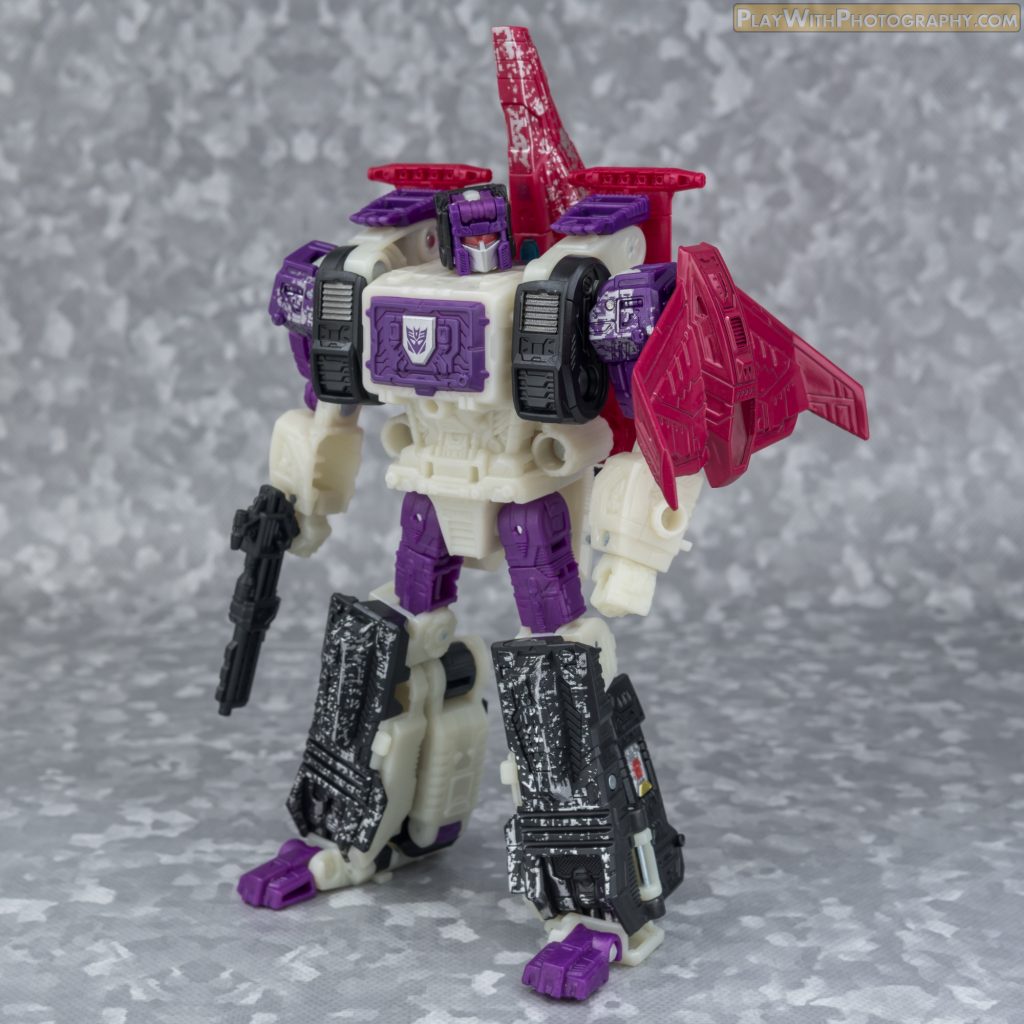 Overall, Apeface is not the line’s strongest showing. In a series of largely very good figures, something that’s not quite firing on all cylinders is going to stand out and look that much worse simply for not exceling. Apeface maybe could have used another trip around the engineering department to tighten up and refine some points of the design, but it’s not a disaster or anything. I do hope the Snapdragon that I feel we’re all-but-assured of getting in the near future fares a little bit better, but Apeface is probably still worth getting.

Especially if you can find it on special for a few dollars under SRP! Amazon currently has Apeface available for preorder in advance of the scheduled shipping date of 11/15. You can find Apeface at the affiliate link below:


Click here to go to the full Siege Apeface gallery!