While a status as “the last toy in Siege” is questionable, Spinister is definitely the last new Deluxe in the line. Whichever way you might want to categorize it, the result is the same: Siege is going out on a tremendous high note. 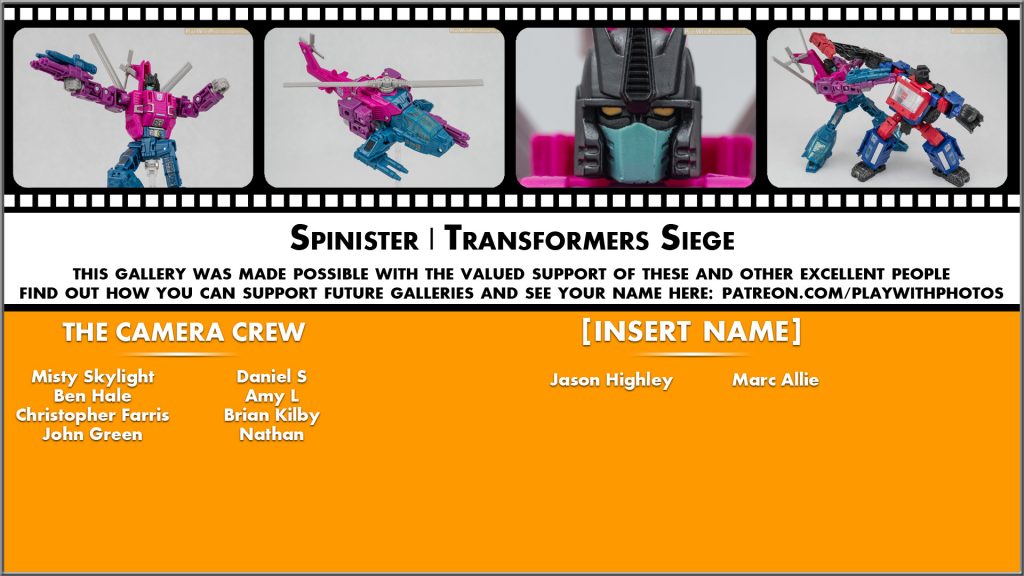 Supporters on Patreon make content like this possible! If you’d like to join, get your name on a credit page, and help me make more galleries and other assorted nonsense, click here or on the image above to head to Patreon and sign up!

A brief history of Spinister in Transformers Generations: In 2012, a Spinister was offered as an add-on exclusive at Botcon, redecoed from Tomahawk, a technically movie-toy from the second year of Revenge of The Fallen product. It’s a nice toy, but it didn’t make the best Spinister, in part due to the colors having to be inverted in robot mode for the sake of the helicopter. A couple years later, a Spinister came out to regular retail! …as a tiny accessory figure to a Legends Nemesis Prime. And it was just a redeco of someone else’s partner accessory anyway. And then a couple of years after that, another exclusive Spinister was produced for a Transformers subscription service set. This time it was made from Alpha Bravo, but to its credit, it did have its double-Targetmasters. However, unless you ordered it right away, you’d end up out of luck for this one; as part of a full combiner set, it doesn’t come up for sale very often, and when it does the price is typically ridiculous.

Siege Spinister solves pretty much all of those problems. New mold designed for the character, not an exclusive, not 2 inches tall. The worst thing you might be able to say about this Spinister is that it’s a tail-end toy, but the landscape of online retail these days often makes that a non-issue as well. Plus, this Spinister is just utterly fantastic! 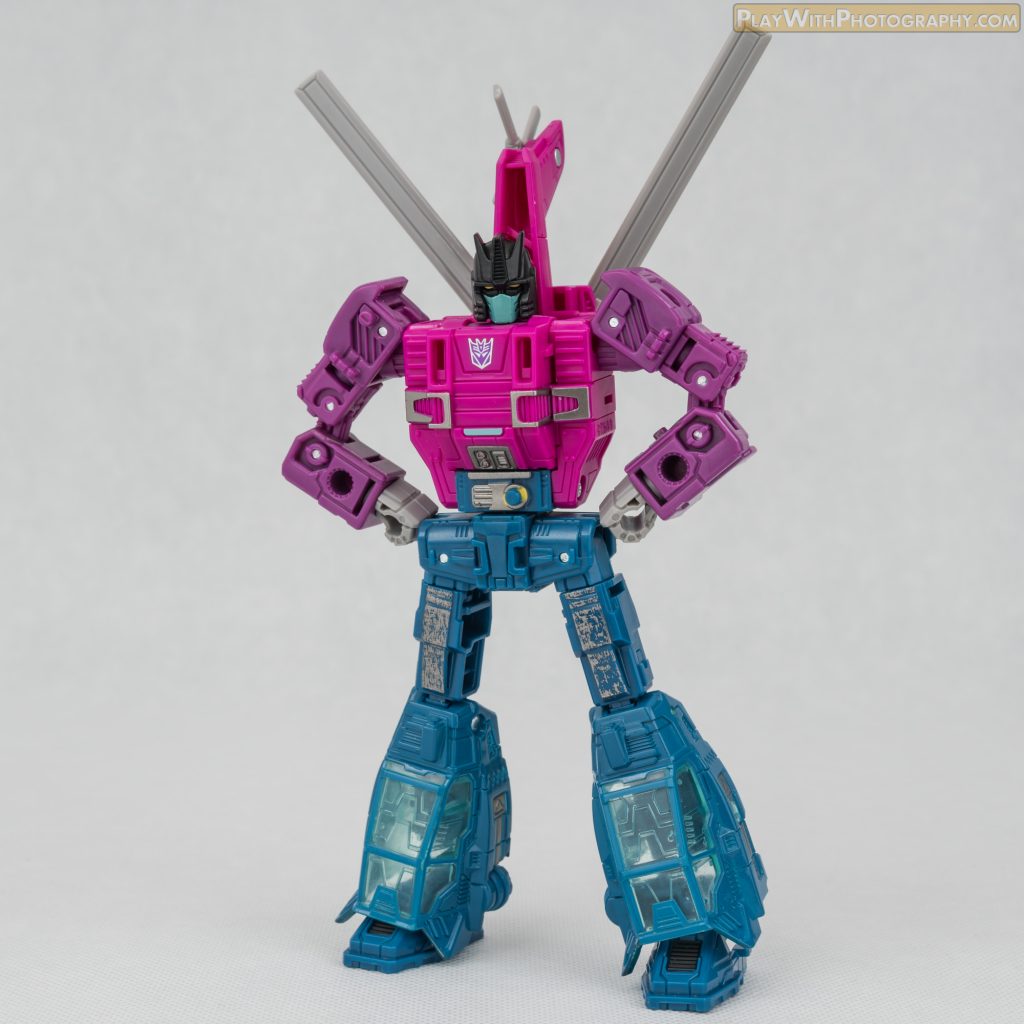 Order Transformers Siege Spinister on Amazon, and help out the site!

In robot mode Spinister feels large in the hand, and is pretty solid – there’s very little in the way of hollow spaces here. The thighs are the main offender, with inward-facing empty spaces. But honestly I didn’t really notice them until I specifically started looking for them like 30 seconds ago. There’s a little bit of it in the forearms, kind of. They fill it in and disguise it well, though. 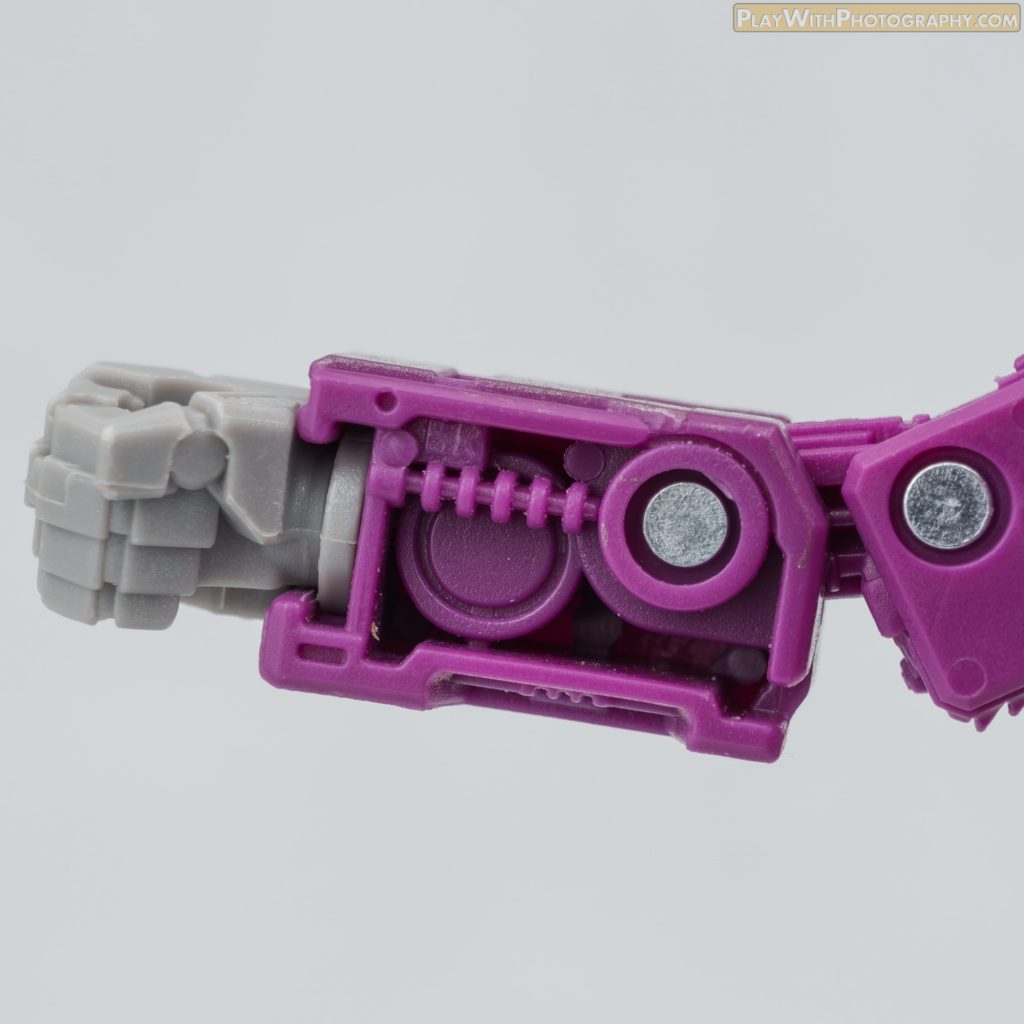 One of Spinister’s defining details is that V of rotor blades sticking up from the back, and I love the way they made that happen. There’s an extra little fin on the tail mast that pokes through a hole on the outer back plate. What this does is catch in a shallow notch on the base of the rotor. When the blades are collapsed to form that V, the notch meets the tail fin and the blades are held securely upright. It’s a great solution that does not in any way harm the blades’ ability to freely spin in alt mode. 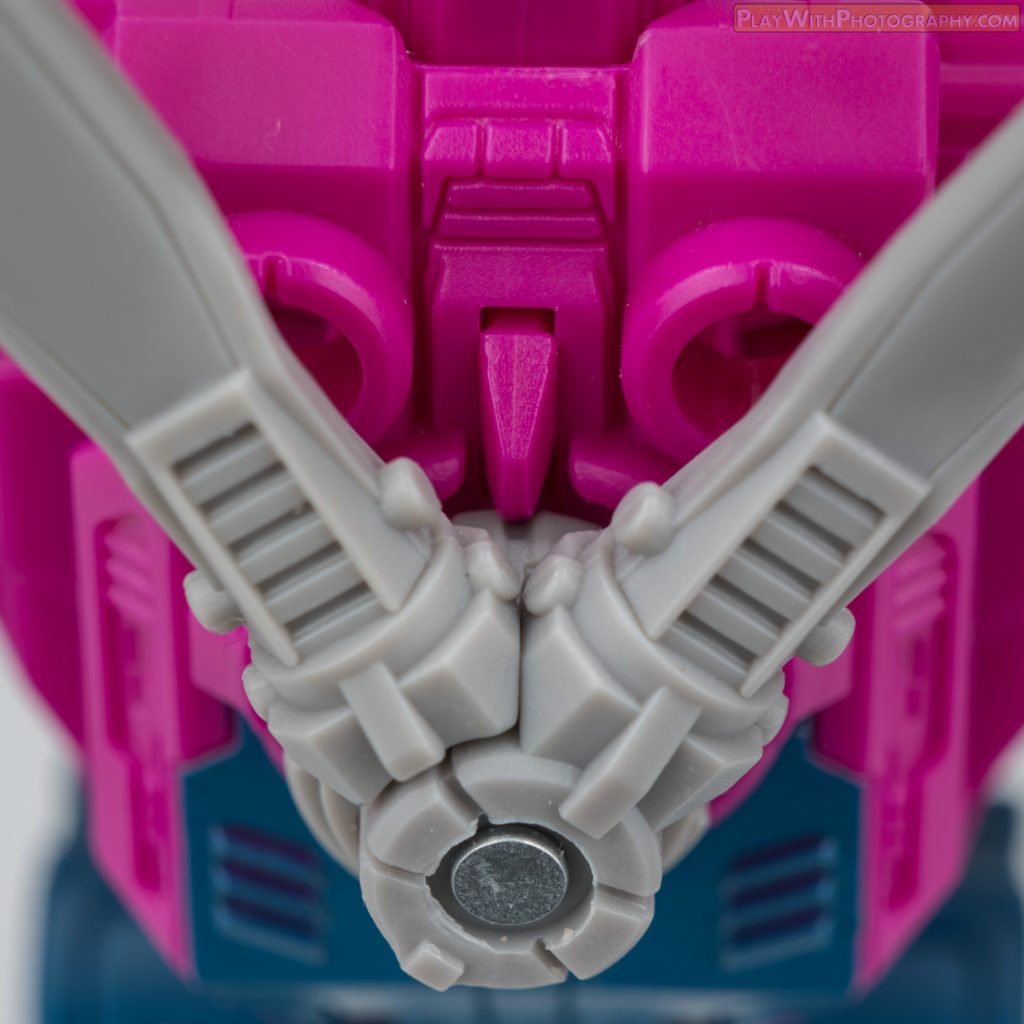 Poseability is good. Transformation requires a double hinge elbow, so we get a bit of a bonus there versus the “standard model”. The knees are only single hinges, but they have an extended range also thanks to how the transformation works. Spinister is blessed with wrist swivels just because, and the ankles are functionally multi-jointed. On my copy the ankle joints are pretty tight, so making use of them takes some effort, but they have a lot of potential. It’s worth it though, since on a copy with joints this tight, Spinister has no trouble standing unaided on one leg, even in somewhat extreme poses! 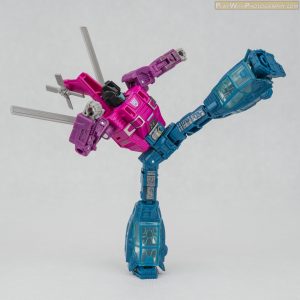 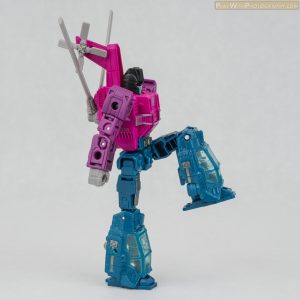 The deco is I’d say average in quality with some sloppy edges in a couple places. But there’s a good amount of color variation, and we have to keep in mind the two clear plastic canopies take up a lot of paint each. Spinister has quite a quantity of paint work, and it’s used very effectively. Plus of course we have those wonderful late G1 colors. It’s quite brilliant. 😀 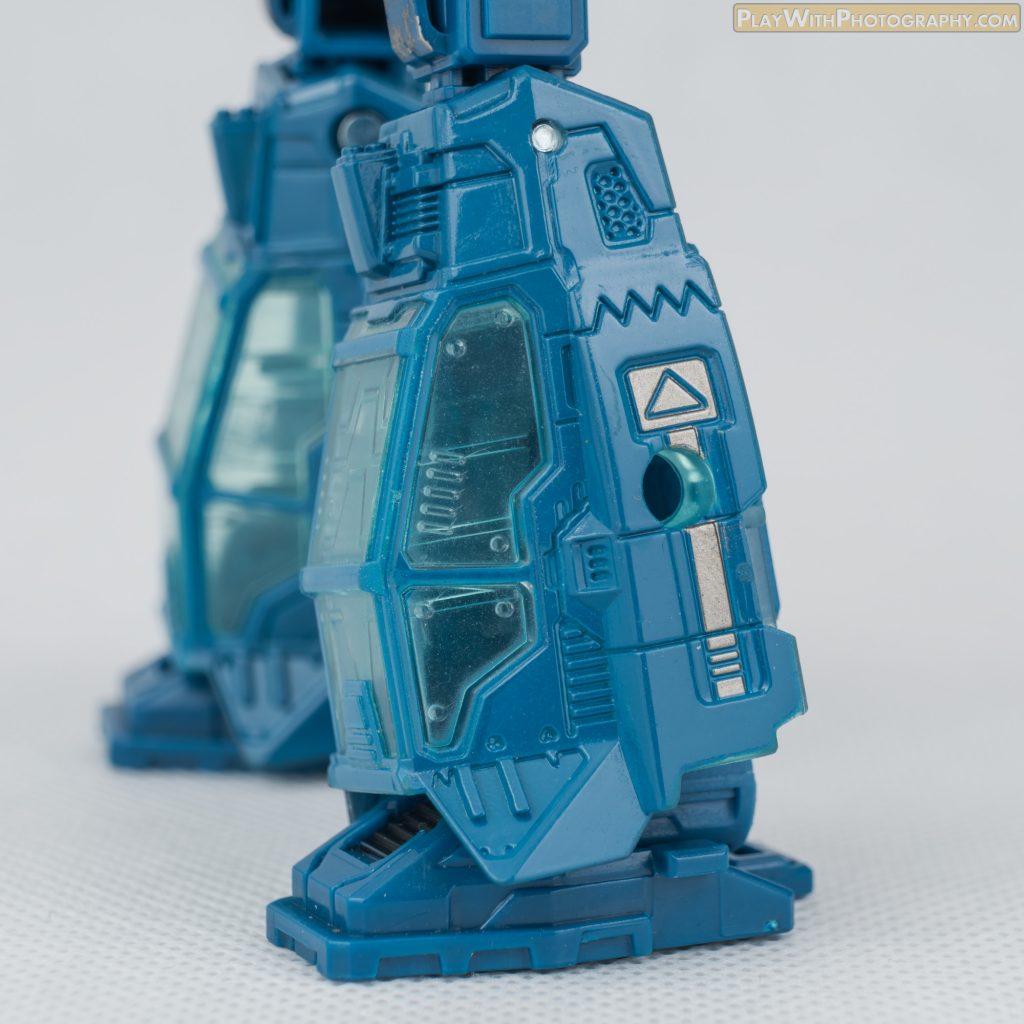 You know what else is brilliant? The way this transforms. I rarely indulge in the concept of “toy spoilers” but the engineering here is a sort of magic experience that especially folks who appreciate the engineering of Transformers will probably want to have first hand. The process of going from torso to two-thirds of a helicopter felt pretty unique, and I don’t think I’m alone in the opinion that there hasn’t been a lot of unique in Siege’s transformation engineering up to now. Even the way the legs actually work in practice is really interesting, even if much less complex than the body. Just go in understanding that order of operations with the legs is very very important. Also, as far as I can tell even though the cockpits are virtually identical, it’s not possible to accidentally – or intentionally – arrange them backwards; only the one without the landing gear is able to fit under the helicopter. 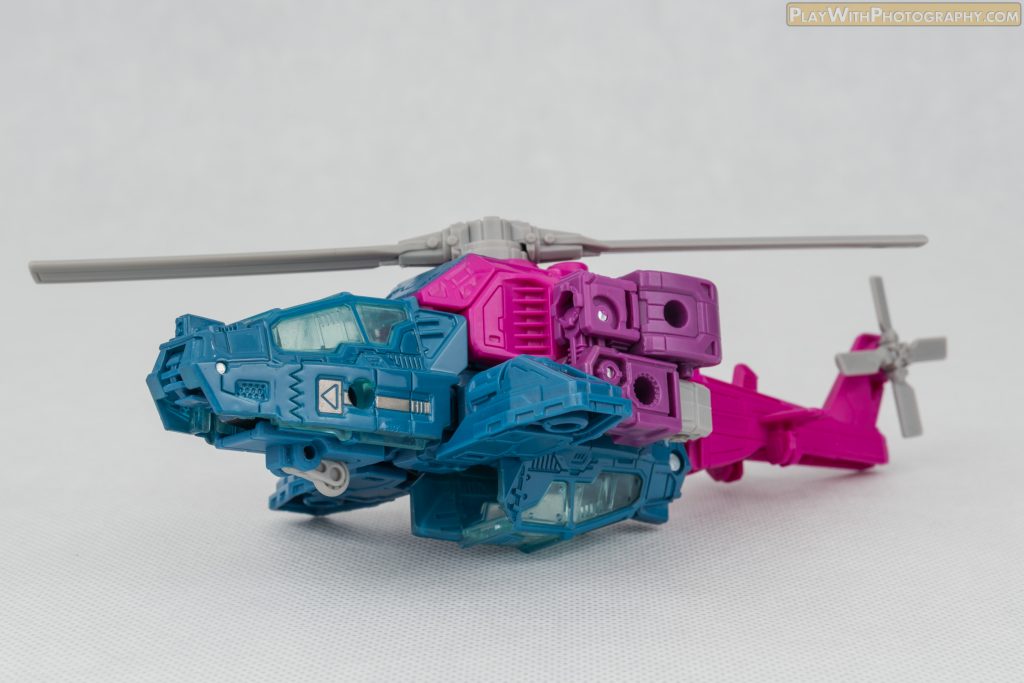 The helicopter is where the compromise happens for this toy. But that’s solely on the basis of the underslung second cockpit. That’s the only significant problem I have here. The helicopter is solid, just the right kind of chunky, and still feels good-sized when you handle it. If that second cockpit could have been actually hidden away, it’d be virtually perfect. On, say, a nitpicky level, I could say that I wish there were more 5mm ports distributed in other places. Like, the actual cockpit has one port along one side, but not on the other side. That port is meant for the robot mode, as the false cockpit has a matching port on just one side. But there’s also not a port to allow placement of a chin gun, for instance. It’s not to say there aren’t a healthy amount of options present, but I’m feeling the absence of a couple specific ones. 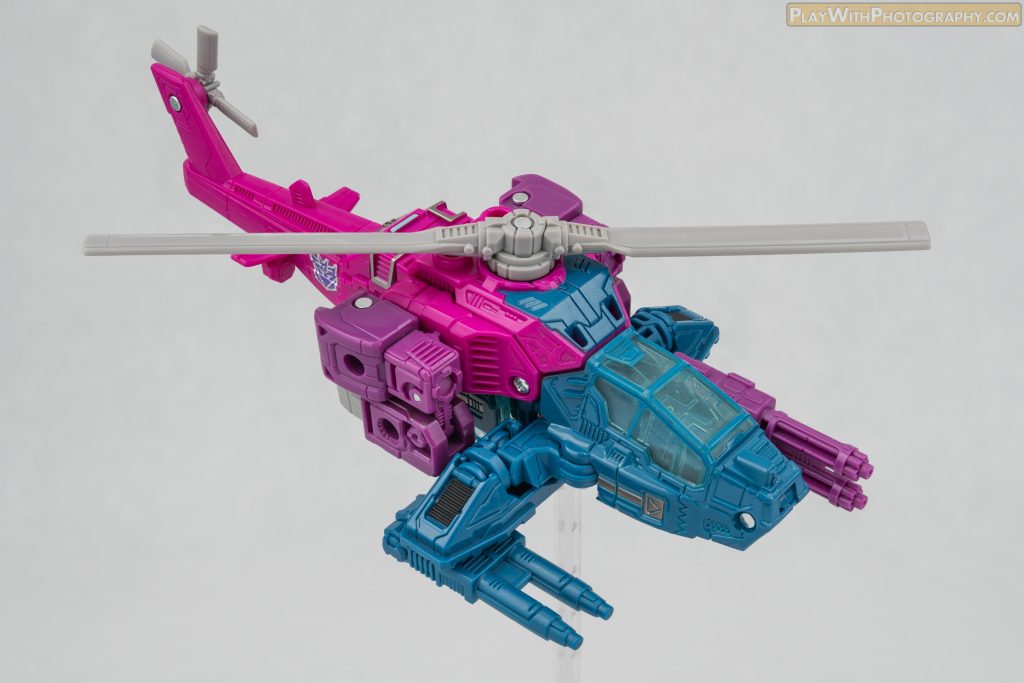 The guns are also a let down in one specific kind of context. I like that they’re made to stack on each other to emulate a double-Targetmaster, and they at least resemble Spinister’s TMs’ gun designs. But especially since we did end up with both of Spinister’s little buddies as Battlemasters (even if one is an exclusive) I so deeply wish that these guns would have gotten an easter egg feature where they could replace the back guns on those two Battlemasters so that the end user could make (mostly) proper Targetmasters if they had all of the different toys. But again, that’s a pretty specific, probably very me-only kind of complaint, so don’t let it color things too much for you. 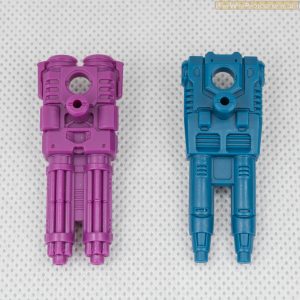 I am so, so happy with this toy. Especially after the mild letdown Apeface was, Spinister just presents as fantastic from beginning to end. It’s a hell of a way to see Siege off, and I hope that our designers didn’t have a chance to lose momentum between doing this and the first wave of Earthrise. It absolutely made my day.

Click here to check out the Siege Spinister gallery! 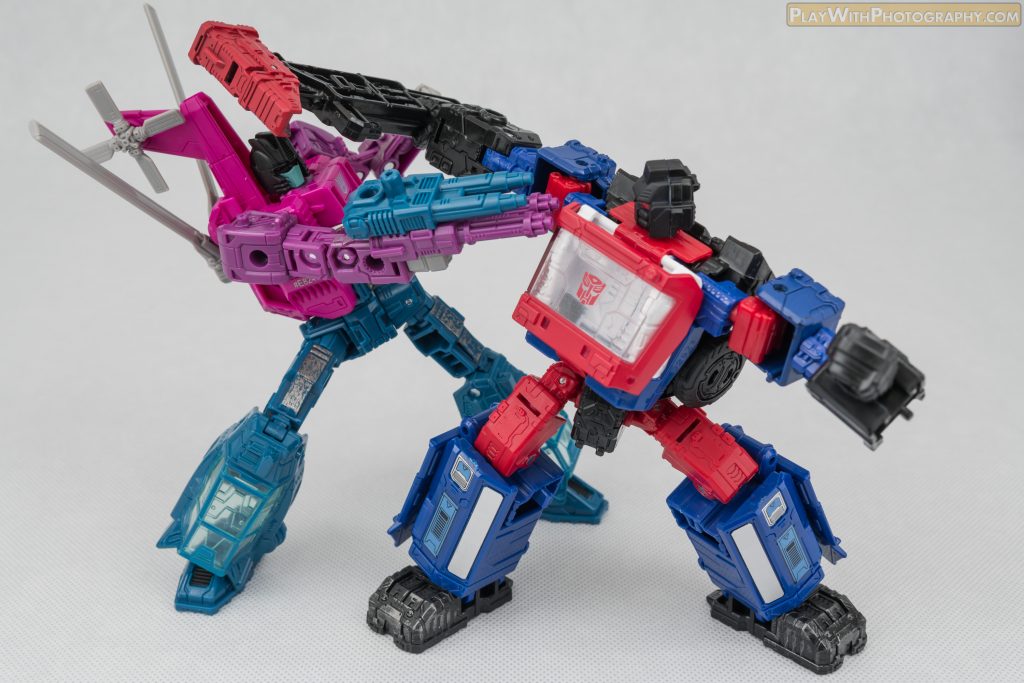