I had high hopes for Earthrise Smokescreen – and by extension the whole new family of not-Datsuns. Some might say they were impossibly high hopes, given how nice the stock images made it look. Not to mention when just a short time before getting Smokescreen I saw a side by side of Siege Bluestreak next to its Earthrise counterpart, that only provoked me more to pin all my hopes on this mold.

I’m truthfully amazed that I didn’t end up disappointed in some way. It’s not a secret to anyone who’s listened to me talk about Siege stuff to any great degree that I was never all that pleased with the Siege versions of Prowl and company. Despite buying them all because, naturally, that seemed like it’d be the best we’d get in the near future. And those toys were in their own way preferable to me over the old Universe toys. And… well, let’s just not address Combiner Wars Smokescreen at all, shall we? It hasn’t been the greatest history with these characters in the Generations lines, from my perspective.

There’s way too many photos of Smokescreen to include them all in this post. The full gallery with over 100 photos is linked at the bottom of this article! 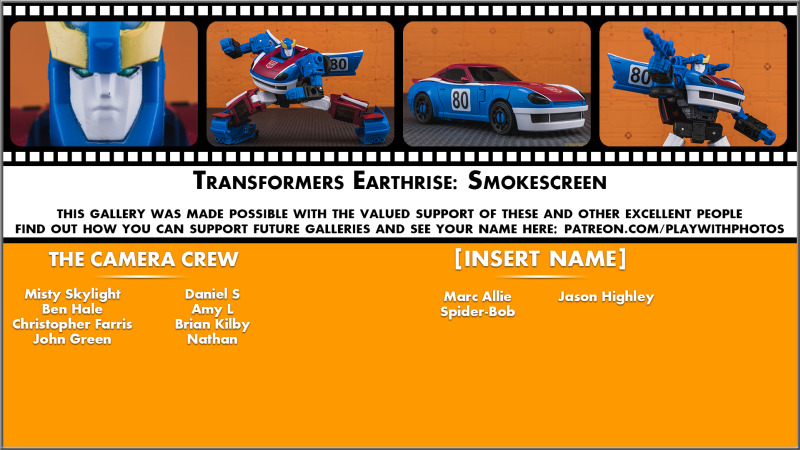 I should explain some about what Smokescreen is. One of the Hasbro designers described Earthrise Prowl as a “partial” of the Siege toy. What I’m learning is that this phrase can apparently mean anything from “reuses parts” to just “copies some of the engineering”. Smokescreen proves to be the latter. Much of how the parts move between modes is very similar to how the Siege mold works. But there are divergences, and even where the parts work the same way, they’re usually constructed differently. And never let anyone say that this is a “remold” of the Siege toy. There is not a single shared part that I can find between the two toys. It is an all new build using an existing transformation pattern as a template.

This approach gave what I would unfairly describe as a chance to do the Datsun family over and get it right. But that’s unfair, since I would say that the Siege toys did exactly what they set out to do, whether or not I’m personally much of a fan of that execution. And to be honest a lot of my issue with that mold is some of the copies I have not getting the best parts fit or joint tolerances; Siege Bluestreak actually has really good fittings and is my favorite of that quartet. But I still like Earthrise Smokescreen more. The fact I shot over 100 photos of it is by itself probably a pretty strong indicator to that end.

The car hood clicks in place in the abdomen similarly to how it works on a Siege equivalent, though it takes a little more finesse to get it to lock correctly. However, that’s not too much of a problem, because they added flanges along the sides of the torso that fit slots inside the shoulder joints to give an extra layer of stability. Where was this thinking when we got Reveal The Shield Jazz?

The lower legs and feet work in almost an identical way to last year’s toys – including the clear plastic knee, I’m afraid. But the feet are designed with much better stability. Siege’s collapsing heel is replaced with a small heel block that both firmly sets in place, and also does not move front-to-back. It flips up to the side for transformation, and take a mild effort to do so, basically ensuring foot stability. I can easily get Smokescreen stood on one leg with no outside support.

Beyond the functional, the visual is also much better. The limbs are all thicker and more substantial. That to me was especially important in the thighs which looked very thin on the Siege mold. The head sculpt for Smokescreen in particular is a better likeness for the cartoon on Earthrise too. 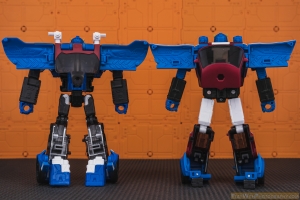 One thing I think Siege did do better was the design of the shoulder cannons. They looked more like the media interpretation, and even had that combining handgun option. The Earthrise shoulder cannons are taken from Bluestreak’s cartoon shoulder cannons. That’s not objectively a bad thing; they have a compact design that doesn;t get in the way, and they fit tight against the body of the robot and car. The mechanical execution is pretty much fine. They just aren’t Smokescreen’s shoulder guns. They’re also permanently angled up just a bit which might not be to everyone’s tastes.

You can attach the Siege cannons if you want. The tabs are the same width and length, so they’re functionally interchangable. The only difference is the depth, so the Siege cannons will “hover” a bit above the line of the hood. You could probably trim the tabs a little to get them to fit “right” on Earthrise Smokescreen, and actually not lose compatibility with the Siege toy, though I haven’t tried that. 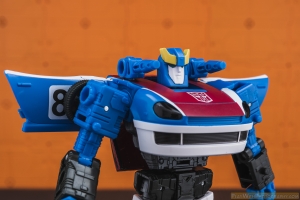 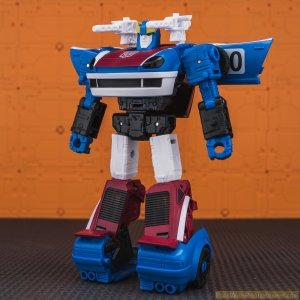 Apparently the rifle is at risk of breaking. I’ve been told of at least one case, and seen a photo of another. In that latter case, the snap seemed to occur when taking the rifle out of the packaging. So, be careful? Honestly, between that and the wrong cannons, I’d certainly consider a Nonnef kit that replaces these accessories. Very good chance of an add-on pack such as that bringing this Smokescreen that much closer to being an ideal representation.

The poseability of this robot mode is outstanding. Tremendous range on the legs thanks to transformation engineering, which gives you a lot of flexibility to work with. The arms have more of a standard range, and that is impeded just a bit by the hood-chest. That mainly hinders across-the-body arm poses, though. While the transformation hinges at the shoulders aren’t meant to be used for posing, they still can be. If you pull them out, they won’t be contributing to holding the chest down anymore, but that doesn’t hurt the stability nearly as much as it might sound like, in my experience. The big takeaway here is that Smokescreen is legitimately fun to pose, even with the small interferences. 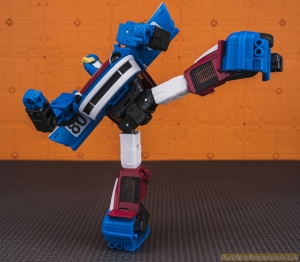 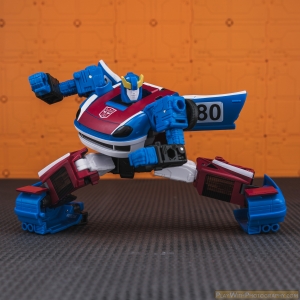 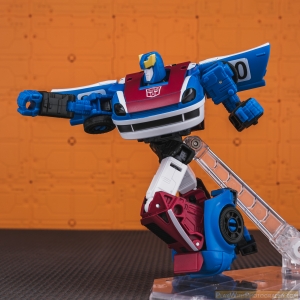 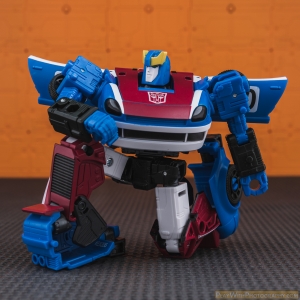 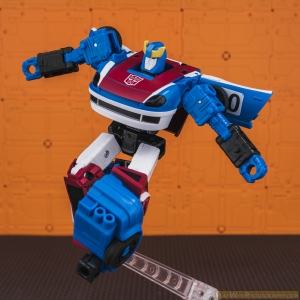 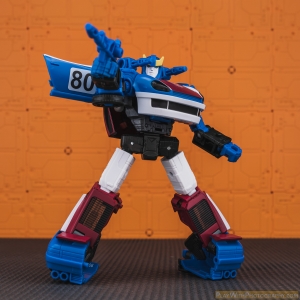 The car mode is really nice. It favors the 280ZX, naturally, but it also doesn’t look outdated, or “vintage” if you’re being kind. The lines are smooth, the design is clean, and it looks compact and sporty. It’s a great realization of the idea of what Smokescreen and the gang turned in to and I find it very pleasing to look at. It’s also all kinds of photogenic. I have found that it can be a struggle to get every panel gap closed, and it takes some massaging to get the car mode to come together exactly straight. Often I find that the wheels aren’t all quite level. I do wish that it was able to square up correctly on its own naturally as the car comes together, but at least it’s addressable by just making small adjustments until it gets where it needs to go. 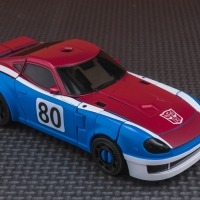 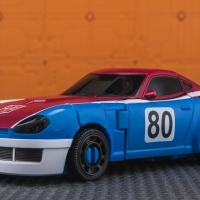 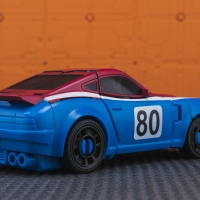 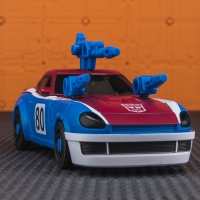 Oh! And most important of all: Smokescreen fits in Prime’s trailer! albeit just barely. 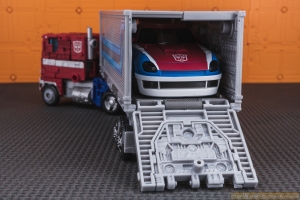 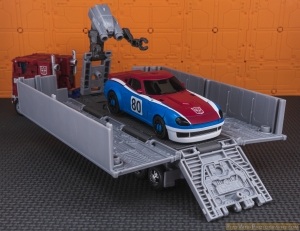 This toy is completely fantastic, and I’m thrilled that something this good is also a mold known to get multiple uses. I’m hoping so much for appearances beyond the standard three. A Selects Blue Bluestreak would be a dream, but I’d also take an Earth-mode pass at Barricade, and probably just about anything else Hasbro or Takara might want to do with this mold. Did you know there was a factory paint package for the 280Z that would be pretty much perfect for a movie-inspired Bumblebee? I’d even go for that, just tool up a new toy-based Bumblebee head to stick on it and we’re off to the races!

CLICK HERE TO GO TO THE FULL EARTHRISE SMOKESCREEN GALLERY!

This gallery was available exclusively to my patrons at the $2 level and up before it was posted here. If you’d like to get early access as well as show your support and help me out to keep making content like this, please consider becoming a patron today!

With that, the first (abbreviated) week of Photober comes to a close. A new week is about to begin, so come back tomorrow to see what’s in store on Photober the 5th!