Playmates Star Trek week concludes, right on Q! This week started with a cheap uniform variant to fill out a product assortment, and it comes back around to end on the same note. Though at least this one was something that appeared on screen. Q was first available in a TNG-style uniform in I think the second assortment of Playmates figures, and came with some unique accessories like a tiny (all purple) Enterprise, a generic sceptre, a reuse of one of the crystal clusters the toys called dilithium, except that they were based visually on something else from an episode of the show. And there was I think one more accessory that I can’t recall, annoyingly. Oh, right. He had a miniature (also all purple) Earth. Turns out that goofy inclusion really was worth looking up the answer for. I’m pretty sure TNG Q also featured a selection of new body parts besides just the head, at a minimum having a first-run torso. But this is about Deep Space Nine Q, which is none of those things. 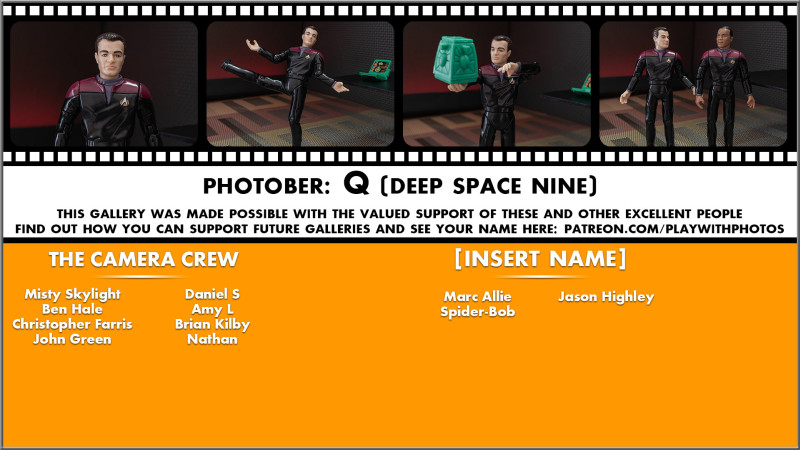 DS9 Q’s construction is a complete reuse of the first season Sisko figure, with the TNG Q’s head swapped in. As you can see from the packaged photo, I bought this one locally at a second hand store… probably a year ago? I don’t recall exactly. The last time I would have gone to McKay’s was in January of this year, so it definitely wasn’t after that. I bought Sisko off of ebay much more recently, and had not known until I opened both figures that they were functionally the same figure. Oops. That would honestly have changed my plans and yesterday probably would have been a Janeway instead of Sisko. But I figure this information has value too. 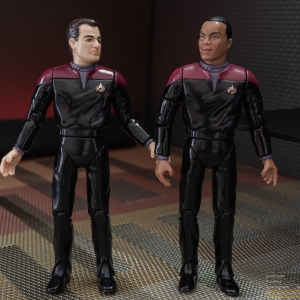 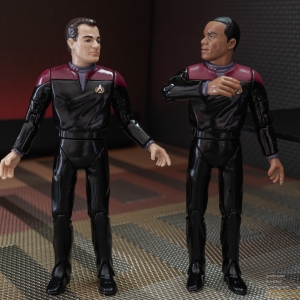 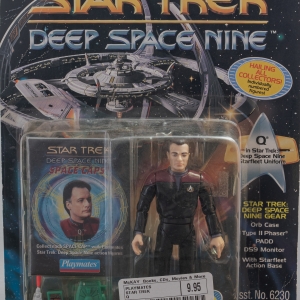 The Q face sculpt never looked very much like de Lancie, which is a shame, but I can see how capturing that level of smug confidence and self-amusement would have been challenging. 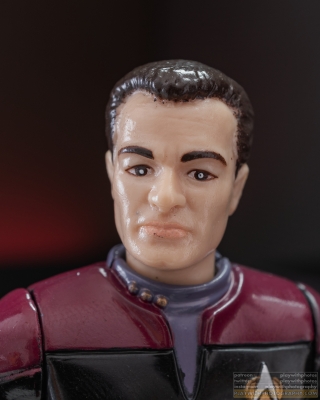 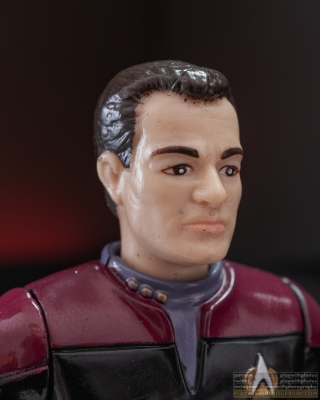 Going beyond the reuse of Sisko’s body, this Q also reuses all of Sisko’s accessories, in a different plastic color. That does make me think that the accessories might be in some way at least partly tied to the figure they come with, where for some amount of time I had thought it possible there was files of accessory molds that could be mixed and matched with different figures as desired. Or maybe they figured out that an Earth, Enterprise, and sceptre were not great accessory ideas anyway and would make even less sense in a DS9 context? 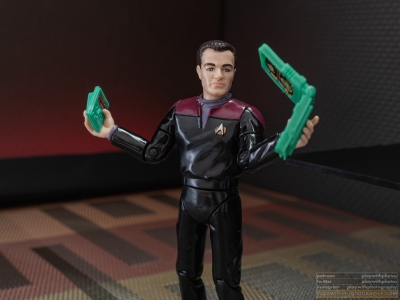 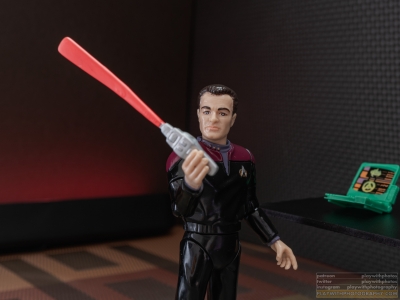 But it’s not like these reruns really fit either: PADDs and monitors are pointless, and what does Q need with a phaser, anyway? The Orb ark might have amusing connotations given Q’s ongoing efforts to antagonize every different kind of lifeform he meets. Q vs Prophet would probably be an interesting match. Or maybe Q would just turn all the Orbs to baseballs to mess with Sisko. 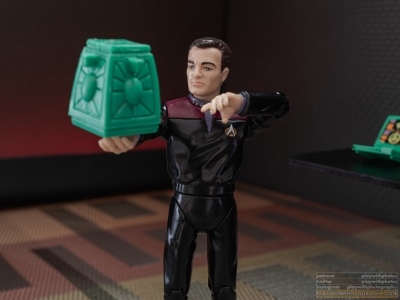 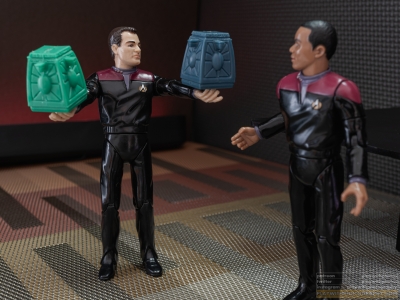 Although Q only had one visit to Deep Space Nine presumably because he couldn’t get the right kind of rise out of anyone but Sisko, and Sisko just punched him in the face, Voyager was a different story. With Voyager never transitioning out of the DS9-style uniforms, this Q might find a better home with a set of Playmates Voyager figures than it does with the DS9 collection it was packaged as part of. 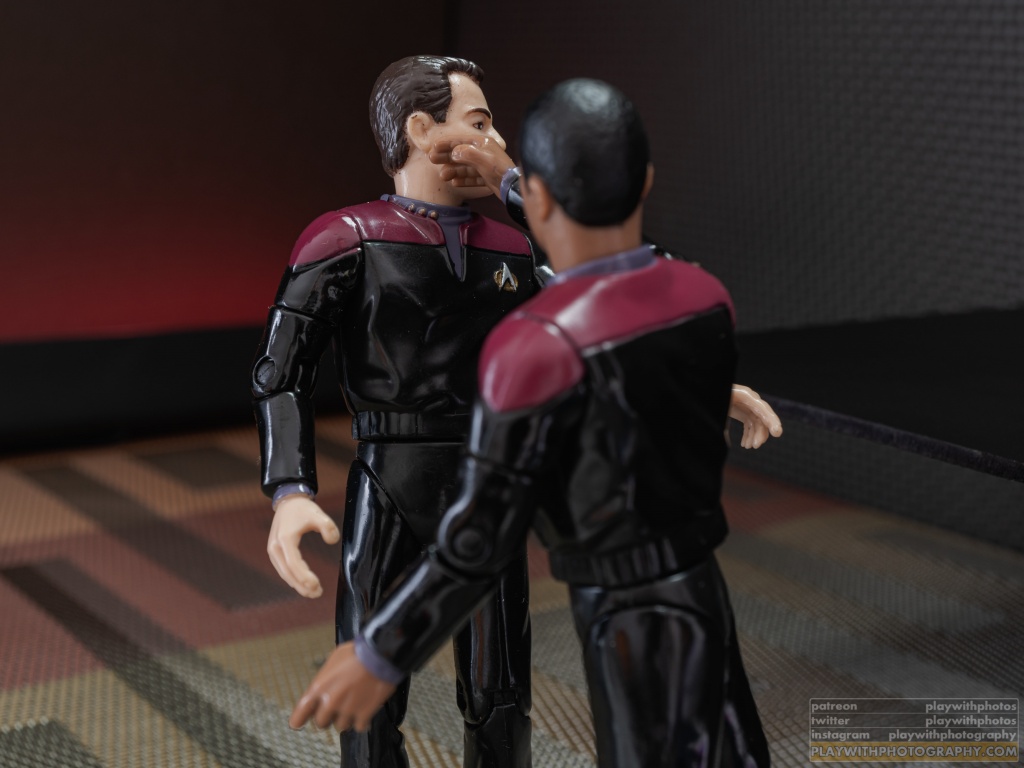 "You hit me! Not even my own father-- I mean Picard - Picard never hit me!" 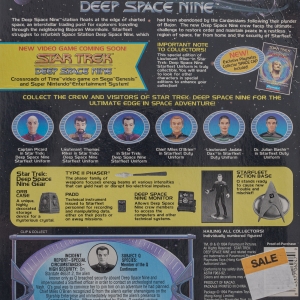 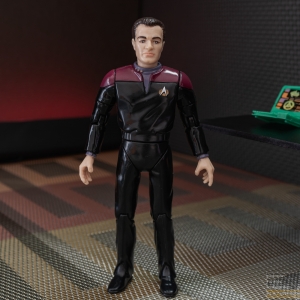 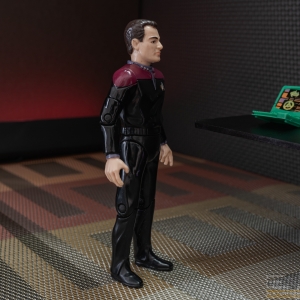 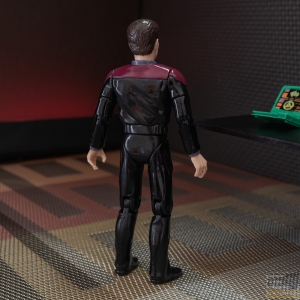 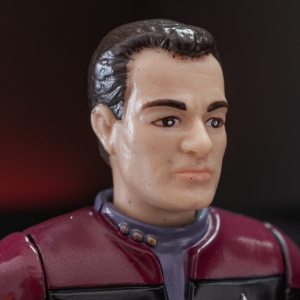 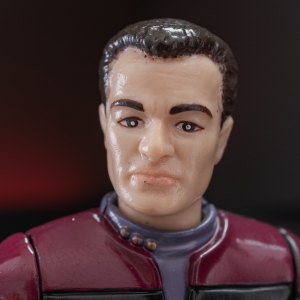 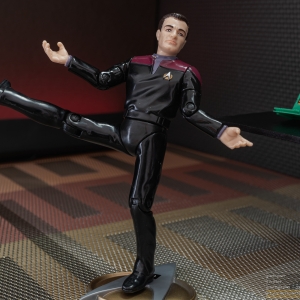 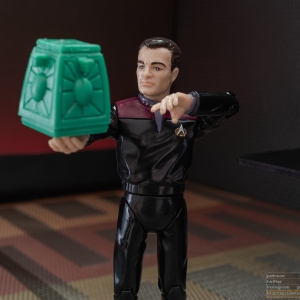 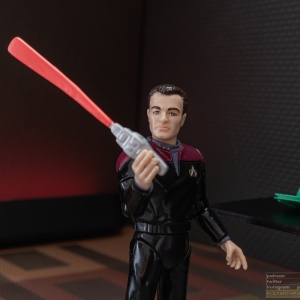 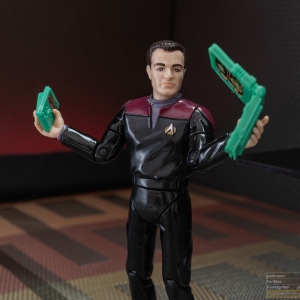 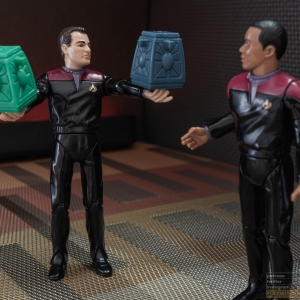 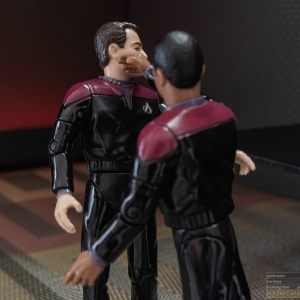 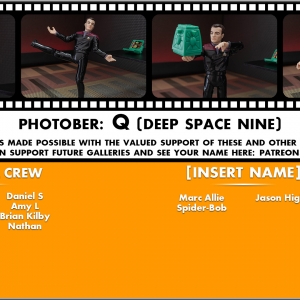