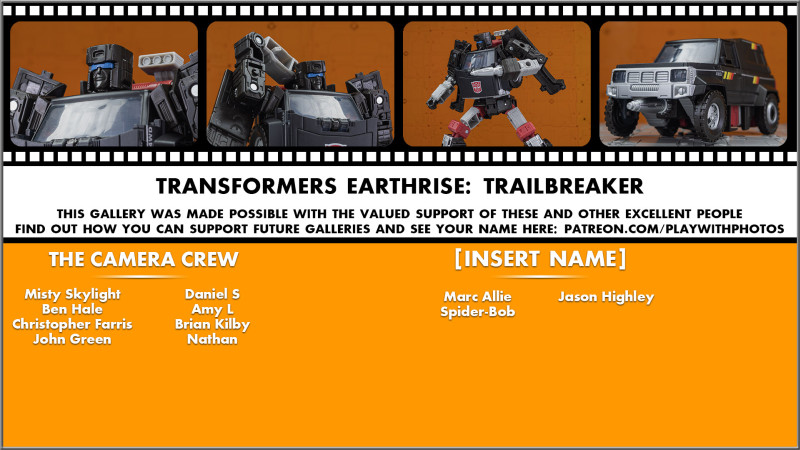 This gallery is available exclusively to supporters on Patreon. You can get access right now by becoming a patron for just $2 per month. Patrons can get early access to new galleries, and credits on the title card for each new gallery while helping to make content like this continue to be possible. You can click here or on the image above to head to Patreon and sign up!

The latest up on early access for patrons is my full gallery of Earthrise Trailbreaker!

This preview post is going to be a bit short since I don’t have a ton to say about the toy. It doesn’t solve anything that I might not have enjoyed with Hoist; all the integral parts are shared between them. Trailbreaker adds a new robot head, accessories, and switches out the equipment rack. As shown in some of the photos, the new equipment is either right up against the robot head or is half-blocked by it. I like the camper shell in both modes, though in vehicle mode it seems to prevent the gun and roof light from being deployed, which seems… wrong?

There’s also the plastic color. Trailbreaker is a very dark brown. It’s actually had to notice, and I didn’t even until someone mentioned it to me. The hood and roof are painted black, and in robot mode it’s hard to make out the difference between them. In truck mode when more of the two colors are right up against each other it’s a little easier to see. It’s a weird choice, but it’s at least dark enough to not immediately and constantly look wrong.

Trailbreaker isn’t bad, and if you liked Hoist more than I did, you’ll probably be even more pleased with it. But it is easily the least impressive part of this Deluxe wave, even given Sunstreaker’s american cheese-color plastic. Check out some preview photos below, and consider becoming a patron for as little as $2 per month to get immediate access to the full gallery!