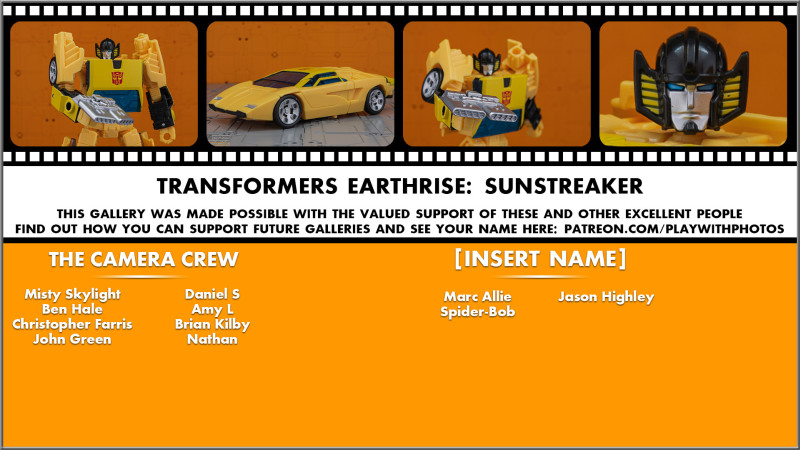 Sunstreaker ended up not being what I expected. Fortunately one area where this was true ended up being the colors, which is probably a good place to start. Photography and videos were not remotely kind to Sunstreaker in terms of what the yellow plastic really looked like. The weird, off-putting beige-ness often seen is not accurate, but at the same time this is not a bright, strong yellow either. The best description I’ve found for it has been something like “American Cheese”; it’s yellow, but you also know instinctively by looking at it that it’s wrong and not natural.

There’s almost 90 photos in Sunstreaker’s gallery. Too many to include in this post. Click here to see the full gallery! (but please consider reading the blog post first!)

There is for sure a disparity between the yellow of the plastic, and the few painted surfaces. It’s not as jarringly far apart as you’ll typically have seen before now, but the difference is apparent. It’s not even like paint and plastic mismatch is a new idea with yellows, this happens all the time. Usually though it’s the plastic that has the preferable finish versus the paint, which is sadly not true for this Sunstreaker. In my photos, I put some hours towards figuring out color correction tweaks to try to best represent the genuine color of the plastic, and how it differs in value from the paint. The paint color would not by any method I could try replicate correctly in digital color, so its shade is a bit off, but it is representative of the difference between the yellows. From my experience over the years, this could be a lot worse, even though it’s not exactly great as-is. 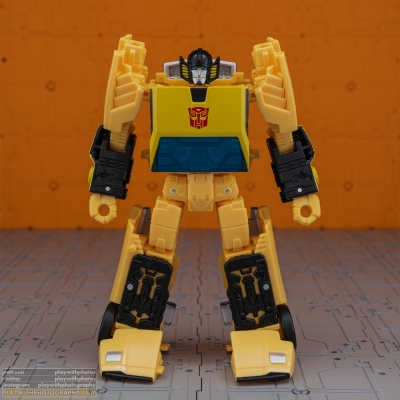 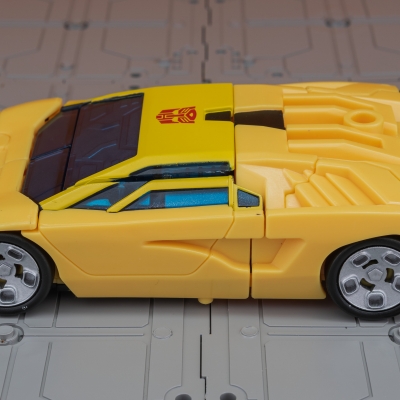 Another positive find was the car’s roof being able to come in much more flush with the body than a lot of what I had seen before getting the toy in hand. The fitting is on the tight side, so it does require some doing to get the panel pressed in where it needs to be, but the gap can be minimized pretty effectively. And as long as your particular copy has decent paint coverage, there shouldn’t be any meaningful color gap visible. That’s done a lot for my perception of the look of the car. Between these two factors, a lot of my trepidation about getting Sunstreaker was wiped away. 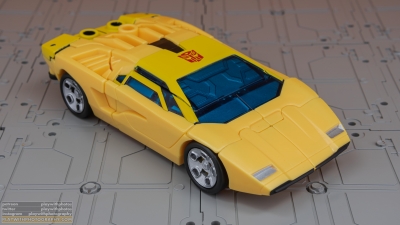 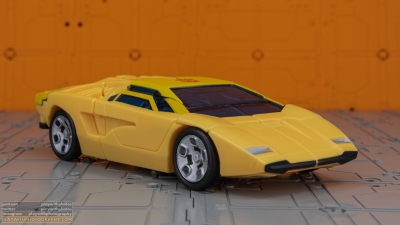 Getting past those preconceptions, it was time to have another one blown away. Ever since its reveal, it was largely believed Sunstreaker was a retool or shared parts with Wheeljack. It was obvious enough to look at the renders for Sunstreaker and be able to tell that the two worked roughly the same way, and even though there were clearly a lot of new parts to make the Lamborghini alt mode happen, it was reasonable to think some of the less visible bits would be the same as what was on Wheeljack. They weren’t.

It’s a pretty remarkable thing, from where I’m sitting. I did as thorough a study as I could of the two toys and I was not able to identify a single part shared between them. Sunstreaker is 100% new parts. Going further than that, while the engineering of the two toys is unquestionably related, the only thing that works in the same way between them is the torso and roof/windshield. The way the arms and legs work is distinctly different within the same array of available moving parts. This is probably the most “partial” Partial I’ve observed; I feel like even the new Datsuns have more in common with their Siege predecessors engineering-wise than Sunstreaker does with Wheeljack. 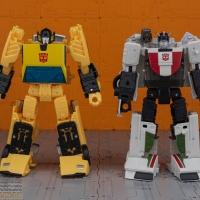 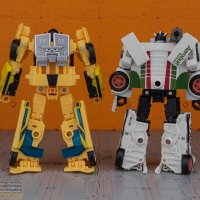 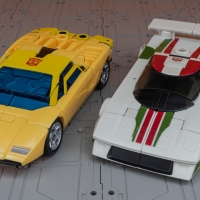 I like the feel of Sunstreaker overall better than Wheeljack. This interpretation of the engineering feels a little more solid, and it omits the most annoying part of transforming Wheeljack: those stupid little windshield fragments that have to hide in the knees of the robot. The feet are kind of dumb, having car hood detailing on the top and bottom, but slightly different detailing, because this was easier than engineering for the actual hood surface to be on top of the foot, I guess. The hood shape on both side gives a weirdly curved foot that seems like should be really unstable, but surprisingly, standing and posing is little if any problem for normal applications. More extreme ideas like one-legged stances might call for a stand, but in general I regard being able to stand or pose on one foot without outside support still an extraordinary feature, rather than a basic expectation. 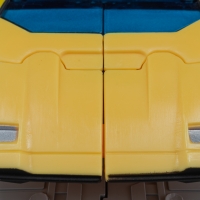 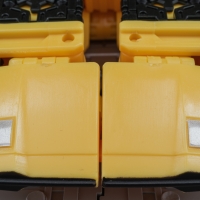 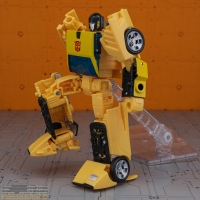 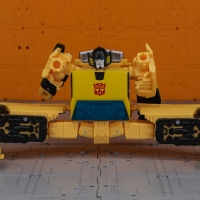 I think the thing I’m most disappointed by is the accessory. Sunstreaker’s engine supercharger is a separate piece, which attaches on a 5mm peg. This means it also is officially pressed to serve as the weapon for the robot. This looks so dumb. Plus, the engine intakes on the back are part of Sunstreaker’s silhouette that are supposed to be there, so removing that to be a poorly-thought-out gun (I bet Wheeljack is behind this) is even more non-productive. I think it looks dumb as a gun, but using one of the various 5mm ports, you can apply it as a decent looking small shield, if you must use it as something other than a backpack. Really hoping for an add-on option to come along. 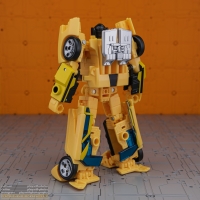 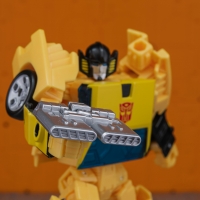 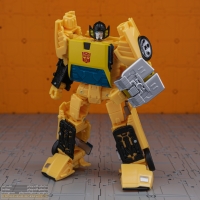 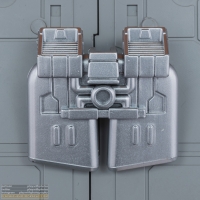 For the most part, Sunstreaker is pretty good. But getting past what the yellow seems to look like and the relatedly poor match to the yellow paint is going to be tough. I wish we still had Takara redecos to look forward to, since this would be a case I’d gladly rebuy for better execution of yellow. But it’s way less bad than I thought it was going to be, and the toy is itself pretty solid. Certainly enough that I’m very much looking forward to getting the mold twice more in the upcoming Selects set!

This gallery was available exclusively to my patrons at the $2 level and up before it was posted here. If you’d like to get early access as well as show your support and help me out to keep making content like this, please consider becoming a patron today!