Kingdom, the final part of the Generations War For Cybertron trilogy, takes us away from Micromasters as filling the $10-ish price point, and brings us the Core Class. Essentially Legends, except just a little bit smaller, because of course they are. The first assortment consists of an Optimus Prime (because of course it does), Rattrap, and the Fossilizer-adjacent figure Vertebreak. Oh, yeah. Kingdom is bringing back the Beast Wars also, if you missed that part of the story. Today I’ve just got Optimus Prime and Rattrap prepared, and Vertebreak will follow a little later. 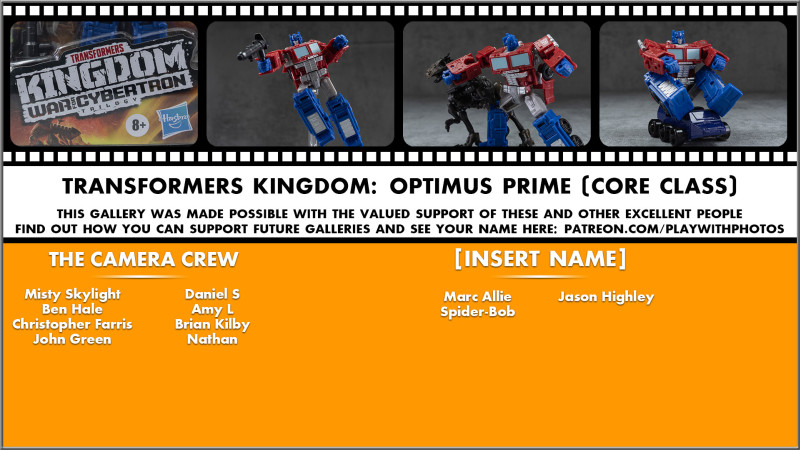 Core Class Optimus Prime has been looked at like an attempt at miniaturizing Earthrise Optimus, and that’s pretty true, at least visually. Though one or two concessions are made due to scale and necessary simplification, this does look a lot like a tinier version of an Optimus Prime you probably already have. For some that’ll reinforce a feeling of pointlessness towards getting this toy, and I won’t argue with that. For me it was cheaper to get the whole assortment at once than to just get the two toys I was originally interested in. But I’m not upset that I “had to” get Optimus. 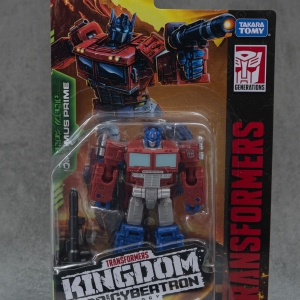 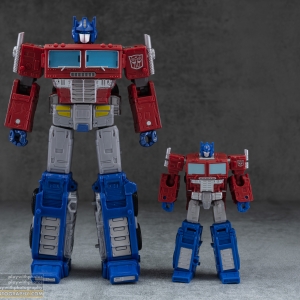 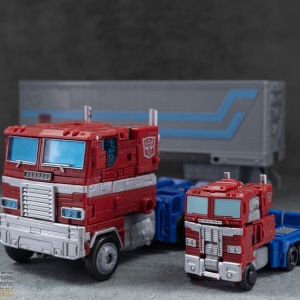 The robot is surprisingly poseable. The absence of a waist joint can be noticed a little more than I’d prefer, but you can patch over that a little using the transformation swivel mid-torso. Another transformation joint at the pelvis can also work up to a point as a makeshift ab crunch. Plus the transformation hinges in the shoulders will work to some degree or another as butterfly joints, all building up to that there’s more poseability in here than the articulation would ever really have intended. I didn’t think, starting out, that I’d be able to make this Optimus convincingly look like it was punching a zombie dinosaur skeleton robot in the face, but here we are, looking at Optimus Prime, punching a zombie dinosaur skeleton robot in the face. 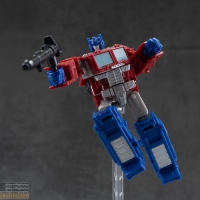 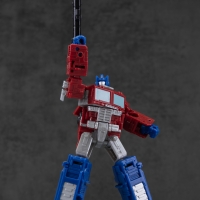 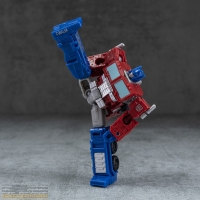 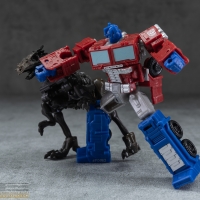 The deco is okay on any reasonably sizeable areas. The face is a disaster, though. You can tell it’s “off” at real-world scale, but it shows big and loud when you get to looking at the macro enlarged view. The sculpt seems fine, and if a copy exists where the paint apps are remotely precise, the whole thing probably looks really good. Just, not this sample. 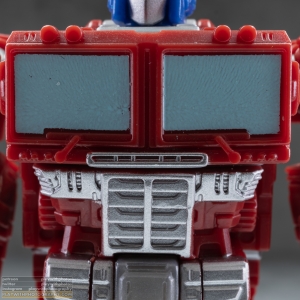 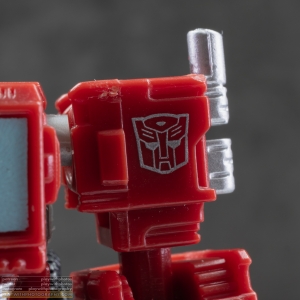 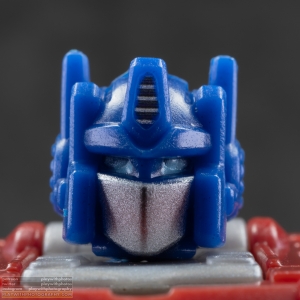 The vehicle mode is a box of compromises, which doesn’t surprise me. The front looks fine since it’s half the robot torso and half a cover piece specifically made to fill in the rest of the front of the truck. That works pretty okay. And it’s great compared to the sides. That’s an unrefined mess of robot bits trying desperately to cling together tightly enough to look like something, but completely not succeeding. It’s ugly, and not convincing of anything. The toy was clearly not designed with vehicle mode as a leading priority, and I’ll live with that choice. The robot was more important to get more right, I think. 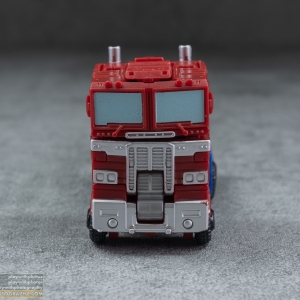 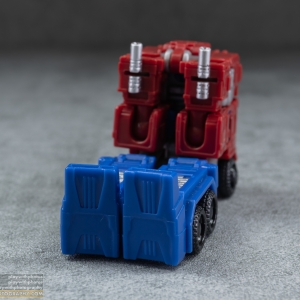 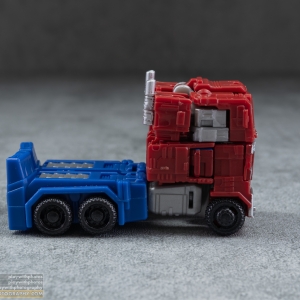 I’ll also go ahead and add that it feels really weird to have primary use of ball joints in Transformers again. Micromasters used them, sure, but anything large enough to be a figure on its own had an array of swivels and universal joints and such ever since Siege started. It feels weird to have the “fuzziness” of ball joint-based articulation back again, and I’m not sure if I like it or not.

I am sure though that I like both of these figures a lot. Rattrap is fantastic, and builds up a lot of confidence for this go with revisiting the Beast Wars characters. I was not a fan of the attempts made in 2013 and 2014. But the modern design team seems like they might have gotten it right, so I’m all up for checking out some of the bigger toys. But even Optimus Junior turned out unexpectedly nice, for what it is. The return of the Legends-size figures seems to be off to a pretty good start, and next time we’ll look at the last one, which is a bridge between this price point, and the Fossilizers that’ll be residing in the Deluxe range. 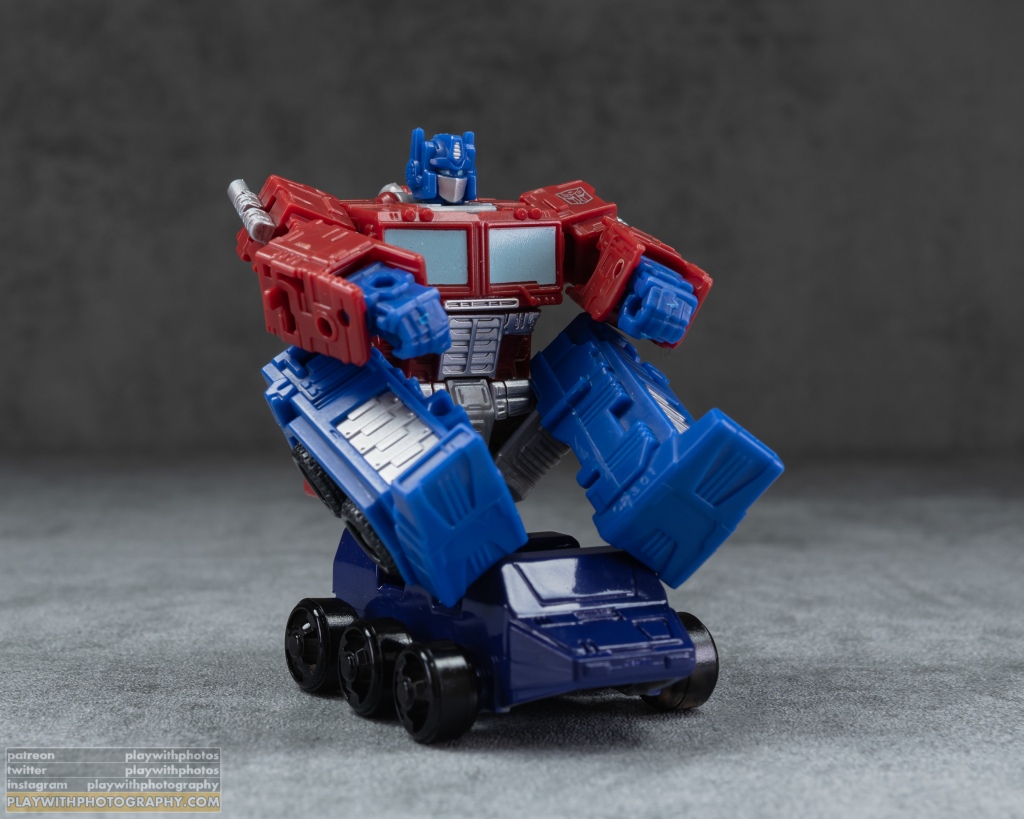