Why is Skywarp an eagle, and also a Maximal, I imagine you might be asking right now. There’s a couple of valid answers to that question as it happens. Firstly, there’s not a lot of ways to reuse Kingdom Airazor. While you can swap in a goodly portion of new parts and apparently end up with a Terrorsaur (that I am all kinds of eager to get hold of), otherwise you can only redeco it as another Transformer who is an organic-styled bird. Which I guess there’s not that many of, when it comes down to it.

That basically covers why this is an eagle, but not really why it’s a Maximal named Skywarp. There was two real options here: Maximal Silverbolt, or Maximal Skywarp. Both represent the eagle from the Magnaboss combiner, the only difference is which market they were intended for. So in order to toss an arguably more interesting reference our way, Hasbro went with the Japanese Beast Wars II identity for the toy. Of course, either way this toy is not a combiner, nor is there a Lio Junior or Santon to accompany. But I guess they did what they could with what they had. In any case, the legacy name reuses in Beast Wars II mean absolutely nothing, so there never was and still isn’t any connection to the Decepticon Skywarp. 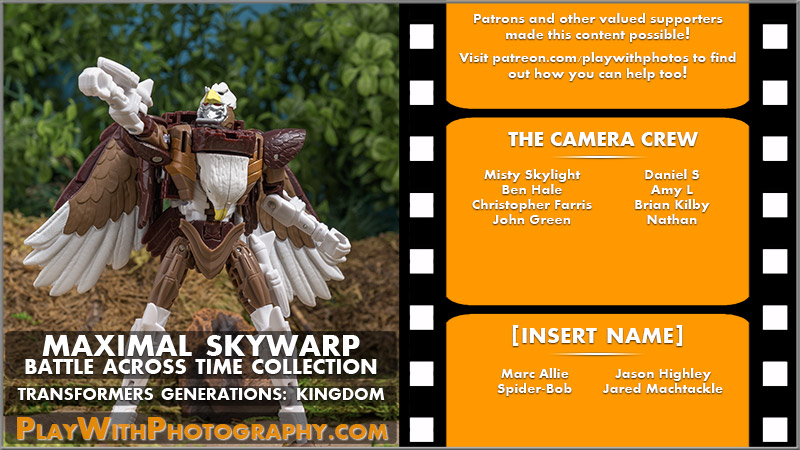 Skywarp is a redeco and head swap of Kingdom Airazor, and Kingdom Airazor is one of the Beast character updates I liked the best out of the line. I explained that once (maybe on RFC?) as being because this mold feels more like it has the spirit of original Beast Wars toys more than most, in particular the way that it would beg and plead to have you never look at the beast mode from underneath, while it spends all its time making a nice looking bird on the top. Arms are just sort of stuffed along the flanks in a way that kind of makes them less noticeable but doesn’t really hide them, and the robot legs are just all right there, even if they are contorted around to suit the needs of the beast mode. This toy has the look and feel that I want it to, for the role it’s trying to play, and most of Kingdom’s Beast Wars toys I simply cannot say that for.

I like Skywarp a little more than Airazor on account of the deco. Airazor’s colors always seemed a little too muted to me. They needed the saturation turned up. Skywarp comes out bold and bright, and it makes the mold look really good. Anatomically, it’s not the most correct-looking eagle around, but for what it was working with, the deco does a decent job convincing you it could be, and referring back to the prior paragraph, it’s pretty well in the spirit of Beast Wars anyway for the beast mode to bear only the most basic resemblance to the animal it wants to be – even if it were an all-new mold! Another plus with this deco? No evidence that this toy will ever suffer from gold plastic decay like the original Beast Wars Silverbolt or Skywarp do!

Skywarp is also a more comfortable handling experience for me than Airazor. See, my Airazor has very stiff hinges in the wings, which always made me fearful of one or more of those joints cracking with use. But Skywarp’s hinges are much smoother. Plenty of tension to hold poses, but they move much more easily and less concerningly. That’s important, too. I love the way the wings are built on this mold and am always wanting to mess with them. They’re poseable enough to have a bird in flight or to look reasonably natural “at rest”, and that much alone is often a noteworthy accomplishment! For the robot mode, you retain the benefits of all of that flexibility. The wings can fully spread out to do the full BIIIIIIRRRRDMAN thing, but they can also fold back and semi-collapse on to the back for a much slimmer silhouette. Depending how you do it, they might hang out the back a little bit, but it’s nothing I consider terrible, nor does it go so far as to trouble the toy’s ability to balance. I really have to applaud the design and engineering of the wings. They’re a feature that really makes the toy for me.

Skywarp’s new head is based on the original toy, but doesn’t work like the original toy. See, the original was a rather simple thing; Magnaboss was a three part combiner sold at the $20 Ultra price point (1997 was truly an amazing time) so you had to have three figures somehow fit in that total budget. As a result, Skywarp/Silverbolt was a little smaller and simpler. For instance, the robot face kind of just existed under the neck of the bird, and in robot mode, the eagle head folded down over top of it as… a, uh… hat? So the character design involves eagle head details as part of the “helmet”, but it’s based on the actual eagle parts of the toy. The Airazor mold transforms differently, so this Skywarp has a fake eagle helmet while the real eagle head stuffs down in the torso. It’s not that different in concept from how Airazor’s head was always depicted, actually; this is just more detailed in execution. The head ends up with quite a bit of paint on it, which sadly softens much of the sculpt work in exchange for the whole head not being light brown.

Skywarp came in the same set as Earth Mode Sideswipe from last week. And I actually enjoy Skywarp more? This is rather in contrast to the other set with Mirage and Maximal Grimlock, where I enjoy neither toy. I can’t really say that my enjoying Skywarp is unexpected, because I already knew I liked the Airazor mold a lot, and the deco on this looked good from the start. I guess it was a surprise I came to like it more than I enjoyed Sideswipe, but I’m also many Sideswipes deep at this point, so I’m probably just a little tired of it while this mold is still pretty fresh.

In which case let’s hope they stop with this body plan after Terrorsaur so I can leave off on the mold family while it’s still on a probable high note. …although. Hasbro has a perfect chance to Selects up a two pack of the Terrorsaur retool and Core Class Rattrap to reference Botcon 1997’s exclusives Fractyl and Packrat. So okay, they can do that, and then let this rest. I’ll allow it. 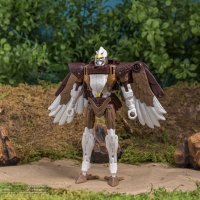 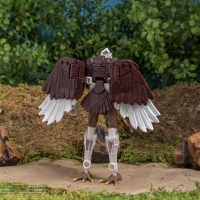 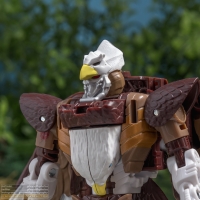 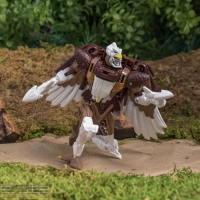 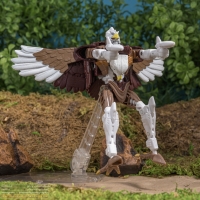 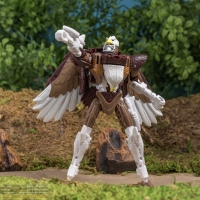 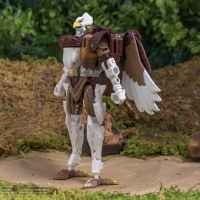 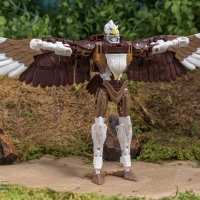 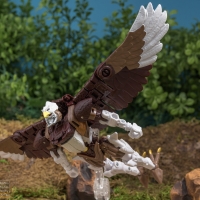 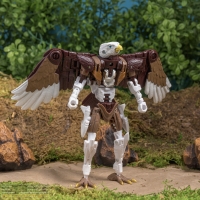 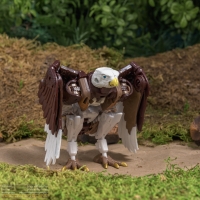 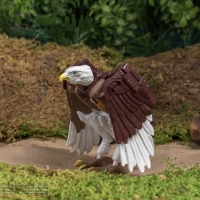 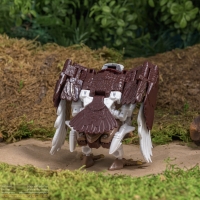 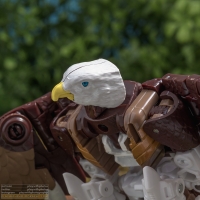 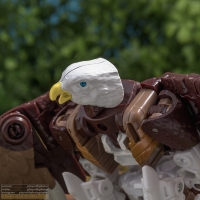 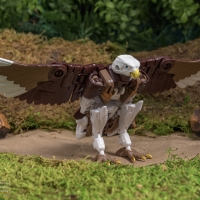 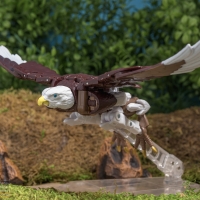 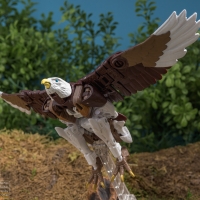 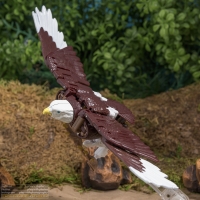 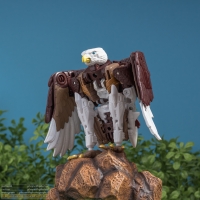 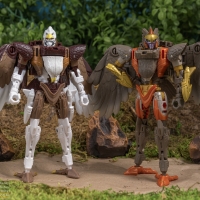 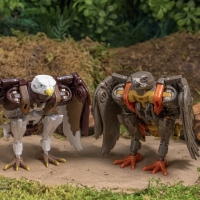 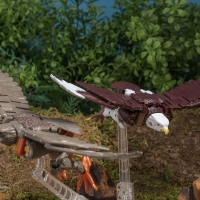 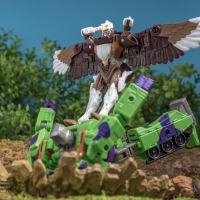