So this whole week, I have not presented any genuine Transformers to you. You may or may not have noticed that as we went along, but it was indeed not by accident! And we’ve gone on a sort of journey getting here, from unlicensed toy based on Hasbro IP, to an outright knockoff of a genuine Transformer toy in unique colors, to the ultimate expression: A knockoff of an unlicensed toy based on Hasbro IP. The layers. And even better, this isn’t a nice bootleg like Sunburn, this is an atrocious piece of crap out of an Easter basket! 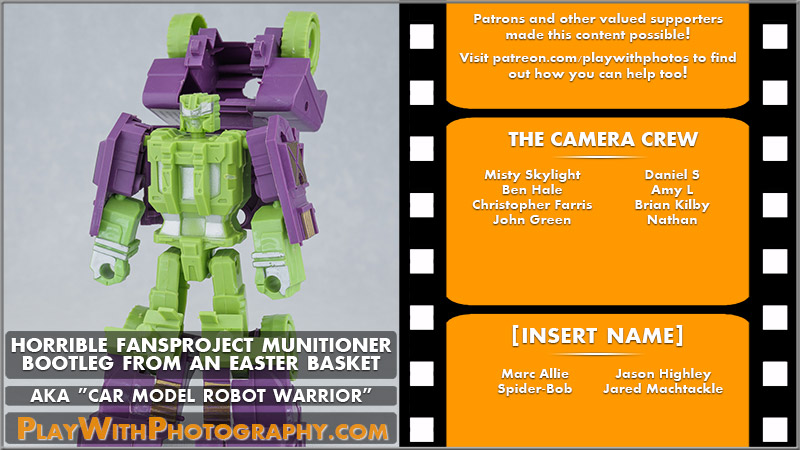 For the uninitiated, Fansproject Munitioner was one of a pair of complete figures produced around 2010 as aftermarket addons to upgrade a redeco of Energon Bruticus Maximus to be more G1, by standing in for Blast Off, and in this case, Swindle. This was 2010 after all, and we didn’t even have Fall of Cybertron Bruticus yet, nevermind Combiner Wars/Unite Warriors, and the prospects of any better modern take on G1 Bruticus coming along seemed remote. This was a really popular option at the time, and the third party figures as well as the Target exclusive combiner set they were designed for jumped in price quite significantly!

There doesn’t seem to be a lot of coverage of this item out there. In fact, in doing a search to recall what year this was available, the only result I found for it was an April Fools Day review from 2015 (which was probably the release year). And I wrote that review. So it might actually be that the only archival coverage of this toy on the internet is specifically the example I own. I feel so special.

The gallery for this is going to be short, because I am highly unwilling to handle this thing any more than I can help. It has miraculously survived the last six-ish years, and I’d like to prolong its life as much as I can. 15 years ago, you could actually get some passable quality knockoffs out of reasonably priced pre-made Easter baskets at big box stores. Aerialbot sets were a common feature, for example. But this is far from that level. Bootleg Munitioner, or “Car Model Robot Warrior” as it was packaged, is made out of a grade of plastic not at all dissimilar to crayon wax, and I wouldn’t be surprised, were it left in a car on a warm day, to return and find it reduced to a purple and green puddle, quite possibly emitting toxic fumes. It is truly a cliche for bad bootleg goods.

The basket this was part of was a steep $15.99 (according to my original notes, anyway) and the objective quality of the toy is nowhere close to that. But wait, there’s more! Each basket had two toys in it. The common toy was a bootleg of an Energon combiner limb, which could be paired with either Munitioner’s bootleg, or a bootleg of the Fansproject Explorer figure. I don’t know where the Energon limb this came with is. It might be in storage somewhere, or it might have gone on to a new home or perhaps landfill in the intervening years. But I guess a pair of these for $16 is a little better, but it doesn’t excuse that the material quality is laughably awful.

I don’t own an original Munitioner, though not for lack of attempting to wheel and deal my way in to a set back in 2010. But I do know this bootleg to both be drastically simplified, as well as noticeably oversized. As any good bootleg should be. That being the case, the volume it takes up is pretty good, but functionally it barely manages to be a transformable thing with the moving parts it still retains. Despite the simplification, a vestige of its original intent as a leg for a Bruticus remains: on the rear end is a port that is where the Energon-mold Onslaught figure would have plugged in to the real Munitioner. I guess for the bootleg folks, that was worth leaving alone, since the hole meant that much less material per unit would be needed.

RAC got the Easter basket with the Explorer bootleg (Airplane Model) in it. I wasn’t inclined to double-dip on a $16 purchase to have a complete set, so I’ve never seen that one in person. But I bet it’s every bit as hilariously awful as this one. I hope Rob still has it. You just don’t get novelty like this at a major US retailer such as Walgreens nearly often enough.

I’m so happy to own this thing. It’s an atrocious piece of garbage that should never have been positioned to be given to children, and I still believe it’s only one wrong sneeze away from crumbling to dust, but I love it and am delighted it existed long enough for me to experience it, and to go on to share it with you here. 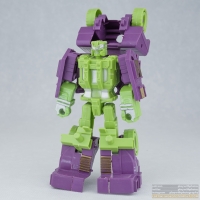 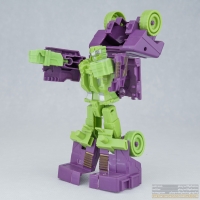 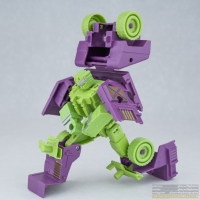 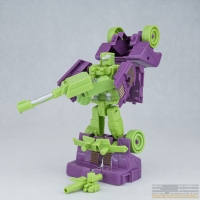 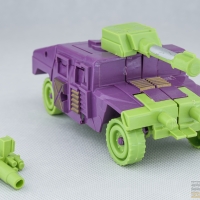 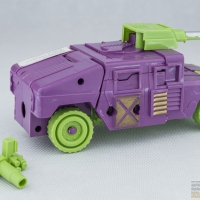 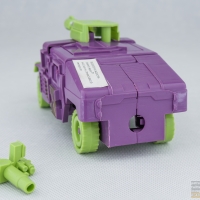 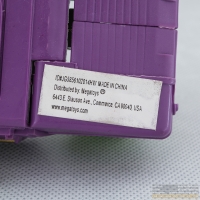