I was skeptical about the Weaponizer component of Transformers Siege initially, based mainly on how Cog clearly could not transform to its very basic vehicle mode without parts removal and replacement. But in hand, the play pattern is so strong that it overrides basically everything else. I didn’t care if I had to take it apart to transform it, because I wanted to always be taking it apart to equip on other figures in as absurd a manner as I could manage. Sixgun, from wave 2, upholds this core strength of the play mechanic.

It’s not to say I didn’t experience problems with Sixgun, unfortunately. Mine suffered some unfortunate quality control failures. Oh sure, we’re used to occasionally seeing pegs and sockets that don’t fit together exactly perfectly or a loose joint or something. I can typically live with those, so they didn’t present as a real problem to me. No, what really stood out was the entirely missing pin from one of the wing hinges. The hinge – which on reflection I suppose was more in practice a suggestion rather than a hinge without that all-important pin – the hinge was able to hold together pretty much just on friction, but any pull or strain on it would soon see the assembly slipping free of the toy. It was very convenient that I had a spool of stiff wire on hand that was almost a perfect fit to the diameter of the channel the pin was meant to occupy. I was able to repair that defect, and then proceed with business as usual.

And I’m glad that I managed to solve that problem, because Sixgun is pretty great. The robot mode feels a little more flexible than Cog, though that may be something of an illusion based on having a slimmer, less blocky build. The articulation pattern is effectively the same, though executed slightly differently in some respects. For instance, Sixgun’s arms attach to the body at hinged pegs on the torso, which provide for outward movement of the shoulders. By contrast, Cog’s arms had the pegs to attach to the torso and also an outward hinge built in as part of the arm. Now, this does mean that ideas like giving Cog arms from Sixgun won’t work, unfortunately. More on that shortly. There isn’t much else that’s notably different in how the robots are put together. I generally found Sixgun able to look more dynamic more easily when posing, but again that’s probably more a function of being less boxy looking.

Sixgun pulls way ahead though when transformation is factored in. There’s still required partsforming to get there, and probably to about the same degree. But Sixgun’s engineering goes a little farther, so that the vehicle mode looks far less like just the robot laid down. The torso unfolds to make the wings, unwrapping from the abdomen and pelvis block as the main partsforming chunk. But the shape change is comparatively drastic, helping to separate the forms more fully. It’s unfortunate that the arms still must be removed and attached in a different place between modes. Had the wing assembly been the only bit of parts removal, I think more people put off by the partsforming nature might have been inclined to overlook that perceived flaw.

Sixgun’s vehicle form is an airship that’s not trying to be any kind of analogue to anything real world. So instead it focuses as best it can on being interesting looking and also pointing as many guns forward as possible. The stability of the vehicle mode is going to depend a lot on the specific tolerances of a given copy. The wing assembly attaches by a single 5mm peg, so if the fit on that is off a little, you’d find it probably being difficult to keep together. Likewise for the VTOL engines (the robot arms) which must attach via peg and port and rely on the right amount of friction to avoid both sagging, or straight up falling out. Thankfully being accessible pegs and such, standard thickening solutions can be applied easily if the tension needs to be improved a bit, so off tolerances won’t automatically be a disaster. 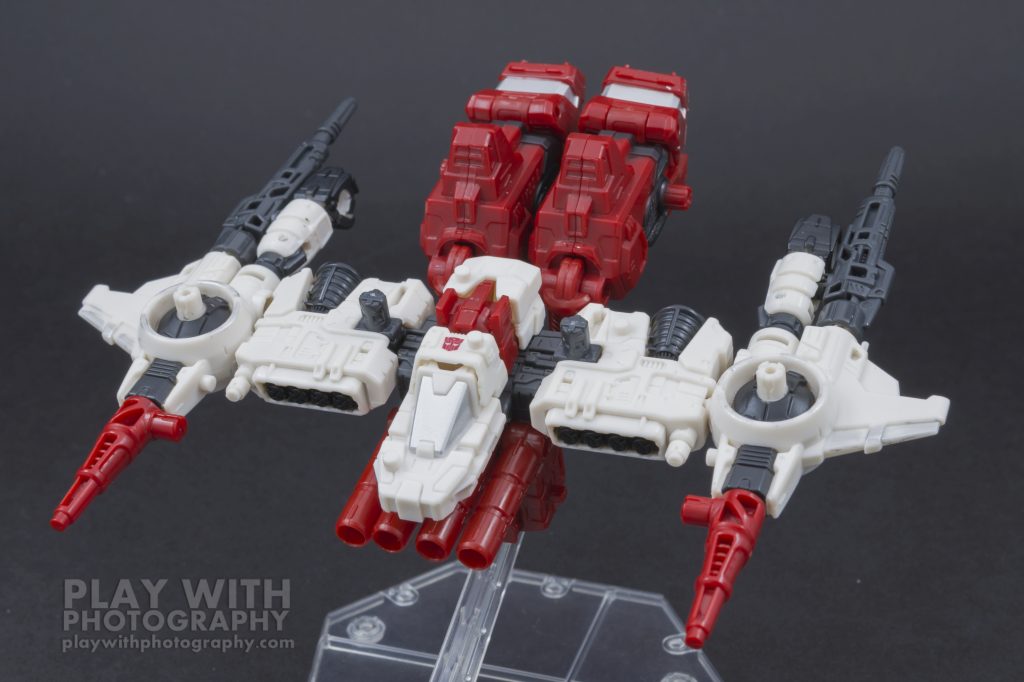 Sixgun’s big fun though is gearing up other toys, and it goes in very different directions than Cog in doing so. There are some small arms style weapons, including new copies of the same small gun/”missile” Sideswipe came with, as well as two longer black rifles. Otherwise the only weapon concept this shares with Cog is using the lower legs as large guns. Sixgun’s legs make some pretty decent large cannons. They can be hand carried like huge rifles, or if a figure has ports in the right orientation, they can be equipped to great effect as mounted weaponry. The thigh sockets look enough like wide barrels that you can leave them alone, but the small red guns can be attached there if you want to go for a little bit different effect. But everything gets more fun and imaginative from here. 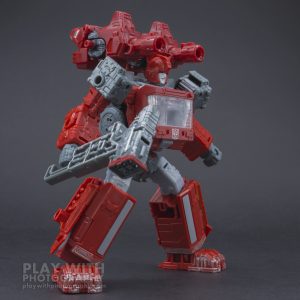 The lower torso block is described as a guided missile launcher, and you certainly can flip out a peg and have another figure carry it around like that. But you know, it also makes a pretty fair giant hand. The “thumb” ends up comparatively undersized, but it’s very pleasing how well this application works otherwise. On most any figure with a wrist swivel, you can get a very natural looking attachment as well as getting reasonable poseability out of it. For a figure like Sideswipe who does not enjoy wrist articulation, it’s harder to make good use of the part in this way – but you can still fake it.

The robot’s arms are intended for use as rifles, with the black guns attached. Going back to what I was saying about switching arms with Cog – you can plug the gun handles in at Cog’s shoulders if you really want to do wacky parts swapping, but you do lose any outward shoulder movement, for starts. Anyway, I’m not a fan of these as guns particularly. Instead I’ve found I like them if I place them on ports on another toy’s lower legs. Since these pieces have the VTOL motors for Sixgun’s vehicle mode, they stand in well enough as something like hover boosters. There’s still the matter of plainly visible robot limbs sticking off, but you can’t win them all. 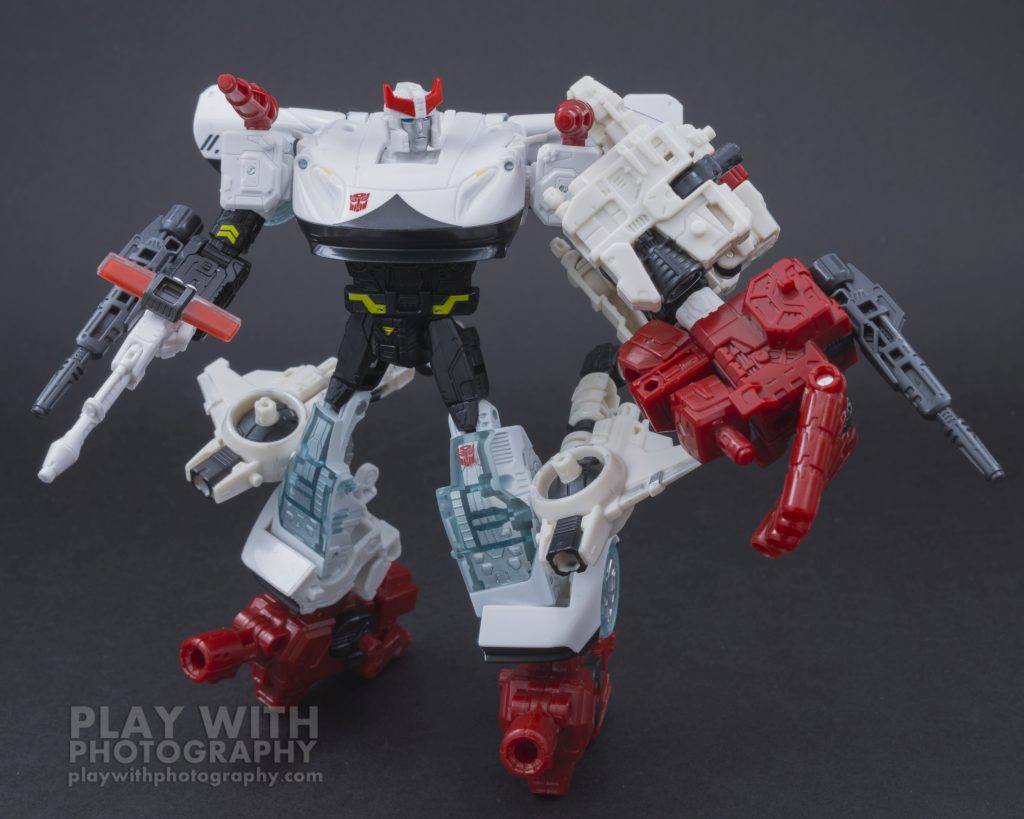 And then there’s the wings. Since most every Siege figure has a centrally-placed 5mm port on its back, this can equip to almost anyone as a rocket backpack. Paired in that way with the arms as leg-mounted jets, one can easily envision the outcome as a boosted mobility mode. I like this pretty well, but I wanted to go further. So naturally I put the arms back on to widen the wing span, and just had figures standing on it as a flying wing. My Gundam background will show since I reflexively refer to this as a Sub-flight Lifter, but there’s more than a little Dodai or Base Jobber about this. For best results it seems like using the outward most pegs is preferable. For the toys I’ve tried it with, it made for more natural looking posing. But it is of course possible to just use the middle pair of pegs. Unless you’re trying to put Hound on this, in which case his feet are annoyingly too wide to fit. 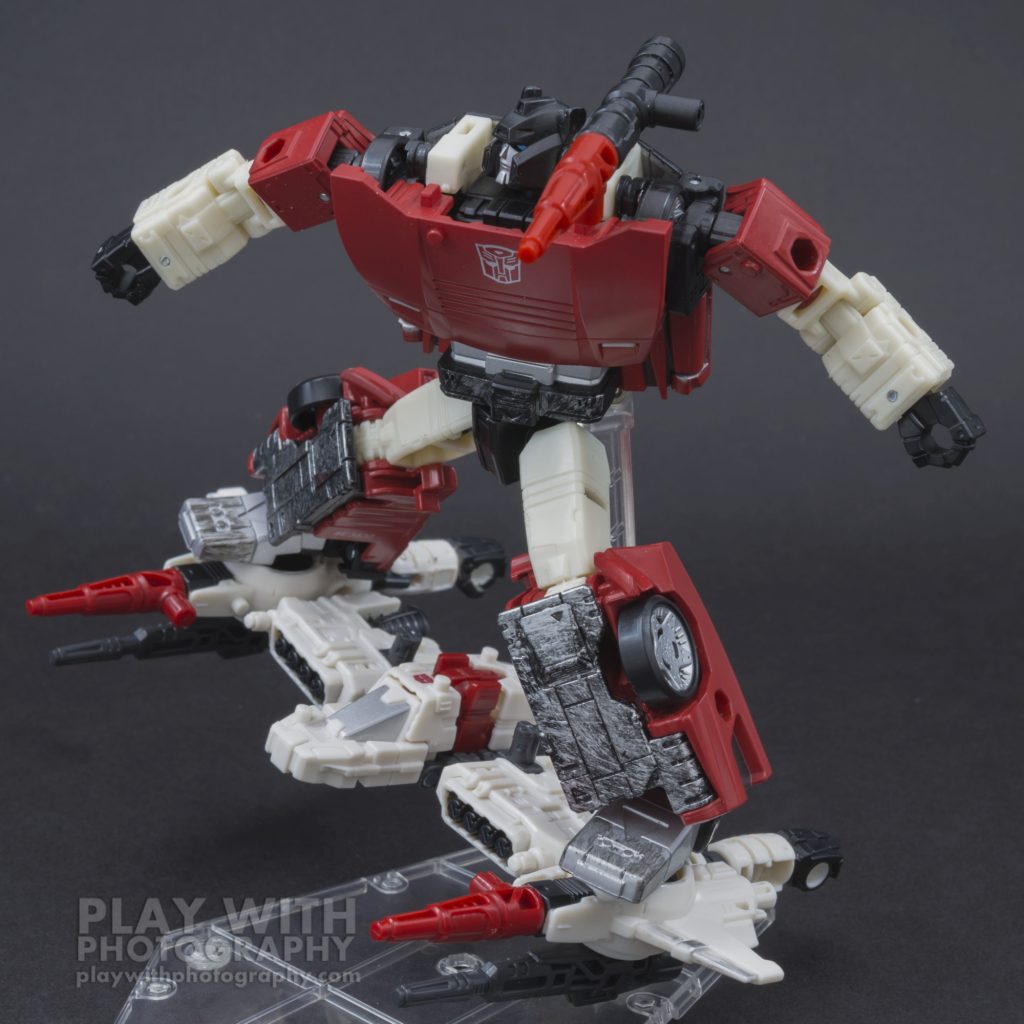 But wait, there’s more! Going back to the Giant Hand, you don’t have to just settle for a big hand at the end of an average size arm. You can plug the wing unit on a forearm and fold the wings around, producing a sleeve and making the hand look like part of a bigger equipment unit. This option proves particularly useful if you’re trying to fit multiple Weaponizers on a single toy, since it can be all too easy to run out of space through careless augmentation. 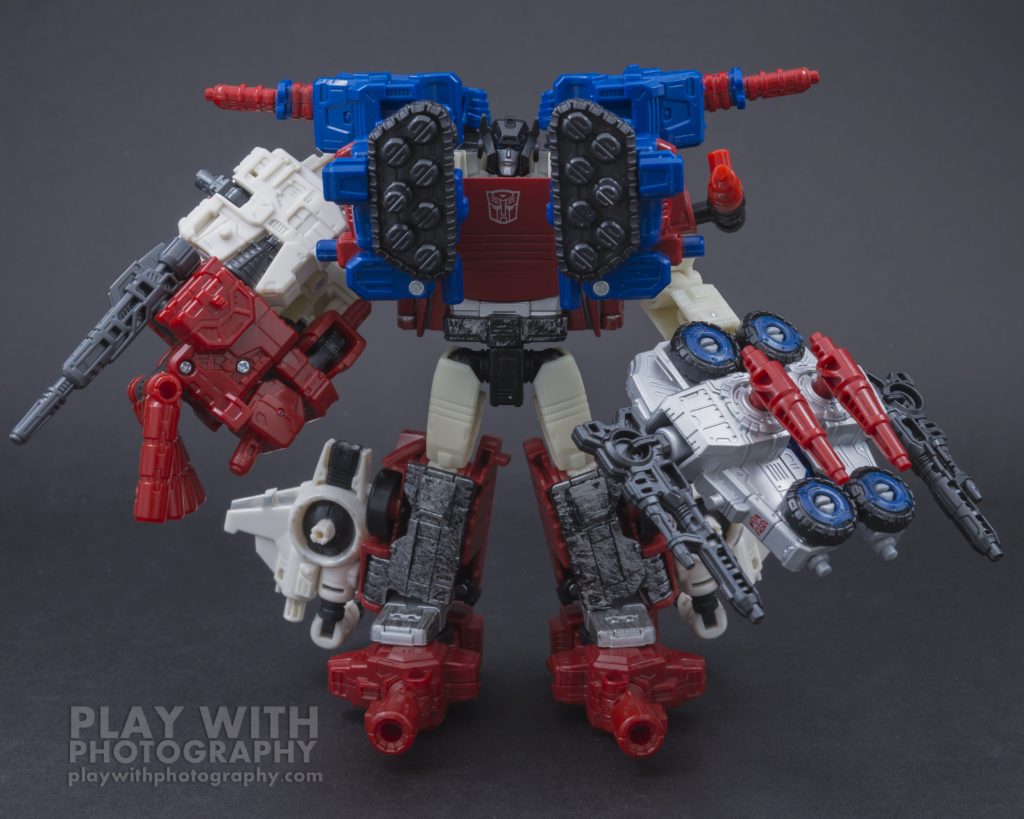 …which also brings us back to a problem. Cog felt in many cases like the design had been purposely sabotages to limit what was possible. As you try to go farther and get more creative, you notice increasingly how there’s always a peg or port missing or not in the right orientation, or just a centimeter or so off position to make everything able to work how you need it. Sixgun is a little better than Cog for presence of extra attachment points, but there’s still shortfalls. The lower torso block could benefit from at least one more 5mm port, the wing unit likewise would be well served by having a port on the bottom, perhaps adjacent to its 5mm peg. And pegs along the front or back edges would open up much more potential for piling weapons together. Weaponizers are one of my favorite new play pattern features because there’s so much you can do with them. But yet it still feels like the concept is only being executed to maybe 70% of its potential. That’s still a very strong showing, but it’s also serving to make apparent what’s still missing, and that sometimes feels frustrating.

Anyway, Sixgun is a box of fun from start to finish. It picks up the promise of Cog and takes it further by not just repeating what’s already been done, but expanding and giving new ways to play. I really don’t want to get my hopes up and begin expecting that Brunt will be another corresponding step forward, but it is much harder to not anticipate that third Weaponizer mold all the more after seeing how much of a leap was possible between the first two. I’ve heard from a surprising number of people that are opting to pass on Sixgun because they don’t have a Generations Metroplex. Just… don’t do that. You’re only robbing yourself of a healthy amount of enjoyment that in my opinion does not at all need Metroplex to feel complete or fulfilling. It’s not like I have a Metroplex either, and I’m already planning for what I’ll do with my second and third Sixgun.