Reflector is something that has been a struggle to get a real updating of for as long as Transformers Generations, or “Classics”, has been a thing. Previously the only modern toy made with the intent of being Reflector was a small accessory piece included with the Legends class Shrapnel, released something like 5 years ago now. There was the Botcon 2016 option too, retooled a bit from Legends Shockwave, but it still wasn’t quite there. But now, with Siege, Reflector is finally getting a proper, long overdue update. The only catch is you have to be able to buy three of it. 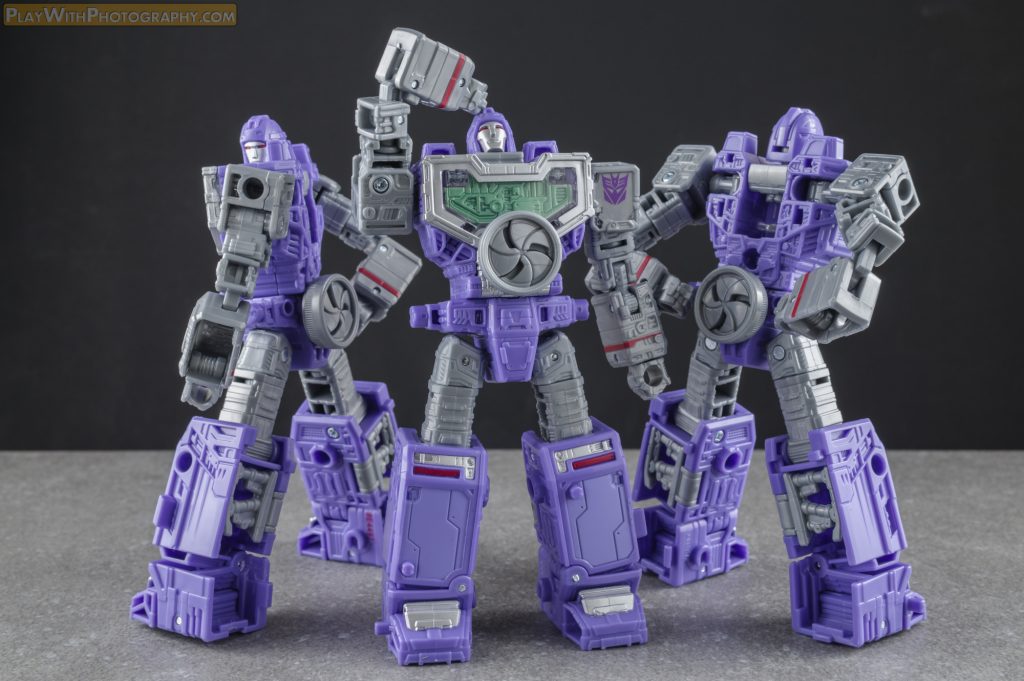 Buy Transformers Siege Refraktor on Amazon and help the site!

Individually, Reflector – or Refraktor, thanks to trademark naming – is a fairly competent Deluxe. If a tiny bit on the small side. There’s Scale reasons for this, owing to Reflector in the cartoon being noticeably smaller than most of the rest of the Decepticon cast. It’s also partly thanks to the included accessories being pretty big and taking up an unusual amount of plastic mass for a Deluxe toy.

Reflector’s articulation is pretty good, making sure to hit all the standard basics we expect from Siege toys. And thanks to being able to utilize transformation joints, we even get some bonus poseability like rearward swing for the shoulders, and the ability to angle the head up despite the ball joint neck having a very deep-set socket. In my handling, the only things I felt like I was missing were wrist swivels, for aid in posing with the shield and rifle, and maybe a deeper knee bend. The wrist swivels are something only a few Siege toys have benefited from, and that’s usually just when the hands don’t need to be flipped inside the forearms to hide in alternate mode, so realistically that was probably never on the table here.

The accessories themselves are pretty fun. Mainly you get a rifle and shield. The shield can either be hand held or peg directly on the arm. The size and shape make it pretty credible as a shield, and give impressions of riot gear. The rifle is huge, especially compared to Reflector, and I love it. Some of its design is dictated by the second job it has to do, but that aspect is integrated well and makes a great looking sci-fi space gun. The shield and heavy rifle make Reflector look like he belongs as part of an assault force, and since at least limited troop building of these is more or less required, that’s a great aesthetic to have. The other accessory is the aperture ring – the iris of a camera. It attaches on the abdomen using a non-standard 4mm peg – so sadly swapping it out with other normal accessories won’t be an option. It also means there’s only a few predetermined places the piece can be installed on the toy. One is specific for vehicle mode, one specific for the bonus combination, and in robot mode there are two places to connect this part. One in front, the other around back… 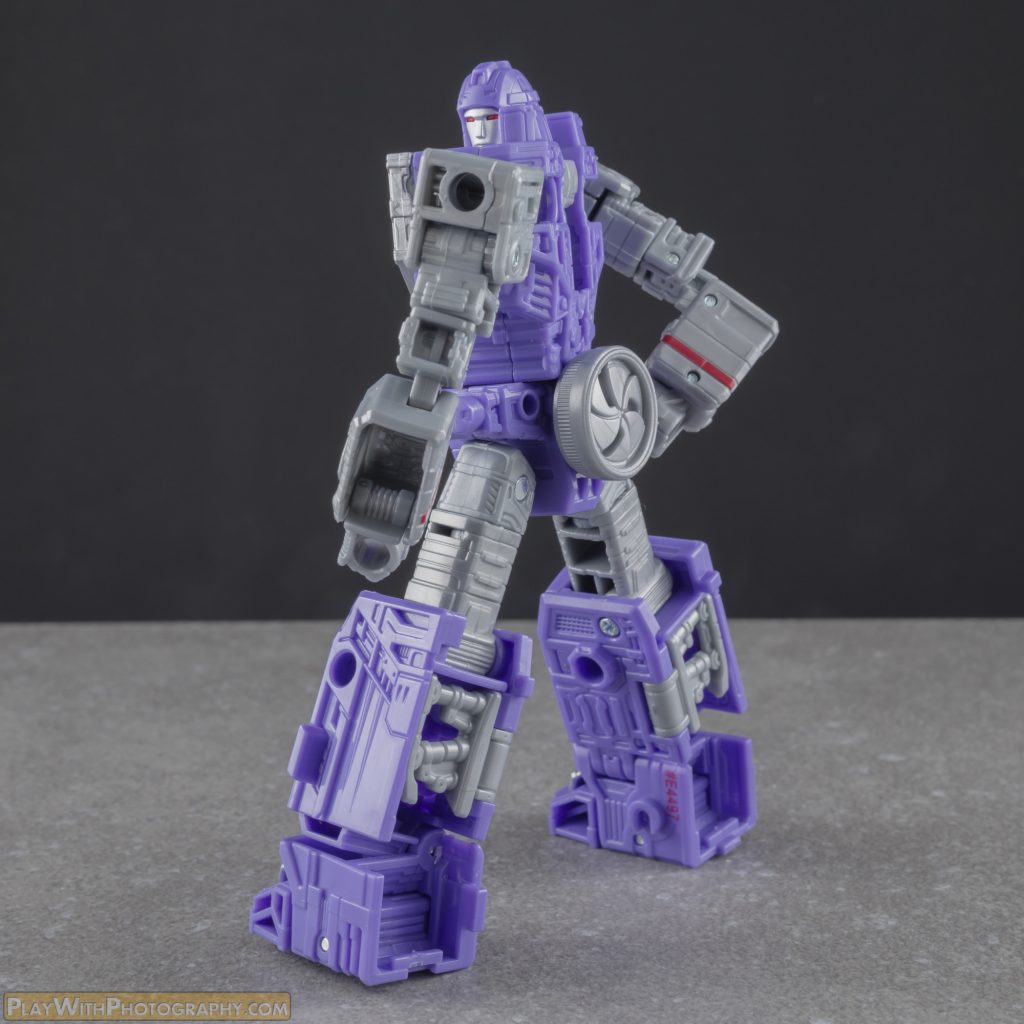 Reflector’s alternate mode is effectively the robot laying down on its back. There’s a tiny bit more to it than that, but it’s not at all a challenge of engineering. That said, I think as presumably-flying slabs of robot go, this comes off a little bit better than Soundwave’s go at the old Battle Slab. Or maybe I just feel like that because Reflector is smaller and a little cheaper.

Or maybe it’s because I figured out that rather than being a space- or airship of dubious credibility, it is in fact much more suited to being a Power Blaster, especially if you happen to have a pair of extra Reflectors hanging around. 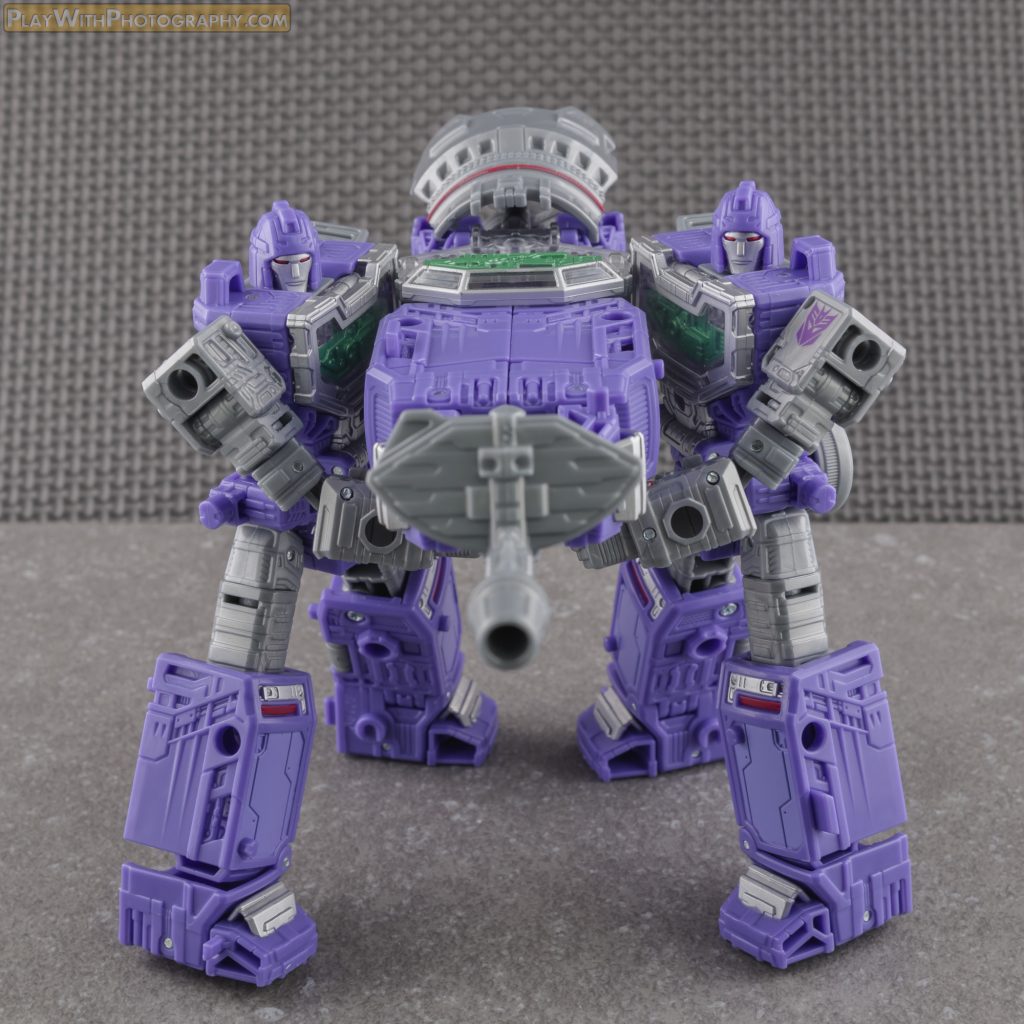 But of course there is a much better thing you can do when you have three Reflectors all at once. Too bad it’s not documented or even hinted at in the instructions, leaving would-be buyers possibly completely uninformed of the extra feature this mold was engineered around. At least if they aren’t tuned in with the online communities, I guess.

If you fold up Reflector in a certain way to make a cube, and then do the same thing with two more copies, you can peg them all together to make  a bigger box! AMAZING! But then if you take the three shields, and put them together, they make a full camera lens barrel. And the three guns? They peg together and make a tripod! Then you can take one of the aperture ring pieces and tab that to the top of the tripod, and plug the whole assembly in the bottom of the Reflector Box, and attach the lens, and you end up with something not entirely unlike a camera! 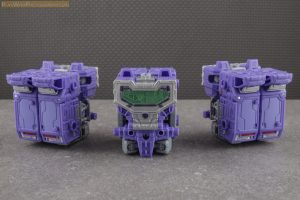 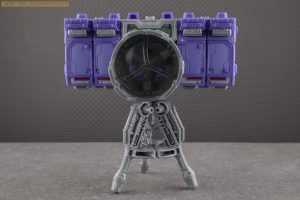 The camera mode is very sturdy, thanks to four connection points on each side making sure everything lines up perfectly and that each chunk has a solid grip on its neighbor. Now of course this is visually really basic as a camera. The accessories are doing almost all the heavy lifting in selling the concept. And let me tell you, I dig mightily the idea of making the tripod out of the rifles. As good as designing a shield part that is a perfect third-of-a-lens, I really feel like the tripod guns are especially inspired. I also found that it’s easy to take the two leftover aperture rings and do a little cosmetic customizing of the camera body to help fill in some details, like a shutter button and control dial on the back. You can also flip up the feet of the middle Reflector to imitate the shape of a viewfinder bump. It’s still not perfect, but sometimes little extra details like that can help. 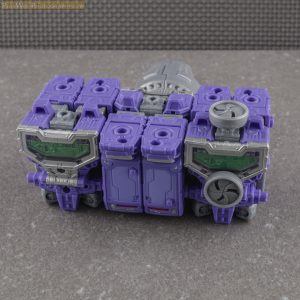 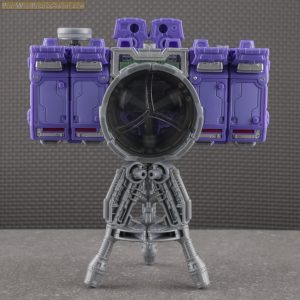 Reflector is, I think, a pretty remarkable accomplishment. Getting a Reflector trio that all transformed together to make a roughly 1:1 scale toy camera seemed unlikely, but they figured out the way to do it. Siege’s design style certainly helped make this even remotely practical, by giving an ongoing excuse to release toys with alt modes that can be pretty brazen about not even trying to be any kind of vehicle or anything. If an individual Reflector had to convincingly become a tank, or aircraft, or Kettenkrad or something, I think it would be next to impossible to have made the camera engineering work.

I imagine some might take pause here and feel like what’s being sold for $20 is effectively an incomplete toy that’s just pretending to be a functional unit all by itself. On some level I don’t think I can argue with that. As much as I do like how the robot looks and feels, and especially how I love the way it comes together with the accessories, if the camera bonus wasn’t there and Reflector was only just what it showed on the paperwork, I probably would not feel great about it for what it costs.

Fundamentally, I think you need to be prepared to make a $60 spend to get three of these to actually get the full value out of any individual unit. That can be a big thing to ask, and I know a fair number of people have already sworn off the trio idea, and as such have probably knocked Reflector down their personal priority lists. I don’t even know that I’d recommend the idea of only buying one. On the plus side, there’s no battle damage, and the sculpt detail level doesn’t cross that line of being overly busy in person. But having a set in hand, I feel more and more like their real value only comes out in multiples.

And that’s gonna suck for me when we hear about the Generations Select or some other special release format of a full set of these redecoed and retooled to be more accurate to the original toys. Cause I’d totally end up buying that too.