And yes, I would still buy a red, chromed G2 version if they made one. 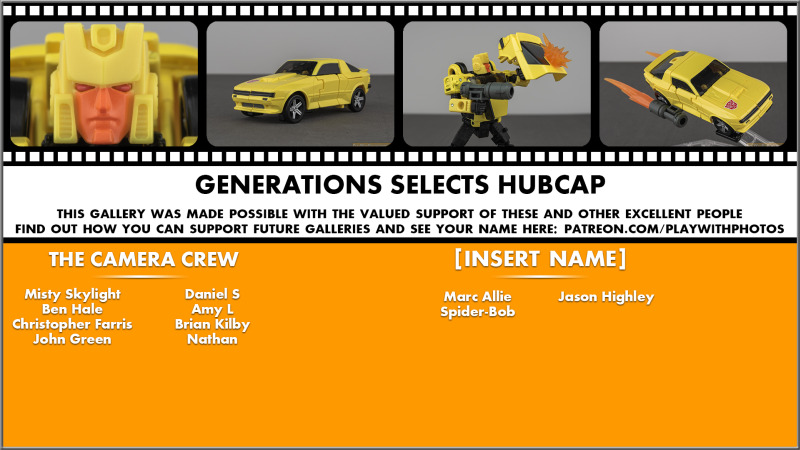 Hubcap went ignored by Classics and Generations for… ever? I mean, we’re coming up on 15 years of Classics And Friends, and this is the first time G1 Hubcap has had an actual update. I was looking forward to that, especially after having my hands on Cliffjumper and seeing that they’d engineered a very solid new mini bot frame.

Hubcap ended up being kind of a pain to work with.

For all functional respects, Hubcap behaves and feels just like Cliffjumper. You can either deal with the rear window chunk coming off or not – it’s not my favorite or first choice, but I’m not angry about it like I seem to be about Arcee’s similar engineering direction – and you either feel okay with this also being sold at $20 thanks to the slightly higher complexity for its size and extra accessories, or not. Those factors don’t really change in this execution. But if you were good with Cliffjumper, you’ll find the experience to be quite the same.

My problem went beyond the functional and more to a matter of how this mold family’s deco planning seems to be set. It wasn’t something that I had quite caught with just Cliffjumper, but the vast majority of the red parts of Cliffjumper are painted. That was almost always obvious on the shoulders where the paint rubs away after a couple transformations. But all the car body pieces are painted too. And the same is so on Hubcap. In the right context, this would be something to celebrate. After all, full-body paint coverage is, especially in Generations and equivalent lines, a pretty premium thing we’re rarely treated to.

Hubcap takes it a step past Cliffjumper by using a super glossy yellow paint. A very, very bright yellow paint. Like, think of a lemon, but made of highlighter. That’s what it looks like in real life. And much to my consternation, it tends to want to photograph even more fluorescent and eye-searingly. Which is typically bad for depicting things like sculpted detail and semi-subtle surface shapes and variations. A flatter yellow, or a little bit darker yellow could have made everything a lot better, both for the experience of just looking at the actual toy, and for someone like me wanting to take nice photos of it. 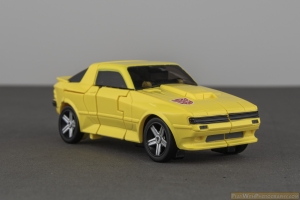 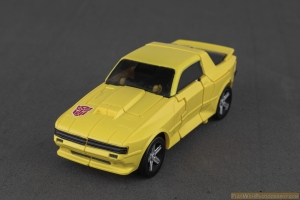 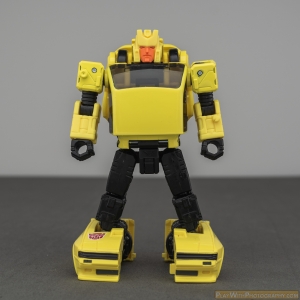 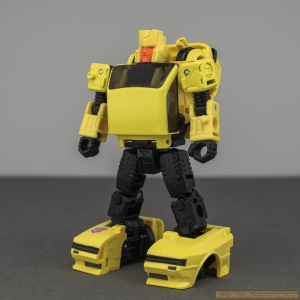 Such extensive paint coverage tends ot worry me anyway. Scratches, chips, and other kinds of wear and tear are a major threat. Although Cliffjumper has been bouncing around here for several months at this point and seems to be in good shape aside from the shoulders. But Cliffjumper is not painted in yellow, well known as the most evil of paint colors, even more vile and detestable than white paint. Despite Cliffjumper as a durability test, I still worry for Hubcap’s finish in the long term.

Getting away from that, Hubcap only has one physical change over Cliffjumper, of course being the robot’s head. It’s a pretty nice rendition of Hubcap, and it’s also one of only like three parts cast in actual yellow plastic. Mine has a small problem in that the head constantly wants to pitch back on the ball joint. I’ve had it off a couple times trying to figure out of there’s a burr or some flashing or something pushing on it, but my results have been inconclusive at best. 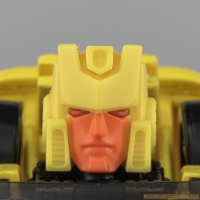 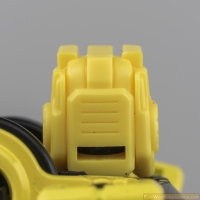 Despite my complaints about how the deco was executed, Hubcap is still pretty fun to mess with and pose. The gigantic feet plus the relatively short legs limit the ways you can usefully pose the robot, but making good use of the guns or bazooka and the car shield plus borrowing some effect parts still leave you with a lot you can do. 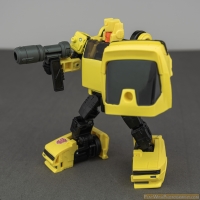 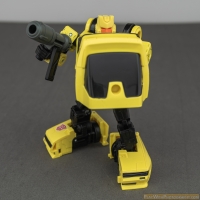 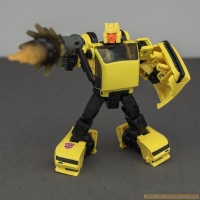 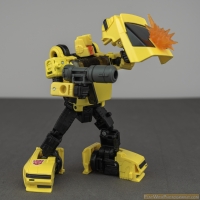 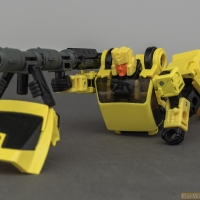 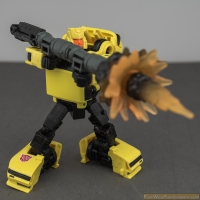 I knew Rotorstorm would be a tough act to follow for whatever Selects I would end up with next, so Hubcap always had the deck stacked against him at least a little. But honestly if not for the paint presenting me with a very specific circumstance of annoyance with it, I think I’d overall be quite pleased with how it came out. And I’m sure as my memory of trying to get good looking photos fades, all I’ll actually remember is, “hey, this is a pretty cool little toy, and that’s finally one more mini vehicle character off the list.”

And fortunately Bumblebee by all indications is a distinctly darker yellow, so I shouldn’t have to worry about a repeat of this in a month or two, even if I still have to fear for the ongoing survivability of yellow paint over black plastic.