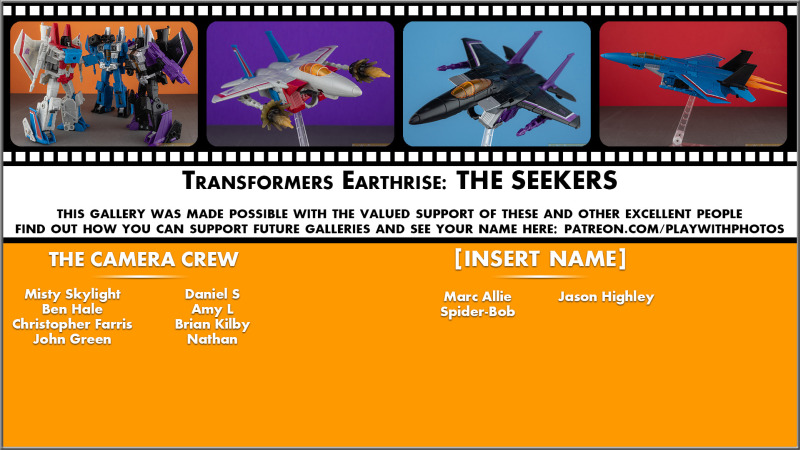 In 2006, Classics Starscream was pretty amazing. The whole “Classics” idea was itself some kind of wonderful novelty and it was altogether too short-lived for my tastes. Fortunately it would make return appearances for the next several years before becoming a full-time staple of the franchise. But, by 2008 – or really even 2007 – that Starscream mold was already showing some of its age. It remained in some sense or another the gold standard for Classics/Generations seekers, and while many successors of different types came along, none quite got it, even if they tried to blind us with sheer numbers. Looking at you, Siege Seeker.

Earthrise finally struck that same chord when was revealed its go at Starscream’s yearly reincarnation. We all knew just looking at it a year ago at NYCC 2019, and then the Hasbro folks went out to flat out say that it was strongly, directly inspired by Classics Starscream. Which leads us to a disturbing scenario, wherein this mold is not a Generations version of a G1 seeker, but instead it is the Generations version of a Classics toy. A direct update of an update. We are that damn old now and I hate it.

But I love the Earthrise seekers. 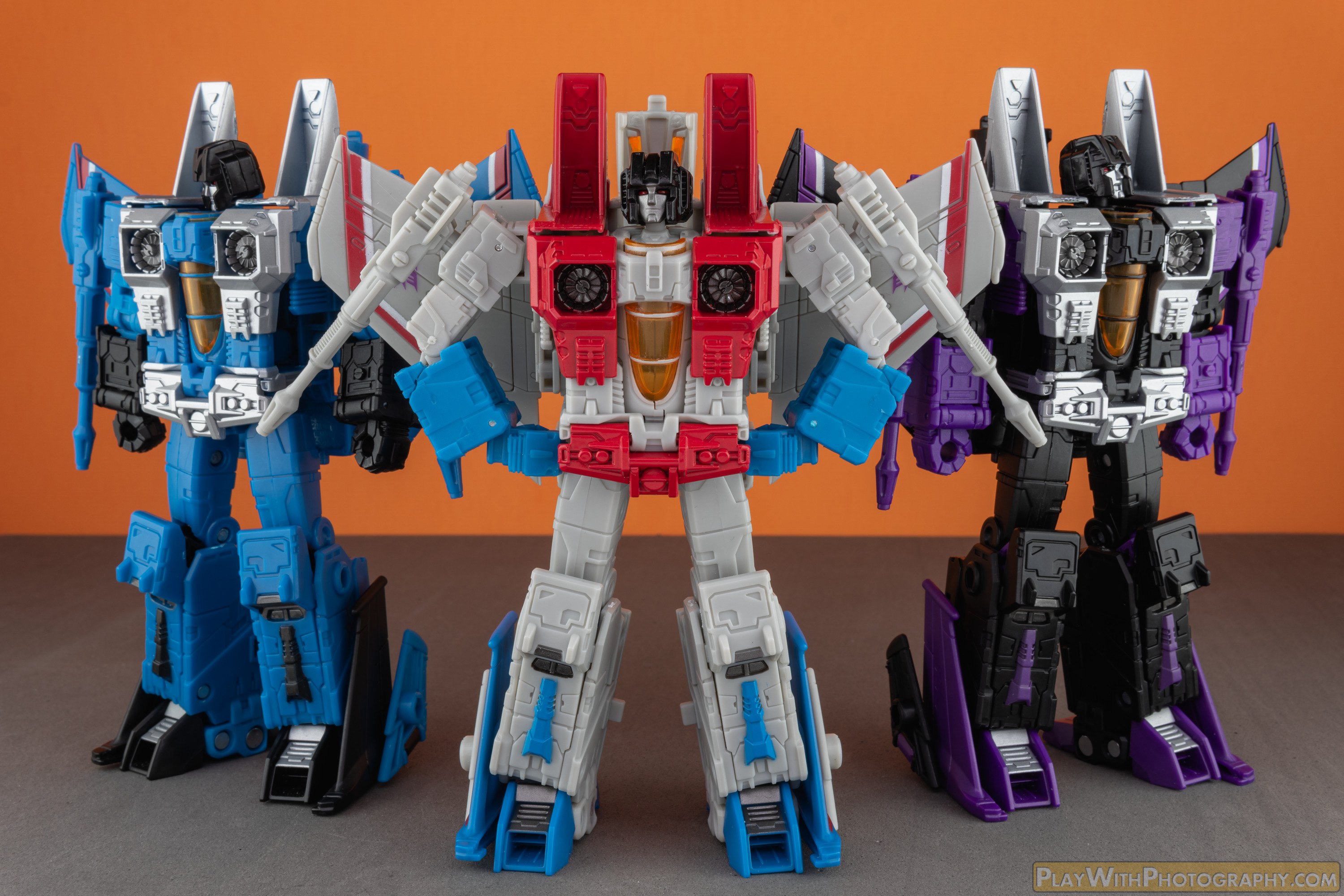 Starscream preceded Skywarp and Thundercracker by some months, as is usually the way of things. It was by far my most anticipated thing from the first wave of Earthrise, and boy it did not disappoint. I mean, if I wanted to nitpick, I could say I wish it had wrist swivels like Siege Starscream. That’s the absence I feel the most in handling this mold. But wrist swivels were something of an unusual luxury on the Siege version anyway. 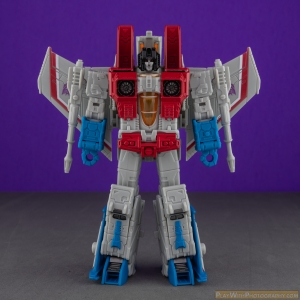 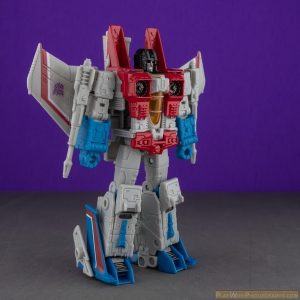 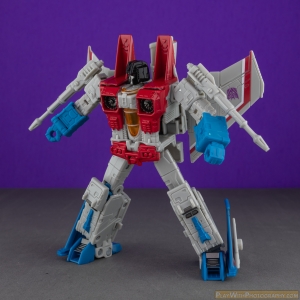 There’s no waist joint, but I can’t say that I’ve missed it at all. if it was there I’m sure I’d find use for it, but I haven’t been looking for it, and it’s been like half a year already. One weird thing I might wishlist is a change to the attachment for the null rays. I’ve felt that their range of motion feels a little limited; it’s hard to get natural-looking positioning with some arm poses. A more complex shoulder joint could perhaps help deal with this. Likewise might attaching them to the biceps, below the upper arm swivel so they can rotate around the arm. Again, this is a very particular kind of issue to take which I mention pretty much only for the purpose of having something other than blind praise for the mold here. 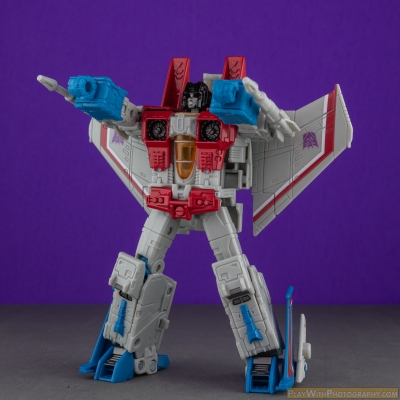 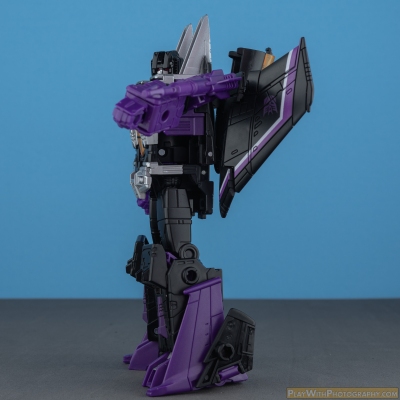 Skywarp and Thundercracker, infamously for a while there, are exclusive to Target in the US. I think in Canada Toys R Us got them, and elsewhere in the world people …have been getting them from people in the US and Canada, I guess. The availability at Target was a mess starting out. Online availability came in bursts of 90-120 seconds at a time, and then they were gone again. It was extremely common to have them disappear in the time it would take to simply get part way through checkout. Much frustration was had. But before very long, I cracked the pattern and managed to be able to predict them going in stock and became able to order

them quite reliably, which was an incredible feeling of satisfaction, let me tell you. 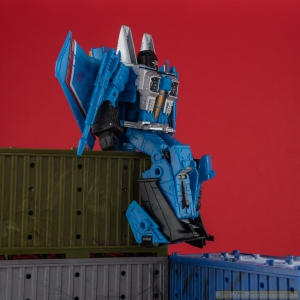 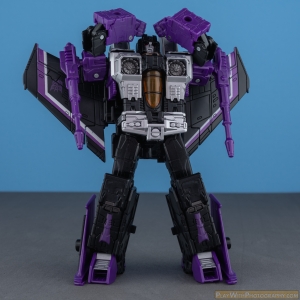 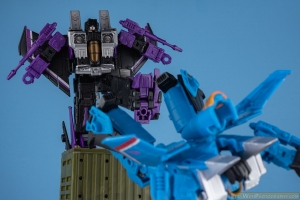 These two introduced new face options to the seeker mold, and that gets a bit complicated. Obviously Skywarp has a distinct new face where he’s either expressing Dull Surprise, or just screaming at the universe; who can really say? Thundercracker remains neutral …except when it doesn’t. Let me explain.

The eyes in the seeker mold are not part of the face. They’re either a fully separate piece from the head, or part of the back half of the helmet, I don’t specifically know. There are two styles of eye that are available for this mold. There’s the large, basically neutral ones as seen on my copies. There are also eyes that are smaller and more angular, making the face look angry or hostile when used. I don’t have a version of the mold with that to demonstrate, unfortunately.

What we’ve learned though is that any instance of any of these three toys can have either of those eyes at random. These two packs had a more or less even split from the disturbing number of samples I personally had pass through my hands and examined – some of the sets even had one seeker with one type of eye and the other with the second type. It’s also been found that the second run of Starscream that shipped with Snapdragon also had the “angry eyes”. The ones I have are fortunately to my preference. But I kind of imagine at least Skywarp was supposed to have the angry eyes since it ties together better with the screaming. 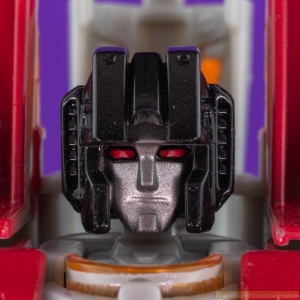 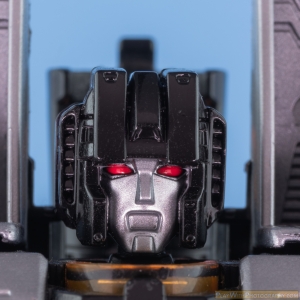 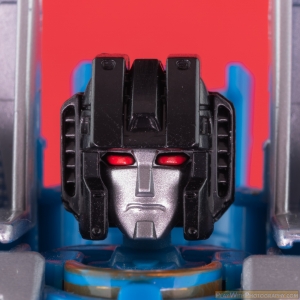 An issue is known to exist with these two, where the front skirt flaps might crack when moved. It’s the result of the silver paint applied to them, usually. It makes the fitting on the friction hinge too tight, and can start to bend the piece when the hinge is used. It can be solved by carefully popping those panels off and filing or sanding away some of the paint on the inside of the hinge surfaces. It’s imperceptible when the piece is reattached, but it makes a drastic positive difference to the fit and movement, and eliminates the chance for breakage.

I love how the transformation is engineered for this mold. I found Starscream a little difficult to work with in the beginning, but Skywarp and Thundercracker were a lot smoother out of the box overall. Getting the arms stuffed in the torso correctly and clipping the chest plate in and out of place took some getting used to, and in general I’m still not entirely a fan of how the chest works since it’s a painted surface on every version of the mold. But at least it’s not the Cliffjumper mold family with the painted shoulders that don’t survive even one transformation thanks to the part rub.

The jet mode is a thing of beauty in any deco. And it surprised me at how large it seemed. Benefit of a generous wing surface, since the core body portion is about average volume for a Voyager these days. It’s just really satisfying to handle though in a way that’s hard to express specifically if you haven’t already had a hands-on with the mold. 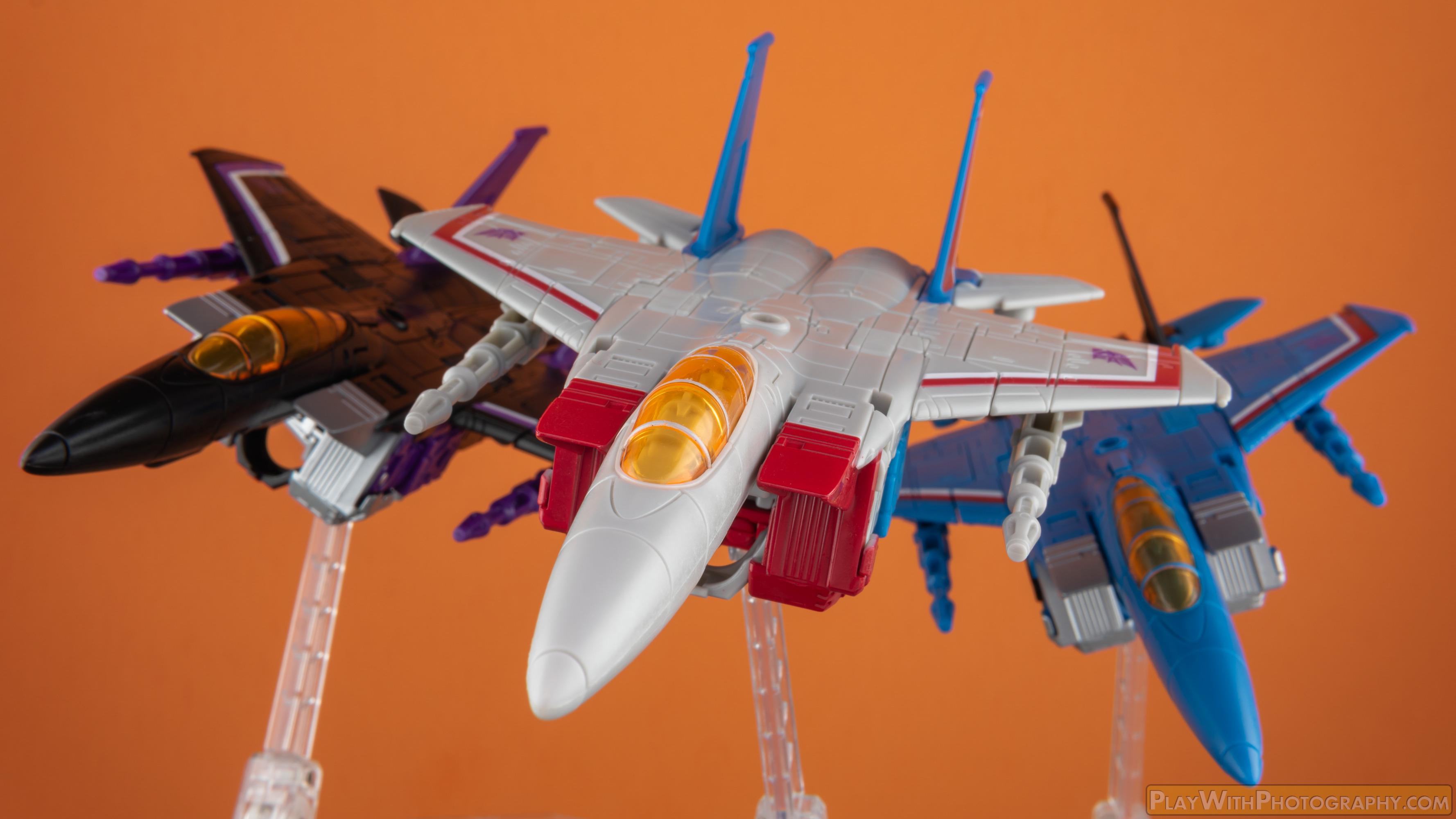 While all of them look great, I find (as is often the case) that Skywarp makes the best presentation for the mold, just edging the others out by a bit. Black, silver, and purple in this layout just works some kind of magic. And the plastic catches light in a really pleasing way, offering smooth, clean highlights that set off the shapes wonderfully. 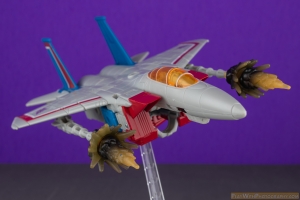 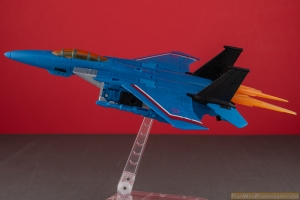 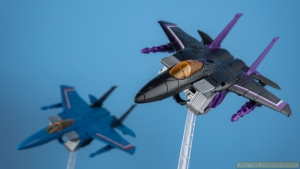 I guess I should make a confession though: Thundercracker isn’t this color. It’s virtually identical to Siege Thundercracker. The blue is a bit toward the turquoise in a way that I can’t figure out how to correctly represent in photography. I’ve spent a not small amount of time working on the problem between the Siege toy and this one, and while I don’t want to say definitively, I don’t think this color exists in RGB colorspace. It requires adding green value to blue and getting a darker color out of the mix. But RGB colors works by making the color lighter as you add to it. So add any green to blue and you get teal, not turquoise. It’s mildly maddening, but I eventually just had to accept it and carry on. For what it’s worth, I wish the toy was the color it photographs. 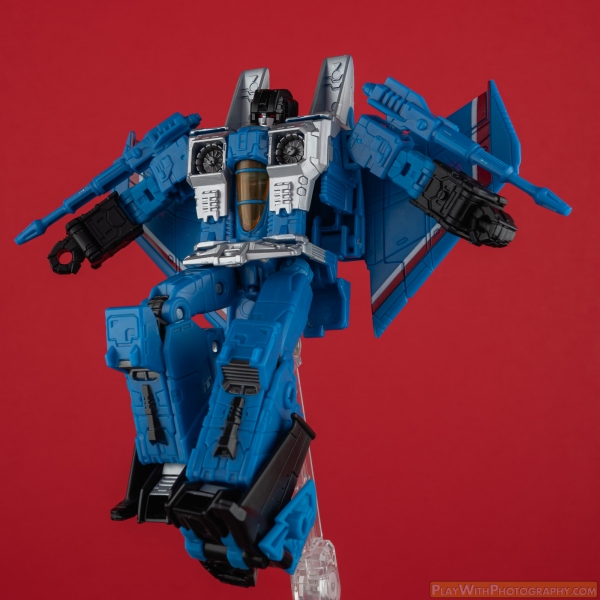 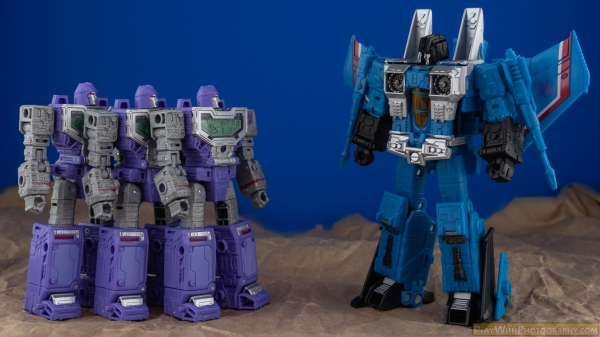 Putting all three of these toys together as one feature was probably the same amount of work as breaking them out as individual galleries, but I can’t imagine I’d have actually got all three done if I’d tried to do them separately. The repetition would have been awfully repetitive and probably killed my motivation halfway through the second one from the repetition of it. As is, I spent close to two weeks putting this gallery together. Giving myself healthy breaks along the way turned out quite important in terms of maintaining steam on this project. Despite that, I have no regrets at having three near-identical copies of this mold. It is for all intents and purposes everything I’ve wanted out of a Classics Starscream (and friends), and I’ll keep buying it. I have G2 Sandstorm on order, and …well, Dirge and Ramjet got screwed up for me (THANKS, AMAZON) and the going rate on that set right now is unfortunate. But I guess as long as I have that worked out by the time Thrust is available, I can do a Now That’s What I Call The Seekers, Volume 2. Look forward to it! 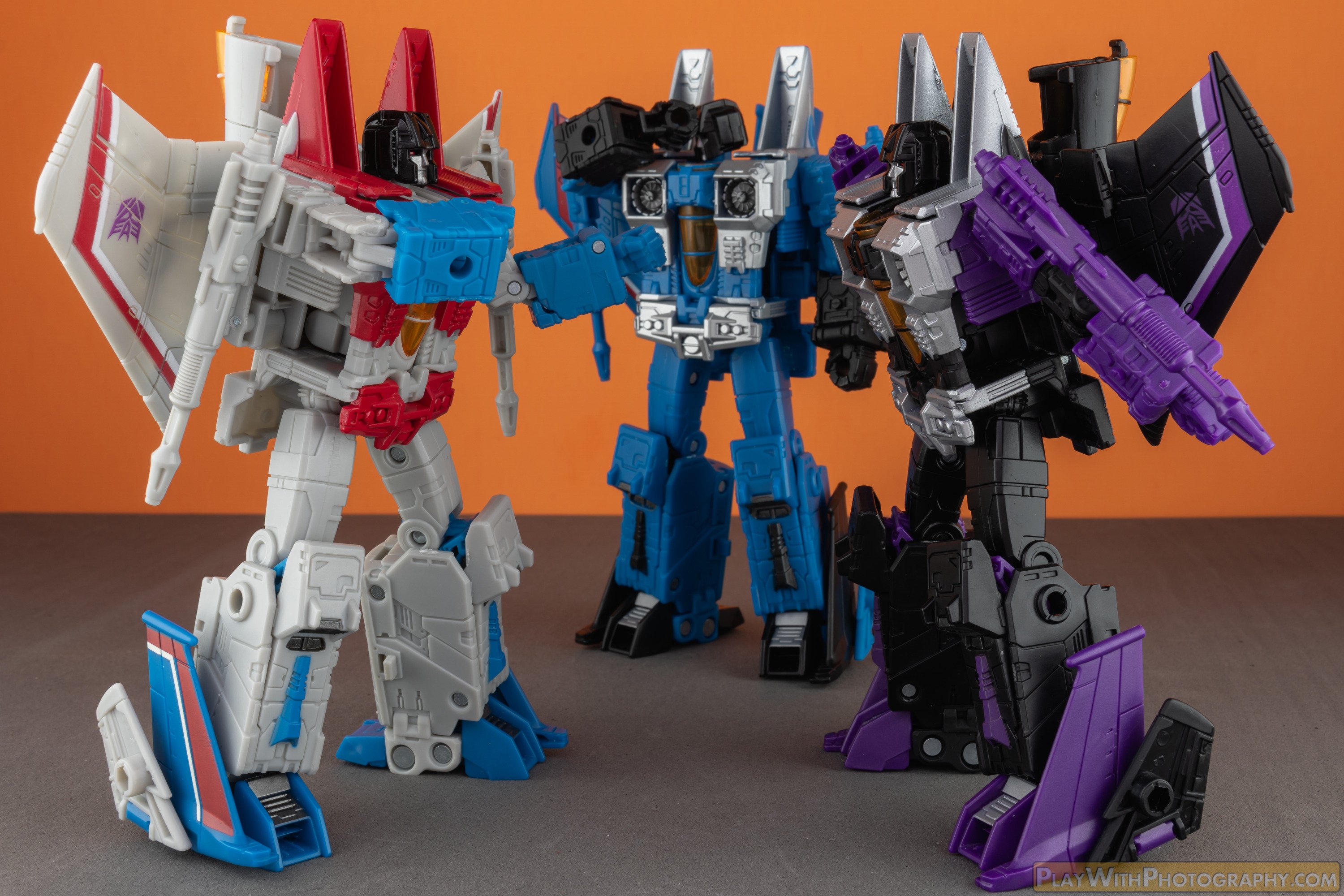